Which One is Your Thread? 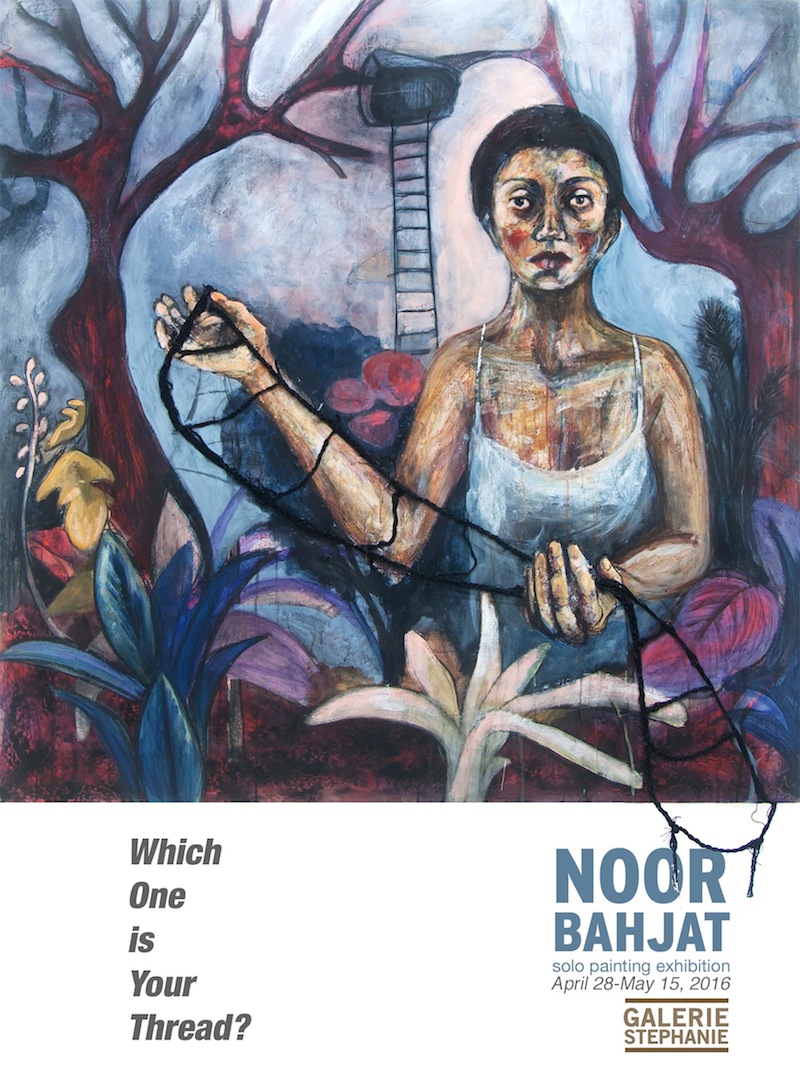 “Treading on Thread: A Young Artist’s Visions of This Interconnected World”

There are a multitude of things flying and colliding in Noor Bahjat’s head that, if manifested as tangible bursts of pigment, patches of light or plaits and knits of intertwined color, her mind will resemble a riotous, vivid patchwork of endless quilt.

Quilts are made of patches of seamed and stitched cloth and without such stiches and seams, which bind and join, the patchwork falls helplessly apart. Now, under a more minute deduction we know that cloth is made of thread. Weft and warp, hand in hand, on and on, and over and over again until this weave, deceptively insubstantial and uninteresting at first, becomes whole cloth. Thus, in its basic beginning, it is essentially miles and miles of intertwined thread, much like how our bodies are made of countless cells that make up tissues, that make up muscles that make up organs that make up our humanity and mortality and therefore makeup our life, and ultimately, our death.

There are only two perpetual, all-encompassing truths in this world, according to the twenty-four year-old Syrian artist—love and death. “Which One Is Your Thread?” is Noor Bahjat’s first show here in the Philippines, and the exhibition is a culmination of her three-month long stay here in Manila. Projected upon her canvases are expressive daubs and strokes of paint that thrust and offer poignant musings and the most contemplative of gazes. Visually relayed by big, knowing expressive eyes they are ones that manage to appear glazed yet penetrating, and they hold and sustain you in some strange, hypnotic suspension.

Born and raised in Syria, her motherland’s current political condition has entailed her and her family to depart the country almost five years ago for the glimmering desert emirate of Dubai. She graduated with honors at the University of Damascus and her last exhibition and residency was held at Ayyam Gallery in Dubai. Noor is the first recipient of Galerie Stephanie’s first-ever artist-in-residency program. Since February, she has found herself embedded in the middle of this colorful megalopolis that is Manila, sometimes surrounded by oceans but always by spectral contradictions and feverish contrasts. “One of the very first things I saw in this country was how huge the gap between the rich and the poor is.” She paints a disquieting portrait of this searing observation in one of her paintings, a diptych with a contemplative woman, placed right at the very center of its middle edges. Noor uses the twin panels of the diptych to paint a portrait of a woman living two parallel, yet starkly different lives. The woman personifies all of our kasambahay—kasama sa bahay—the one who lives with us in our homes, the one to whom we entrust our domestic concerns and household drudgery, the one who offers service to fulfill the work that we otherwise dismiss to be too menial and minutiae to do. One of her halves reside in a stately house, the other rides the jeepney, perhaps taking it to return to her own home. There are two inextricably intertwined—yet somehow irreconcilable—strands to the thread of her life. She is link and conduit between these two worlds, two parallel lives running together. It can be said that no one is exempt from this system; we actively participate in it as we employ and are employed in some way or another.

Since arriving in Manila Noor has learned, with a contented surrender, to take her time. The artist is a ball of frenetic energy, and admits to being so. “It is more real here”, Noor says of her newfound powers and independence. Nature is slow and steady, and so she chooses to do likewise. “I no longer just look at things now, I take my time” she remarks. And one would have to agree—it takes a certain kind of sensitivity to distinguish mere looking, from actual seeing. Flora and natural forms populate the body of work she has completed here in the Philippines, and it is a small, albeit symbolically significant departure from her older work. There are shades of blush and other diluted colors that temper and work with the potency of her subject matter. It is this kind of balance that she has vigilantly labored on and painstakingly tried to earn for the past three months, to effectuate an equilibrium of sorts, not only in artistic creation but in the whole sphere of life and living as well. The gravity of her newly strengthened powers of observation has enabled her to not only position herself in this world of linked everything, but to question that very position as well. Here she questions her who’s and what’s and where’s. Privilege, duty, hopes, dreams and desires, war and peace—to Noor it is all a state of mind. You are what you make of your very existence.

Underneath all the paved structures that link nations and civilizations, there is a latticed, highly complicated, multilayered network of virtual highways and of intangible threads and strings that link everything and nothing at the same time. This paradox works because this age has laid out right before us an intricate, ever-growing system of mindless consumption and minute gratification, blanketing us in both isolation and connection. It has turned consumption into a sport, and without the necessity of careful digestion. In the history of man, never have we ever been more connected, but never have we ever felt more isolated.

Noor Bahjat’s work takes us to confront this predicament as well. One of her portraits, reveal a woman who holds up her brain almost like an offering, as if to say, “I surrender it and it is now yours”. Bereft of hair and skin and scalp, exposed is a bloody cranium in which placidly sits, as if it were a hat, a jellyfish. Its placidity is deceitful. In all the twenty thousand leagues of the sea it is one of its most infamous, quintessentially dangerous beauties. It is beautifully hypnotic and translucent—diaphanous like floating tulle—and appended to this gossamer body is a set of tentacles, undulating here and there. It preoccupies you in a trance-like haze, and all at once you are in its clutch and grasp. An electric tingling first, then a sharp, agonizing white-hot sting follows next. It is a fitting metaphor for ‘the system’, an almost mythical, most pervasive power of man-made omnipotence that has deftly and seamlessly coiled and wrapped its tentacles around living, breathing things.

It is in this intricately veined, strung and threaded network of subliminal messages, force-fed information, mental and emotional conditioning that we are reminded at once of George Orwell’s prophetic tale, 1984. But what is perhaps most unsettling is that Orwell’s most famous work is no longer a prophecy. 1984 has already seen its fruition. It is here, and it is now. We are living, but have been devoid of life. Noor Bahjat is acutely aware of these changing times and declares: “I refuse to be brainwashed. I want to live my life the way nature intended me to”.