A feature on social realist Proceso Gelladuga in the newspaper Manila Bulletin. 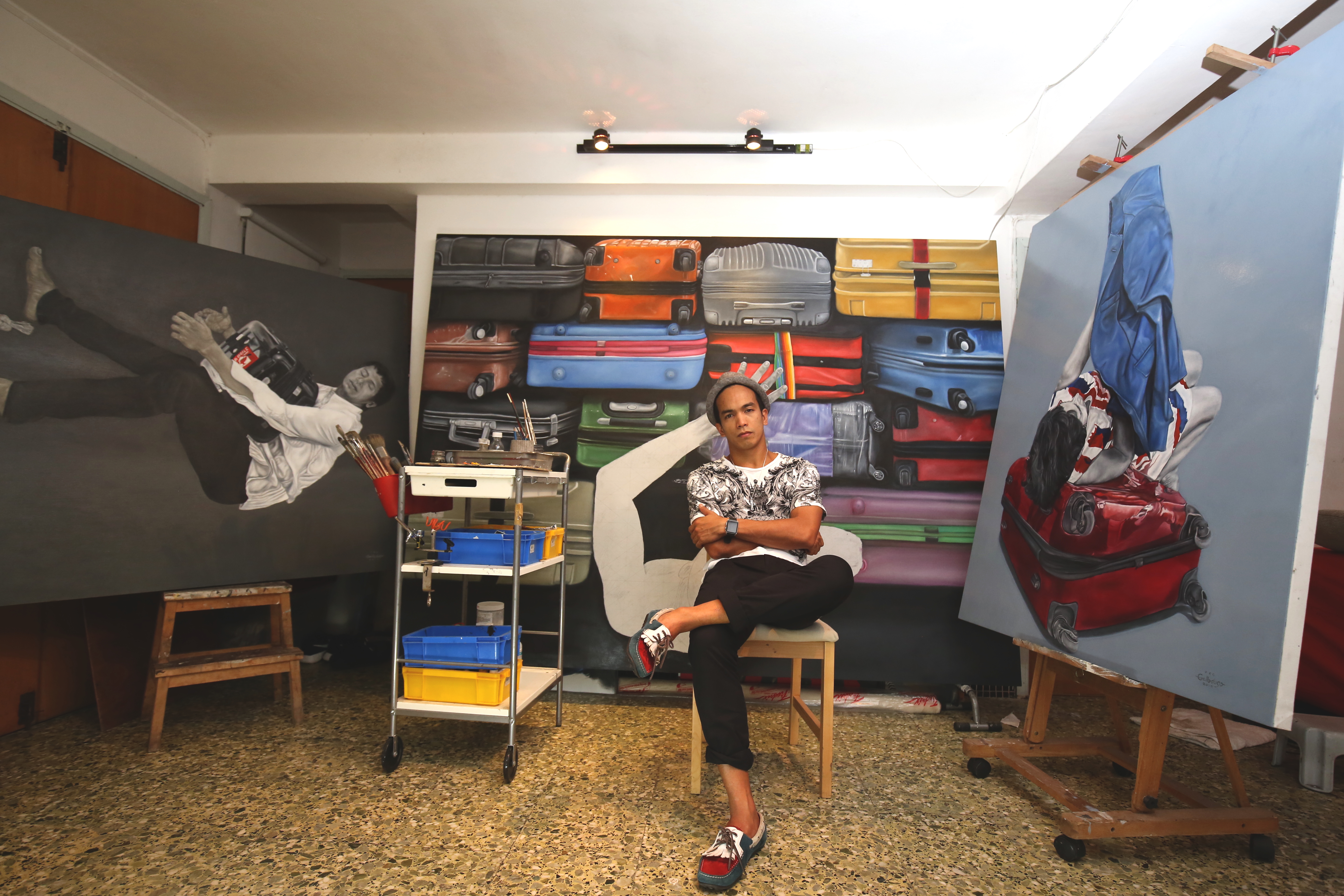 Proceso Gelladuga II surrounded by pieces from his ‘Maleta’ exhibit

There can be no doubt that Proceso Gelladuga II was destined to move people, through movement. In fact, one can say his destiny has been foreshadowed when he was christened Proceso, a distinguished name of Latin origin meaning, “He who moves forward.” Indeed, Pro, as he is known among his friends, did move forward, as well as in all other directions and toward new and exciting genres.

Ever since he was a member of his college dance troupe in Negros Occidental, he had known that he was meant to be a full time dancer. His passion and discipline allowed him to refine his skills consistently, which led him to many opportunities that further solidified his name, both locally and abroad. He was intoxicated with the dynamic expressions that could be captured within deliberate, subtle, and elegant movements, hopelessly drawn to the emotions that passed in between two pulsating physical energies. In fact, this was how he met his wife, Nina, who has been his dance partner and collaborator since the first project they did together at Green Papaya in the early 2000s. “We know how each one moves. It’s so easy to make our ideas flow into our bodies,” he says.

While his incredible talent led him to many notable projects both as a dancer and choreographer, another love affair was brewing between him and another mode of self-expression: Painting. He was, after all, surrounded by immensely creative and talented individuals, who also served to further stimulate his interest. “My good friend Nona Garcia has influenced me early in my career,” he says. “Of course my father-in-law and mentor Renato Habulan has always been guiding me. I learned so much from watching them work. I also admired Lucian Freud and his flesh tones, simple composition, and bold brush strokes. They influenced much of my earlier style and technique. As I had no university training, except a few short courses at the Hong Kong arts school, these influences, especially my mentor, have helped my work evolve these past few years.”

It began with a few portraits for his friends, until it became a refuge he would escape to when he had grown tired of the rigorous rehearsals he would undergo. This love blossomed into a full-fledged artistic pursuit. He was committed to learn, and though he had very little formal training, with ferocious dedication he approached each painting though his self-imposed methodology: “My painting process is much like my choreographic process,” says Pro, “Dance. Movement. These are primary forces in my art making.”

His deeply ingrained knowledge of movement inspired him to make the subjects of his paintings dance within the confines of his canvas. He also credits the dialogue and exchanges with his wife as an integral part of his conceptual development. His careful rendering gives his poignant monochromatic pieces, which are set off by bold red and blue hues, the gift of fluidity.

“There are a million ways to move. In art, as in dance, a single idea can be interpreted a million ways. I think because I don’t confine myself to a certain style, a certain way of painting, I am able to approach each painting differently.”

Maintaining his position as a dance instructor and choreographer, he is determined to paint as a full-time artist. Boxes and luggage are predominant images within his oeuvre and this is mostly a result of his reflections throughout his travels. With international projects bringing him to many countries throughout his prolific career as a dancer, he saw the harsh realities facing Overseas Filipino Workers (OFW). His experiences and encounters only reinforced his desire to portray and speak for his fellow Filipinos. As he continued to delve into the issue of migration, which has always been a subject of interest, he began a dialogue through an artful and metaphorical depiction of the maleta, or luggage. In his hands, the maleta is not merely an inanimate object, it is an extension of the owner, carrying its own distinct and intimate history and divulging the yearning for home and familiarity.

This was most evident in his recent exhibit at Galerie Stephanie in which he showcased his unique representations of a much discussed topic. Entitled “Maleta,” the show serves as his tribute to all those working for sustenance and a better life, their sacrifices and their struggle to assimilate with different cultures. He elaborately encapsulates the heavy strain suffered by laborers, and the monetary obligations that leave them trapped in foreign shores. “It is a vicious cycle that leaves them tied up. No matter how much they want to save, it’s just not possible.”

In his latest exhibit, which serves as his 8th to date, Pro examines the hardships by capturing their hopes, dreams, and difficulties through mundane details and candid snapshots.

“It (the ‘Maleta’) is a symbol of hope, of a promising future but at the same time it is also a symbol of heavy burden, pain, loneliness, and danger,” he says. “A gilded cage you may call it. These new works emphasize the general situation of migrant workers here. I am lucky to have found my calling in painting and dance. There are a lot of us here in this profession and we are lucky for that. But the other OFWs, they have a heavier burden to carry.”

This is only the beginning for Pro Gelladuga, as he continues to expand his artistic repertoire, living according to a simple and straightforward creative philosophy: “Don’t hold yourself back. Be bold, be brave. Don’t be afraid to explore. Never conform.”