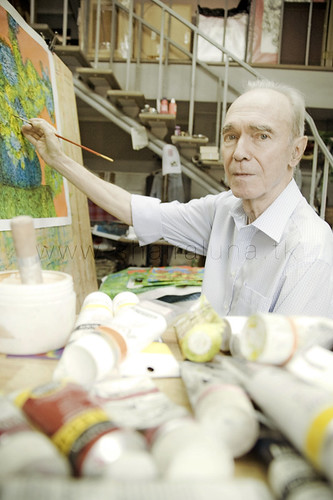 Juvenal Sanso was born in Reus, Catalonia, Spain in 1929, but moved to Manila five years later, where his family established a wrought-iron business.

He spent most of his younger years with private tutors, until his enrollment as a special student at the UP School of Fine Arts under such professors as Fernando Amorsolo, Dominador Castaneda and Ireneo Miranda, and later at the UST. In 1951, a banner year for the talented young artist, he won first prize in both the oil and watercolor competitions of the Art Association of the Philippines for the respective paintings Sorcerer and Incubus.

During the same year, he also won third place in the Shell art competition and left for further studies in Europe and studied at the Academia di Belle Arti in Rome after establishing residence in Paris. He also enrolled at L’ Ecole Nationale Superieure des Beaux-Arts.

Sanso held his first one-man show in Paris then came home in 1957 for his first local one-man show at the Philippine Art Gallery. He has since continued travelling extensively and holding solo exhibitions in Italy, the United States, England and Mexico and coming back to Manila regularly for occassional shows. In 1964, another significant year, his works “Leuers” was adjudged Print of the Year by the Cleveland Museum of Art, giving Sanso the rank of previous winners like Henri Matisse and Salvador Dali. In the same year he held a major all-media one-man show at the Cleveland Museum of Art, as well as one-man shows at the prestigious Philadelphia Print Club and New York’s Weyhe Gallery.

In 1966, Sanso had a 20-year retrospective show at the Makati Commercial Center. In 1974, a 25-year retrospective was held at the Cultural Center of the Philippines. In 1976, in commemoration of the Manila World Bank and the International Monetary Fund summit meetings, Sanso held a one-man retrospective of some 1,000 works, released a portfolio of 10 lithographs on Philippine subjects, and was the subject of a book written by Alejandro Roces. In 1989, he made a milestone by doing six simultaneous exhibits in Manila at the Metropolitan Museum, the Lopez Museum, the Ayala Museum, the Center Cultural de Espaha, the Alliance Francaise and the Finale Art File.

Today, the angst-filled grotesqueries, which eventually evolved into stunning surreal bouquets of faces and heads, are all gone now, replaced by genuine blooms which still appear, however, in the most striking shades of red, green, orange and blue. He paints in watercolor, acrylic and his favored ink and dry brush medium. He also continues to produce fine etchings in a very dynamic, strong-lined style. Sanso remains an innovative, respected and highly in demand artist today.