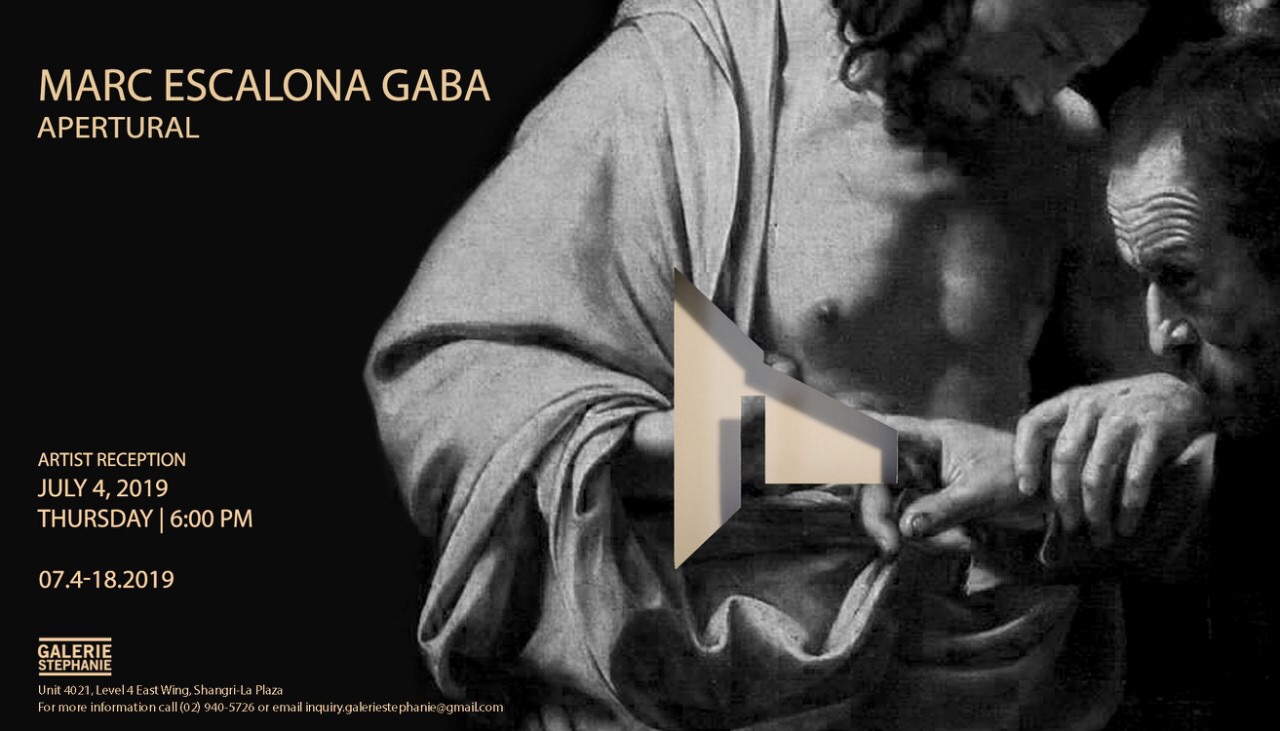 There are spheres other than the contemporary, although each of us has only two hands.”

Rare in Philippine contemporary art, Marc Escalona Gaba’s approach to painting has been purposively expanding the idea of what a painting could be. This has provided vital originality to his work and remarkably, he has been developing ideas continually over the past decade, expanding principles in depth and breadth. The paintings that he calls “apertural” are a product of this exploration, and in Apertural, his 20th solo exhibit, he takes them even farther.

The apertural paintings, which first appeared in 2011, can be considered to expound on one of Gaba’s credos that image is space. They appear to be rooted to his 2009 works in Where or When (Silverlens Gallery, 2009) in which he cut out areas from photographic reproductions of Edward Hopper’s paintings, retaining the lines and leaving the human figures untouched. But the cut-out areas were the point; they emphasized the void—space—precisely as the defining element of the image. This resulted in giving importance to absence, appropriate for a show that dealt with nostalgia and the present.

Gaba’s apertural paintings are two canvases mounted together. The outer painting features the aperture, a shaped hole cut through its canvas, that allows the viewer to see the other painting behind. Surface and depth are recast as exterior and interior, and as the image varies according to the viewer’s physical point-of-view, the visual experience is always and each time, individual, unique, and new: they could not be viewed in the same way twice: vision is in motion.

The earlier apertural paintings are abstract and highly textured; they appeal in principle to the sense of touch. The tactile qualities emphasize the three-dimensionality of the apertures that then cast light and shadows within, on, and outside the works. While the haptic apertural paintings straddle painting and sculpture (but a different kind of sculpture, in that rather than take up space, they create more space), the paintings are imbued with the element of time and contemporaneity, the painting always tied to the present and the environment in the presence of the viewer.

Gaba’s most recent apertural painting deploys three new elements. Firstly, figurative images now appear on the front panels. Landscapes appear the most, reflecting his relocation from crowded Cubao in Quezon City to the rural, open fields of Tarlac. Secondly, the shapes of the apertures are referentially figurative as well, based on sections of an unbuilt house that he has designed for himself. These two elements, therefore, tether the works to the artist and the experience of relocation; as developments from the early formal abstraction to the ambiguous abstraction of To See Into the Coils of Matter and Read in the Folds of the Soul (Fundacion Sanso, 2018) to the clear pictorial images based on observable, physical reality now, the changes are forms of relocation. Personal, private experience is abstracted, and as they retain figuration, the ancient divide between abstract and figurative is surpassed and transcended.

Yet the major new element is the use of the actual walls of the gallery as his second painting, where the shape of the aperture is painted large and white against a black background, so that the oil panels—of landscapes, horses, a nude couple; according to the artist, these are images “of the palpable potentiality of freedom”—bear the void in which they are also sited. And where previously the second painting was inside, here they are both inside and out: the realist oil panels are part of the space where they are located. This is far more than site-specificity; the bold originality is the idea that site can be moved. Instead of the painting as part of a room, the room is part of the painting. This illustrates another aspect of Gaba’s artist credo: “An image does not so much occupy the space between object and perception, but is the space itself.”

Apertural takes art to exciting directions. They highlight the importance of space in relation to painting, and painting in relation to space, making us imagine new questions: where does the painting end, and the room begin? Consequently: where does the image of the painting exist? In a time when documentation is continually and increasingly subsuming the role played previously by experience, these conceptual yet aestheticized works remind us anew of painting’s crucial rootedness in time and the body.