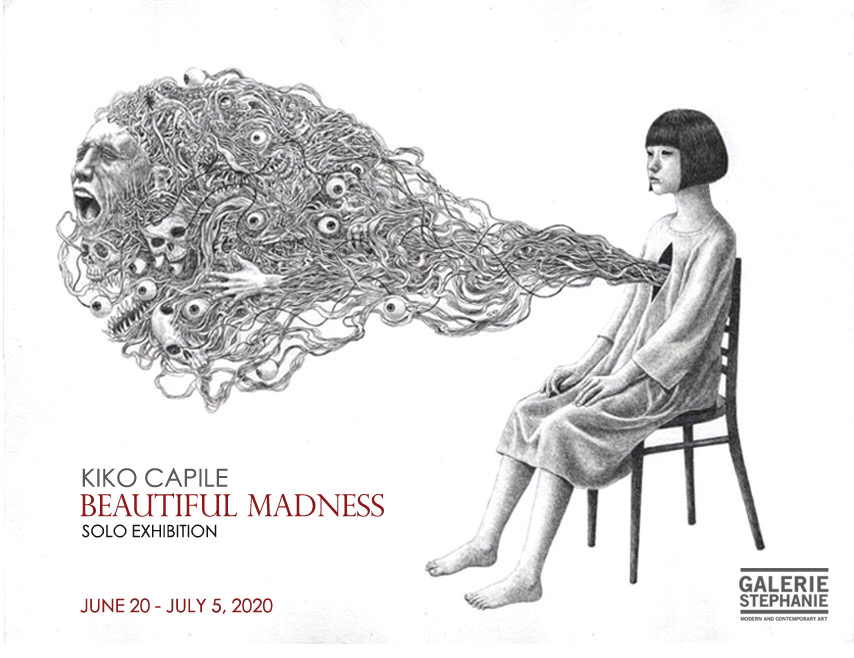 It is a winding braid of affects and thoughts that make Kiko Capile’s artworks difficult to define. Devoid of the verve and shock that attend spectacles of horror common today, the lingering effects of Capile’s dark art unto the body taps into a far more primal fear. Tendril beds interlocking, rows of gnashing teeth, lashing tentacles, unblinking eyes—these motifs insist on visceral forces beyond what we deem familiar, which run along the edges of a strange, uncanny kind of want.

After more than a decade of juggling his art-making with a full-time job as a senior graphic designer, Kiko Capile will hold his first-ever solo exhibition, Beautiful Madness, with Galerie Stephanie on July 20, 2020. Through an array of elegant pen and paper artworks drawn in intricate detail, Capile coaxes the internal monstrosities of his subjects into the light, whether by a small slit across the skin or with the entirety of the dermis cut asunder.

Outward appearances no better than a theater scrim. By depicting supple bodies that nurture the chaos inside, who yet wear faces that belie civility, Capile captures the dark and the grotesque and renders them with such caring detail that we cannot but welcome this allegedly intolerable domain. With each tempered line, shade, and hatching, Beautiful Madness constitutes a critical project: to show what can’t be seen, to convey unspoken privacies as perceptible and felt.