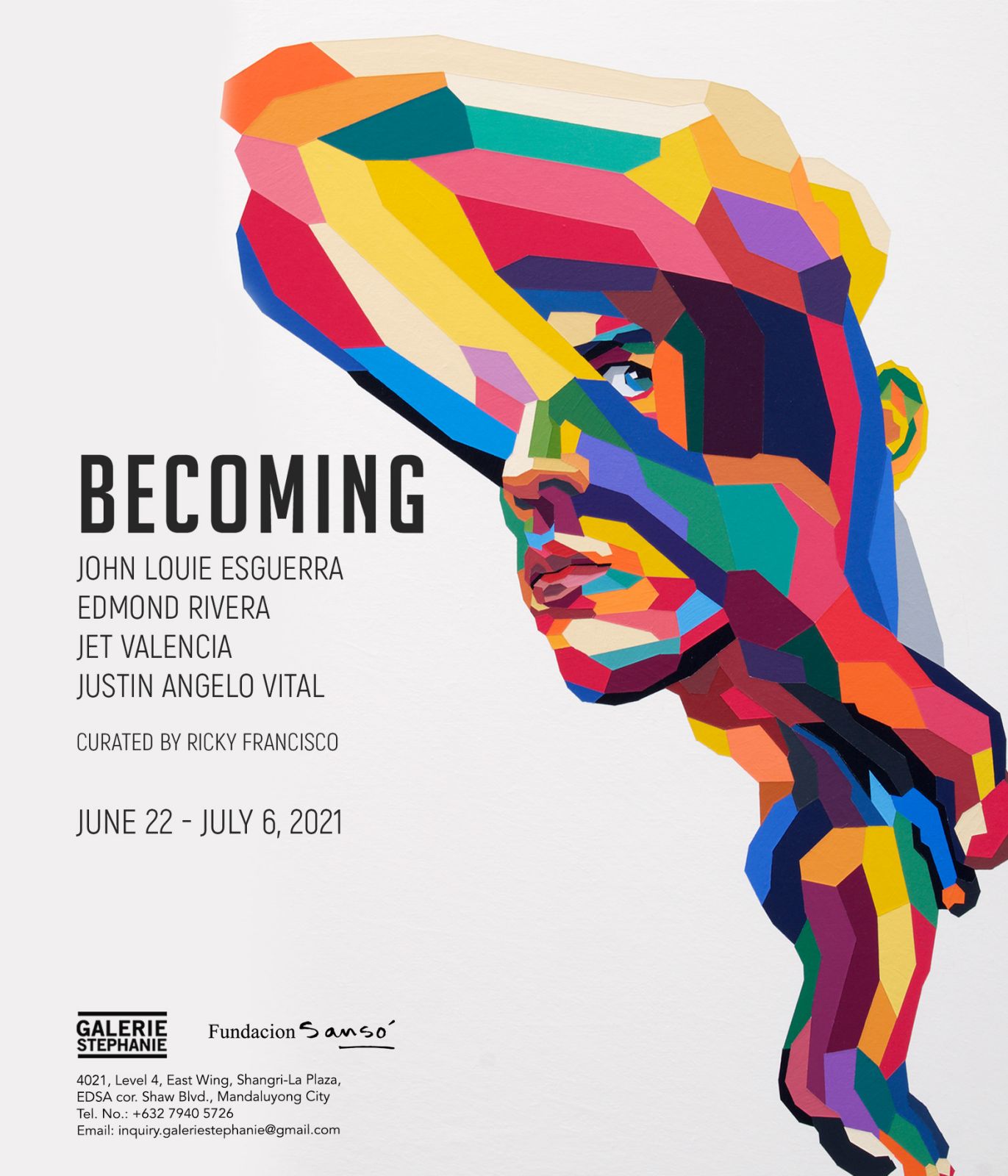 At first glance, the different subjects of the artworks created by the inaugural winners of Premio Sansó seem disparate and incohesive. But a closer look show that the works are in some state of BECOMING.

A bahay kubo made seemingly human, body parts evolving, a consciousness for the environment, a child being taught to mold clay by his grandparent – all point to the start of something that may become great.

Premio Sansó honors the role of the art competition in Juvenal Sanso’s artistic career. And it aims to give the same competitive edge to these winners.

BECOMING is a joint project between Fundacion Sansó and Galerie Stephanie.

A native of Pulilan, newcomer John Louie Esguerra (b. 2000) is a third-year fine arts student from Bulacan State University. Most of his pieces revolve around ecclesiastical or liturgical themes, getting inspiration from the masters of the Italian Renaissance. His primary mediums are oil paint, acrylic, and gouache. Esguerra has won second prize in Premio Sansó 2020 for his piece “The Mind Weaver”.

Currently based in San Miguel Bulacan, Justin Angelo Vital (b. 1996) is a graduate of Bulacan State University, finishing Bachelor of Fine Arts in Visual Communication. Combining the architecture of slums and the human body, his works depict the movement of people in crowded spaces, narrating poverty, migration, and lack of privilege. Vital has won awards in various competitions since 2019, including the Grand Prize Category in the Shell National Student Art Competition, Special Winner Prize in the Cocolife Colors of Life Competition, and the First Place category in Premio Sansó 2020. He has also participated in group shows in Ysobel Art Gallery, Arte Bettina, and Cevio Art House.

budding visual artist Jet Valencia (b. 1993) has developed a distinctive style of utilizing bold and vibrant shapes to outline his subjects. A graduate of Fine Arts and Business Administration in Bulacan State University and Centro Escolar University, he has been joining group exhibitions since 2014, including Metro Gallery, Village Art Gallery Ysobel Art Gallery, and Galerie Stephanie. Jet’s geometric forms paired with his signature playfulness has earned him a third-place finish in Premio Sansó 2020.