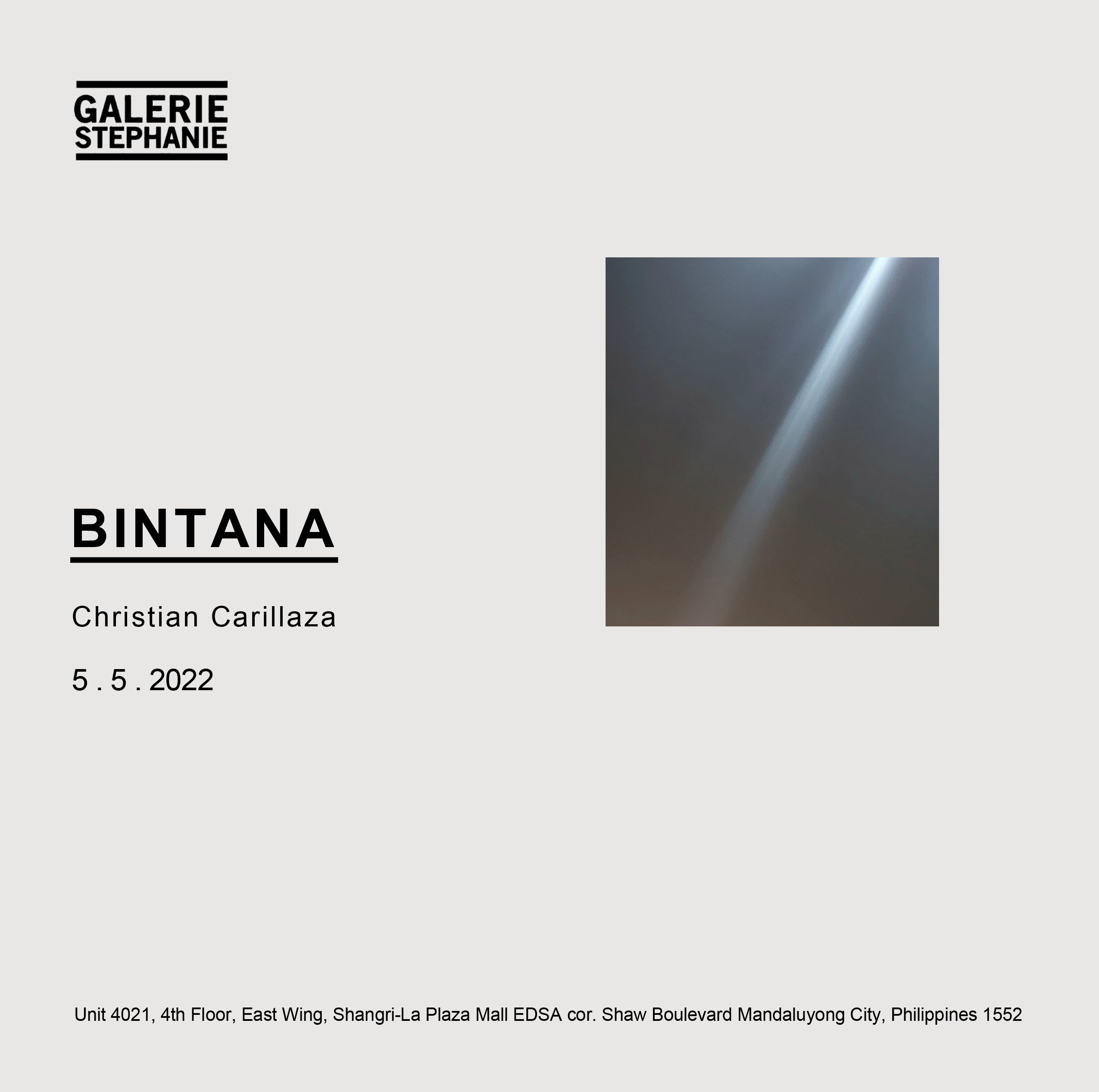 Light streams through the achromatic paintings in Christian Carillaza’s Bintana. Sunlight highlights the creases of a curtain as it crops out of the shadow. A field of flowers behind a grid reaches up toward the source of energy. A figure gazes at the horizon through a rocky canopy, rapt. Light seeps through and under, reflected on the water. Beside it is the unobstructed view of the ocean under backlit clouds. Another engulfs the viewer in thick foliage—the light that cuts through the branches above comes almost as a relief, ever present.

The paintings are paired in diptychs. Each side mirrors the other, like two sides of a wall—the inside and the outside. Inside is shaded from the heat, but it also restricts movement, confines bodies, envelopes the space in shadow. There is a reduction of sight in the darkness. The wall is a barrier in the landscape, an obstruction in the view. The paintings pit freedom against repression, and binding against breaking out.

Carillaza confides that he draws from his own experience of limitations. He mentions his current living situation, musing on the fact that the very physical limitations of the space disallows him from fully delving into his art practice. He’s familiar with the sensation of feeling trapped, both in the physical and intangible sense. His compositions, contemplative, almost barren, still, and bereft of color, echo his longing for something beyond the walls. The audience is placed as though they themselves are looking out into the same landscape, standing in the place of the artist, taking in his view.

But the gloom is set against the sunlight, which trickles in and then breaks through. It makes the waters glitter and leaves grow. The walls open up into the brightness and movement. Remind 1 to 6 are snapshots of nature, glimpses into a serene landscape. This vision of open space is what Carillaza grasps at and hones in his work, zoning in like a telescope, a lens in focus. Nature stands in for the freedom the artist desires, free from the restraints put upon by himself and his situation. Remind—an affirmation of what comes after, a hope for the future.

The last of the diptychs is View Passing Through, which reminds us that we are always moving—nothing is permanent. It contains the darkest of the paintings, a black box with a circle of light at its center, perhaps the mouth of a tunnel or an image of the moon. But it is contrasted against or perhaps complemented by the brightest—an open horizon, flooded with sunlight and full of possibility.

Christian Carillaza’s Bintana weave together stories of confinement and looking forward to breakthroughs.

Looking at each of his pieces, they go through a process of traversing a path, from being closed off to entering an open state. Each of these come in stages, and one sees gradually brighter things along the way. Some of his work represent pitch black imagery, which for him depicts the state of being trapped. He counterbalances this with a subsequent large representation of an open space, denoting light. As the path progresses, his imagery changes to those of which he values, everyday life, nostalgia, and possibilities.

Circumstances led him to feel as if he is unable to maximize his potential. He says that he feels as if he can’t easily make moves, feeling trapped in a position of limitation. His current living situation is one of the more pressing matters as he finds it challenging to create an environment suited for his art practice. Some sort of darkness has been clouding his day to day life.

All these darkness however, opens up a glimmer of hope in which he clings on and looks forward to. Carillaza mentions a vision of an open space, where he is able to realize his desires. Breaking through the hardships and moving forward to a brighter day is what he always focuses on.

Christian Carillaza’s thought process about the exhibition is this: it is a representation and interaction of two dimensional situations, and the process of being trapped (confined); creating a visual space, landscapes and seascapes (signifying open spaces) to be reminded, to breath, to reflect upon, and to look forward beyond the horizon. These embody a perspective of passing through the path.