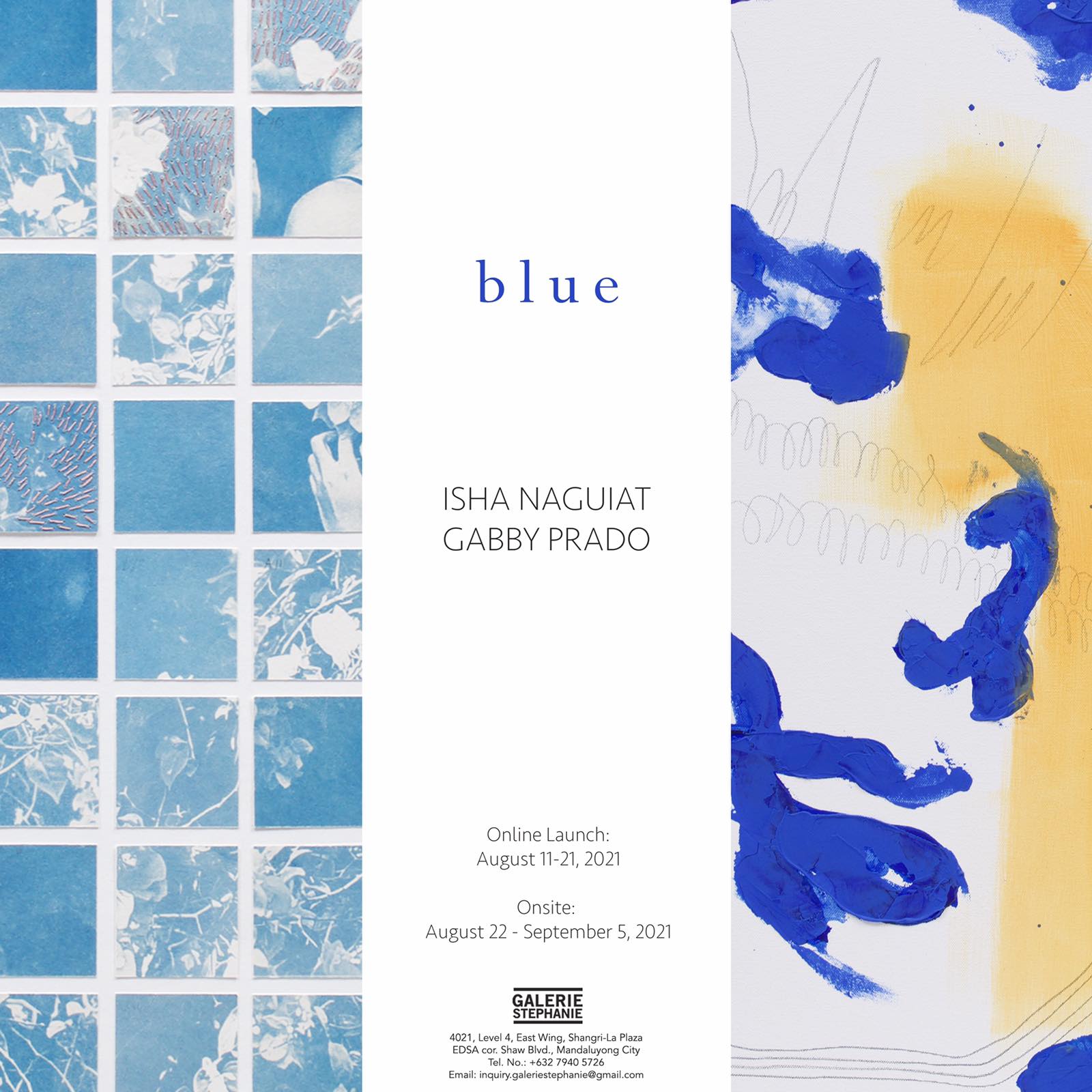 Our fascination with the color blue is an ongoing love story spanning millennia. Cerulean is used to make blue the color of the sky, one of the most luminous is believed to be cobalt, while Prussian blue resembles the dark midnight sky. Mine the caves of Afghanistan and you will find lapis lazuli. Pulverizing lapis into a powdery heap results in the prized pigment called ultramarine blue. Sixty-one years ago the French artist (and performer) Yves Klein patented IKB or ‘International Klein Blue’, a polymer binder and ultramarine formula of his experimentation.

Perhaps there is no other color in the spectrum that bisects so seamlessly throughout the atmospheres of neutrality, tranquility and, serenity and, the sensations of power and rage like blue. We even witness these embodied cycles of rage and calm from the tempestuous skies and seas surrounding our archipelago. Artists Gabby Prado and Isha Naguiat recognize this special quality, choosing IKB as inspiration and intersection for the creative explorations in their two-man show. In this exhibition the artists seize agency and confront dictates and set codes on their terms, seeking to bypass canon and conventions and create work unique to their own lived experiences, understanding and perceptions of the world.

Gabby Prado, as a synesthete, utilizes the unique neurological phenomena she has in her art-making, wherein song, swoosh, thunder, roar, trickle, ripple and, splatter are distilled through hearing and released unto the world into possible daubs and evocative gestures of high color. Before birth, nerves and neurons cross, and that marvel of an intersection in the cerebrum endows upon her a unique ability where, she shares, a slow piano melody in a low key and a lowercase ‘q’ translates to a vividly tangible blue. Light and sound intersect, and her process involves carefully listening to auditory stimuli and capturing the corresponding visualization. In this exhibition, apparitions of yellow light exist on the same plane as quivering vibrations in graphite and impastos of bright blue. Her work is crafted from personal revelations, a diary written not in words, but lines, shapes, and colors.

The dichotomy between the two artists’ work created a peculiar symbiosis, which they chose to explore. Prado relates that both decided to “…try and merge it into one exhibit”. Individual works can momentarily be seen as antipodes of each other, but the end effect of the merge is unexpectedly harmonious. To oscillate between Prado’s part-cognitive, part-intrinsic sound to color abstracts and Naguiat’s contemplative embroidered cyanotypes is to simultaneously recognize how the two artists engage in cultivation from observation, introspection, and sensory astuteness.

Seizing agency and creating work in her terms whilst navigating a world of complex code and canon, Isha Naguiat knows that her process is a design of what she calls, ‘controlled defiance’. Using cyanotype and embroidery as an opportunity to merge both materiality and fantasy, each puncture of needle and pull of silken thread leaves a studied, laborious trail of raised, tactile marks. It is a synthesis of mementos, dreams, and ideals; bringing past into future and future into past. Silken stitches bloom on pieces of cyanotype, where she asserts and establishes her mark by creating emphasis on personal snapshots of space and time. Between each surface intervention of needle and thread are still, quiet minutes turned into hours turned into days, filled in between by an almost meditative recollection. In deconstructing and rearranging fragments, she challenges the established trope of the whole being greater than the sum of its parts and encourages us to behold each little square as its individual self. In culling her memory for art-making, Naguiat is aware that sometimes the human voice can be an unreliable narrator of stories and histories.

Prado reveals that the digital back and forth collaboration between her and Naguiat was—like most of the occurrences in the past eighteen months—something of an oddball experience, preferring to revel in the small but important mundanities of personal interaction, but she understands that these are unprecedented times and correspondence in pixels and bytes has assumed the place of conventional conversation.

For the two young artists, continuing to create work amid a pandemic was solace found in a calm of blue, and perhaps it was a calm of blue appearing like an oasis in a desert, an enduring harbor of solace and survival in a creative life.

“The Sound of Blue and the Force of Stillness”