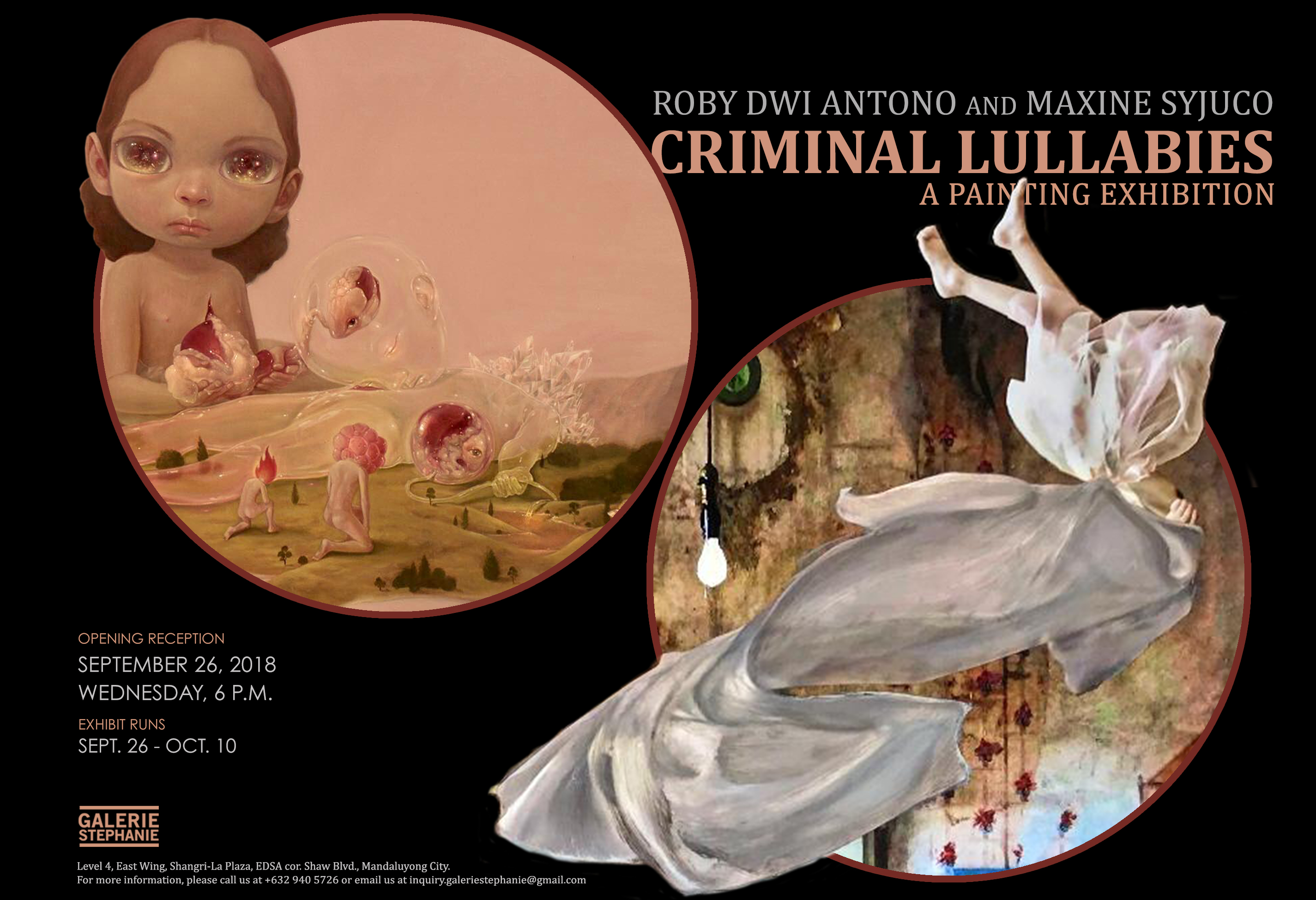 This September 2018, the surreal worlds of two internationally awarded artists collide in the two-man exhibition “Criminal Lullabies” to be held at Galerie Stephanie. Roby Dwi Antono, the Indonesian pop surrealist whose collectors count Japanese contemporary artist Takashi Murakami and American fashion designer Jerry Lorenzo among its ranks, collaborates with Philippine neo-surrealist painter, poet, and performance artist Maxine Syjuco to explore their individual strains of style that find parallelisms in subverting expectations, finding light in darkness, and using children to depict truths of the world. “Criminal Lullabies” will have its Opening Reception on the 26th of September 2018 at six o’clock in the evening at Galerie Stephanie, 4/F Shangri-La Plaza, Mandaluyong.

The exhibition title, “Criminal Lullabies” calls attention to the dichotomies along which Roby and Maxine swing to and fro; Roby with his portraits of deceptively naïve children, and Maxine with her quest for the immortal soul in the gleaming interstice between emptiness and love. Largely set against a flat backdrop of flushed, dusty pinks and siennas, Roby Dwi Antono’s new series of works confronts the viewer with an unapologetic singularity of subject. Child-creatures armed with Godzilla, a crawfish claw, a toothy liver, take up the entirety of the picture plane, leaving little comfort from the girls’ bizarre, grotesque, yet strangely beautiful baggage. The large painting ‘Kinasih’ (literally, ‘beloved’) is a highlight amongst Roby’s works, a blushing tableau overseen by a giant child-being transplanting its viscera into a translucent man-of-worship. As the only work in the series to establish a sense of scale, the world of ‘Kinasih’ translates unto the rest of Roby’s portraits, lending his iconography an almost religious gravitas. The microcosms Roby projects upon his canvases reflect the complex and playful lives ordinary objects lead in his head, as he merges popular significations with private reimaginings.

Maxine’s mixed media artworks on the other hand, fits vast emotional space into the intimacy of a stately living room, bedroom, hallway, and study. In composing the work, she layers together collages of photographs taken on her travels, of her niece as a child, and objects that strike an emotional chord. The series, aptly titled, ‘The Drowning Room’ alludes to the history of hurricanes in the Philippines which, until 2001, were only given female names. The flood waters symbolize a woman’s tumultuous emotions as they threaten to encompass and overtake the self. In the midst of the dreamlike deluge, Maxine inserts the faceless silhouette of a young girl, suspended from the torrent by a billowing white veil, or a lofty wing. For Maxine, “why we choose to love comes from an emptiness. In order to find light, you have to explore the dark.” Adversity is necessary in order to free the human soul; escaping from the depths further reveals truths that lie beneath the surface. The minute addition of the folder paper boat, intact in spite of the stormy seas, speaks of the strong yet quiet tenacity in the heart of each person.

The daughter of avant-garde artists Cesare and Jean Marie Syjuco, Maxine is an Internationally awarded artist known for her poetry, photography, performance, and installation art. In 2017 Maxine was awarded the Magnum Editor’s Choice Award for photography, and in 2016 her album design for her art-rock band Jack of None bagged them the Independent Music Awards win for Best Album Art. Maxine’s exhibits have taken place locally and internationally, in prestigious institutions such as the Cultural Center of the Philippines, the Metropolitan Museum of Manila, the Tokiwa Museum of Japan, and the Art Takes Miami Exhibition in the US.

The two-man exhibition by Roby Dwi Antono and Maxine Syjuco, “Criminal Lullabies” will hold its Opening Reception on the 26th of September at 6 o’clock in the evening at Galerie Stephanie, located on the 4th Floor of Shangri-La Plaza, East Wing, Mandaluyong City. The exhibit will be open for all to view until October 10, 2018. For inquiries, call (02) 940-5726 or email inquiry.galeriestephanie@gmail.com. 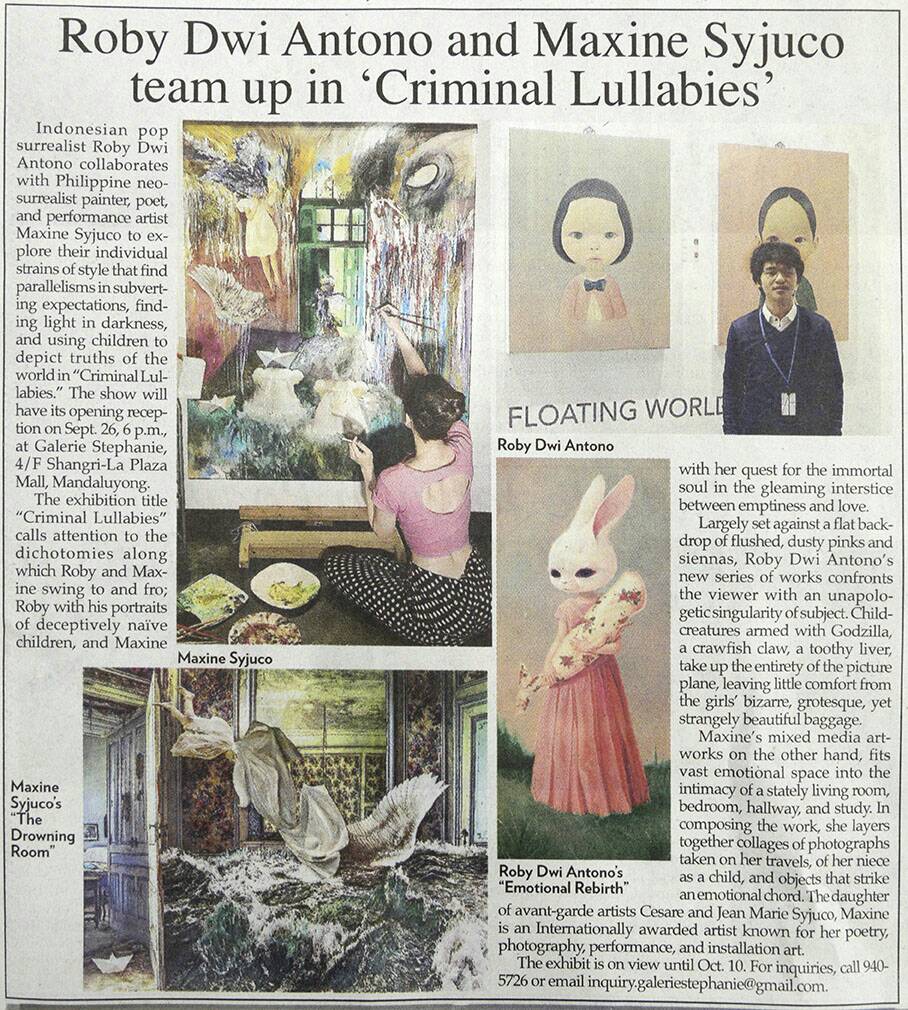 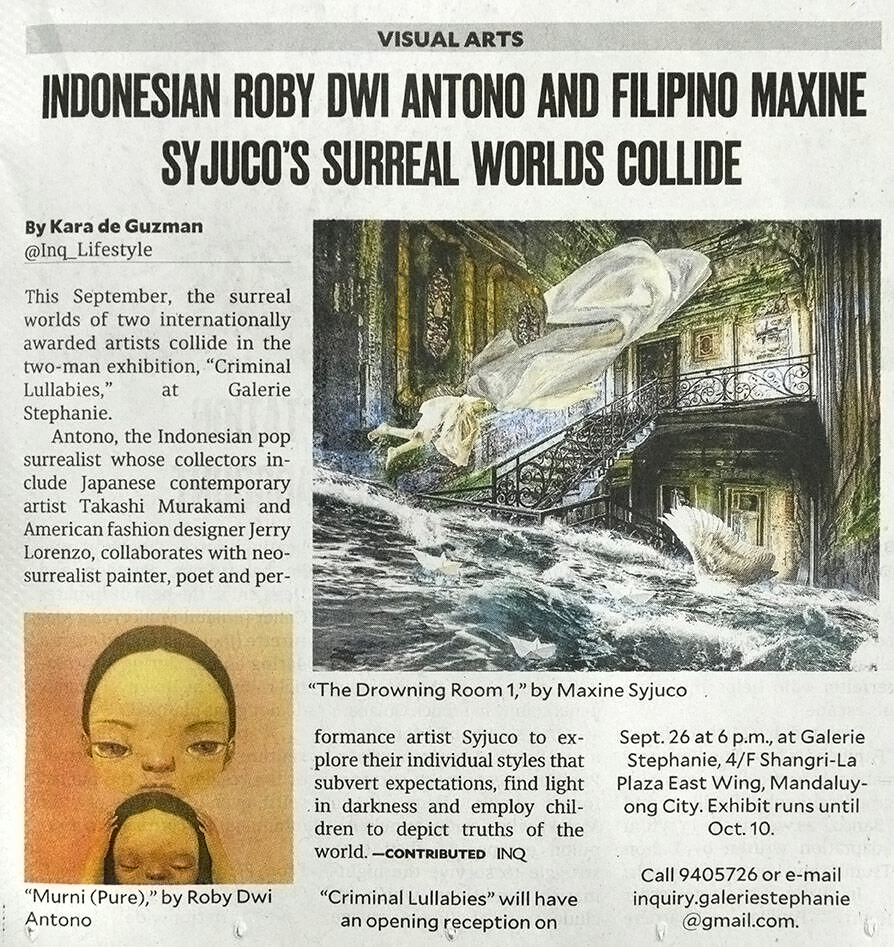 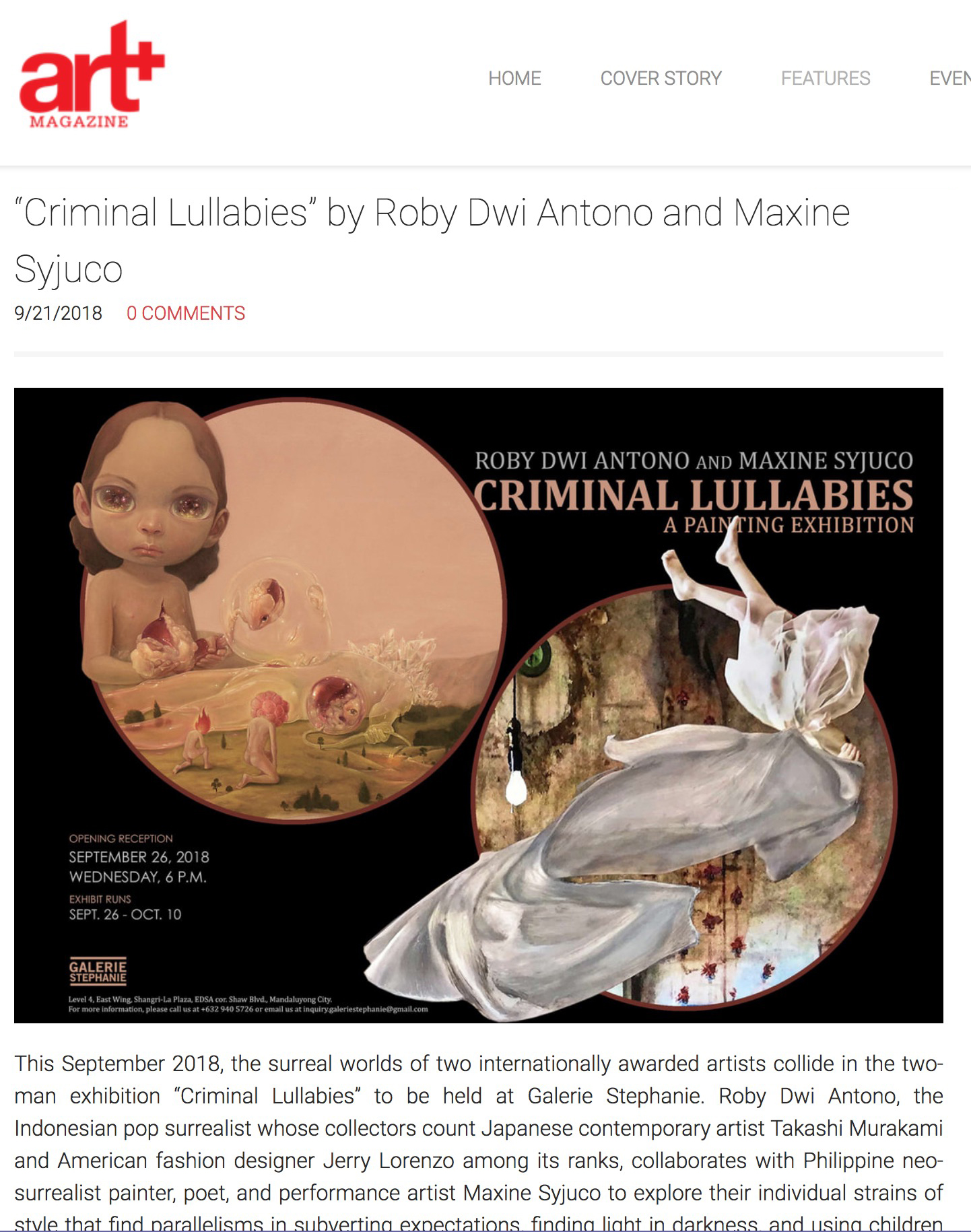 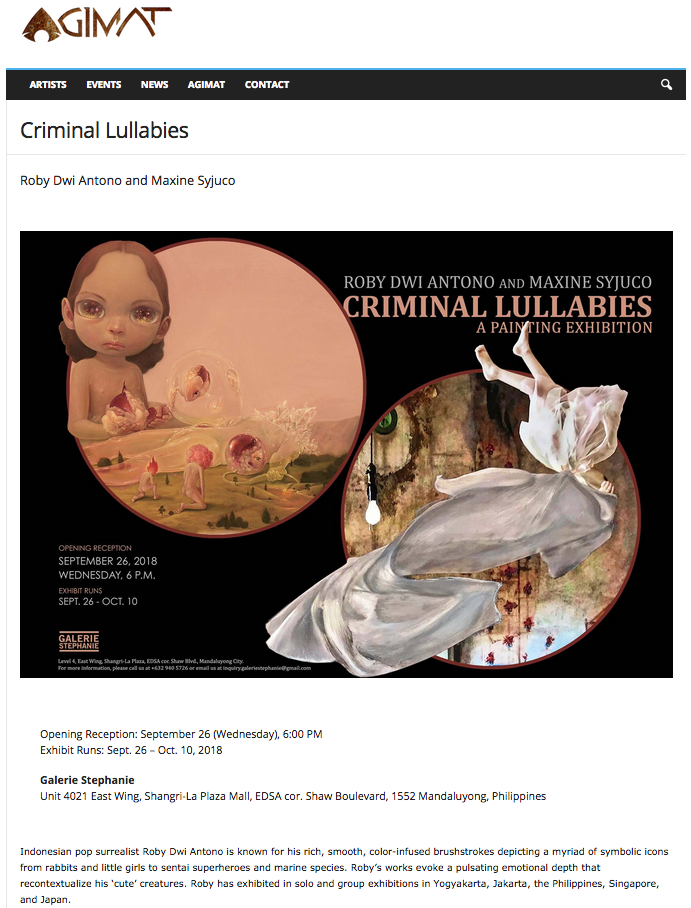