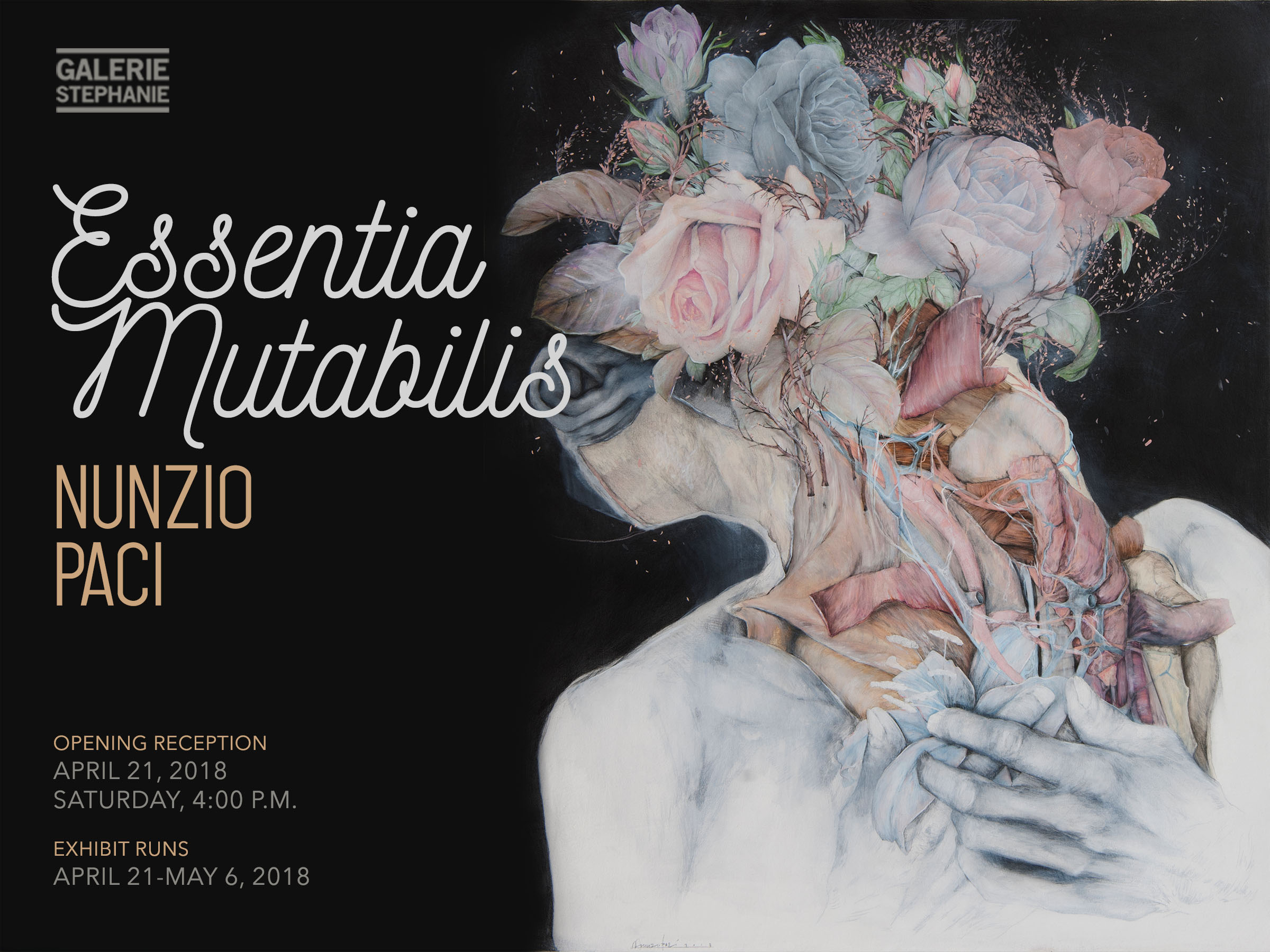 Essentia Mutabilis: On Memories and Existence
By Grace Micah Oreiro

In Umberto Eco’s novel The Mysterious Flame of Queen Loana, the protagonist Yambo is an antiquarian who also shows immense fondness of quotations about fog. Interestingly enough, this character also suffers the loss of his episodic memory (autobiographical events), but can remember all the books he has read. The motif of the fog manifests itself as an existential paradox—existing only in its impermanence. Empowered by the novel’s nostalgic assemblage, it relatively highlights the principle of one’s being and of what defines it.

Returning to the Philippines for his second solo exhibition, Italian visual artist and anatomist Nunzio Paci welcomes back his audience with a more existential and personal vision. In his new series entitled “Essentia Mutabilis” (Latin for “Unstable Essence”), he opens a realm of his being, the thought process and the mental environment of himself as an artist as the pieces are being made. He grasps the idea of the fog, mist and rain as impermanent entities (or “unstable essences”) that forge questions on whether existence is bound by memories.

Likewise in his works, the subjects are suspended in an atmosphere of uncertainty, encapsulating fear in nonexistence, thus seemingly feeling the need to physically touch themselves to assure that they are. One that particularly embodies this thirst is his acrylic-graphite artwork entitled “Like The Rain That Deceives and Lacerates Flesh” where the subject’s fingers interweave through the strings of exposed chest muscles and veins, with earth colored flora rooted within it. Majority of his subject also give the impression of being reeled away into nothingness—complimented by grotesquely back-bent and twisted postures in highly accurate anatomical renderings.

Although his distinguishable style of flesh, flora and fauna are still prevalent, Paci presents a technical experiment, albeit tedious, of rendering the background in ground graphite, hence giving it a more raw and “impermanent” sense. This new style is present in his works like “When The Darkness is No Longer Frightening” and “Your Voice, Between Nerves and Thorns.” Paci continues to immerse his viewers into the idea of the flesh as a complex entity sprouting with elements of his philosophical and emotional musings. His recent works, a constant creative progression of both style and technique, further highlights his skill in painting immensely detailed portrayals of the human, animal and floral anatomies.

Fresh from his second participation in Art Fair Philippines, Nunzio Paci mounts “Essentia Mutabilis” with more curatorial vision and vigor. Since his last solo show “Mimesis”, which was also exhibited in Galerie Stephanie last year, he has been part of various group shows in Copenhagen (Denmark), San Francisco (USA), London (UK), New York (USA), and in his home country in Italy. Born in Bologna, Italy (1977), Paci has been active in the art scene for more than a decade. He continuously receives various residencies from all over the world, with his recent ones here in the Philippines and in Norway; as well as an upcoming one in Hong Kong. His works has also been featured in prominent art publications like WideWalls and Hi-Fructose, as well as an art-anatomy book entitled “Anatomy Rocks” alongside Mark Ryden and Damien Hirst.

“Essentia Mutabilis” will be on view from April 21 to May 6, 2018 at Galerie Stephanie in the 4th Level, East Wing, Shangri-la Plaza. The opening reception on the 21st will start at 6PM. For inquiries, please email inquiry.galeriestephanie@gmail.com, or call (02) 940-5726.