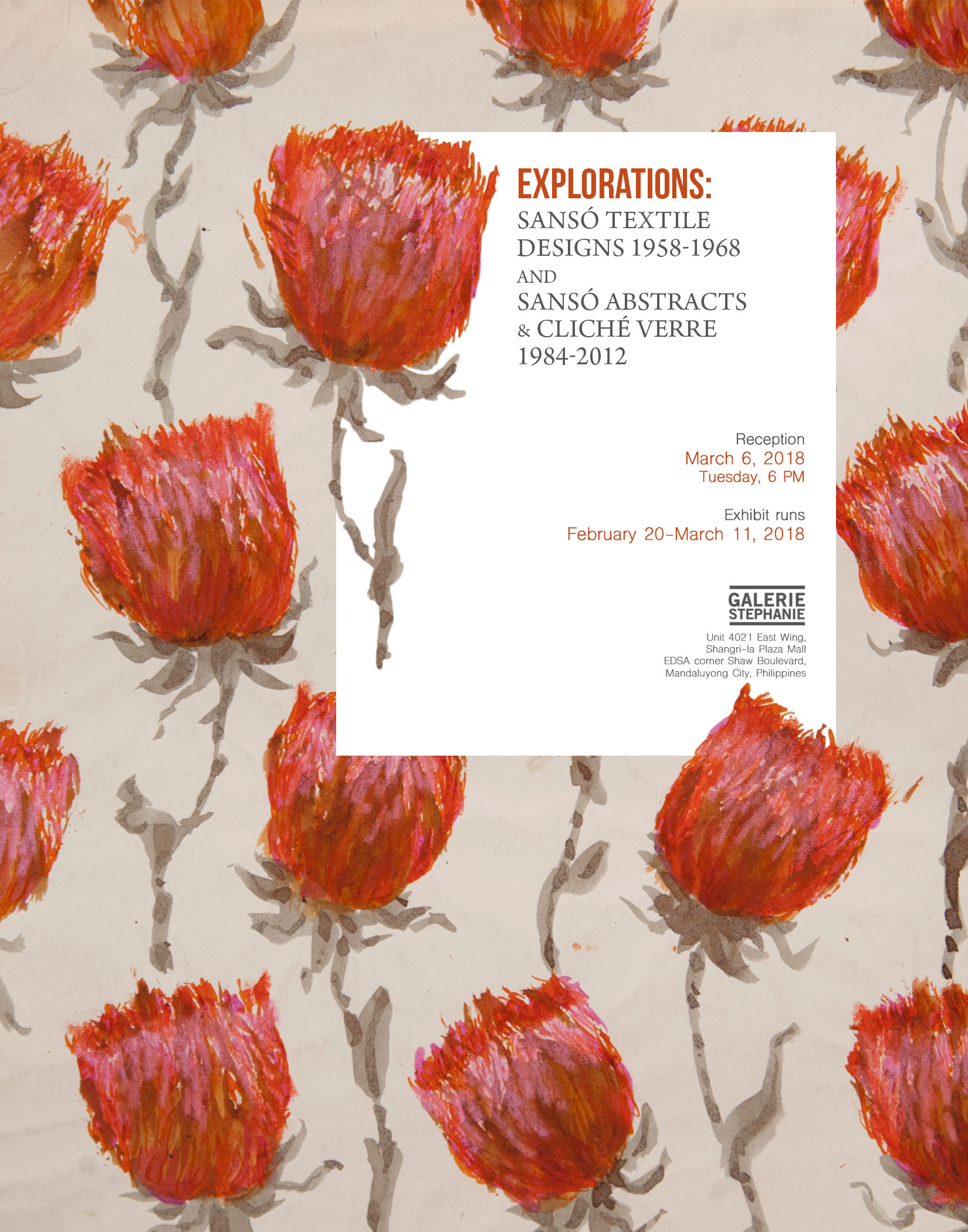 Aside from the renowned expressionist representational works of mystic landscapes and fantastic flora, the abstract works of Juvenal Sansó is another aspect of this illustrious modernist master’s career. Considered to be one of the pillars of Philippine Modernism, Sansó’s keen appreciation and understanding of the modernist direction of art allowed him to develop his own style of abstraction using the techniques of stamping, watercolor washes, and inks blots and subsequently developing these using his unique acrylic color palette.

Sansó’s journey as an abstractionist started after he won the grand prize successively for the oil as well as the watercolor categories competition in the most prestigious art competition in the Philippines, the Art Association of the Philippines. Sansó then moved to Paris to study and work as an artist. To augment his income, he began working on textile designs. The painter’s themes acknowledged the several families of patterns among textile designers: florals, geometrics, conversational, even pop art, and ethnic. His textiles formed the core of his creative opus that typified the forward-looking post-war era look.

Companies like Bianchini Ferrier, an Italian based firm, and Synergie, a Swiss company, became his patrons. His most significant success in the field was when he was commissioned to do an entire collection for the House of Balenciaga, the biggest name in the business in the 1960s, who printed his designs in silk for an entire line of scarves, textiles and numerous other products.

Galerie Stephanie will be presenting some of the exceptional paintings in his collection of textile designs which he made from 1958 to 1968, and will be the main feature in the exhibit “Explorations: Textile Designs (1958-1968), Cliché Verre and Absract Paintings”

After completing designs and artworks for the Balenciaga collection in the late 1960s, Sansó moved on to designing sets and costumes for six operas in France and two in the Philippines. After 1968, Sansó worked with one of opera’s most acclaimed personalities — the Italian American composer and librettist Gian Carlo Menotti. His success also gained him the admiration and support of the iconic fashion designer and art collector Elsa Schiaparelli.

In the 1980s, his next sojourn in abstract art was his multi-media painted colored slides, which he presented and exhibited in Paris and titled Cliché Verre. He completed a distinct number of these artworks, several of which will be exhibited in “Explorations.”

Finally, Sansó’s journey into abstraction when he started planning to come home permanently to Manila after a 50-year stay in Paris started in 2005. He revisited his cliché verre and did interpretations of them on canvas, several of which will be showcased in “Explorations”

Sansó’s works resulted to beautiful translucent, jewel toned palette of works, and boundless areas of vivid color which included geometry, inventive color contrasts and graphic, repetitive patters – perfect for today’s decorative schemes. The texture applications gave an extra visual interest and density to what might otherwise be a simple design.

The opening reception of “Explorations: Textile Designs (1958-1968), Cliché Verre and Absract Paintings” is on March 6, Tuesday at 6:30PM. The exhibit will run from February 20 to March 11, 2018 at the new location of Galerie Stephanie, 4th Level of the East Wing in Shangri-la Plaza Mall, Mandaluyong City. For more information, you may contact the gallery at inquiry.galeriestephanie@gmail.com. 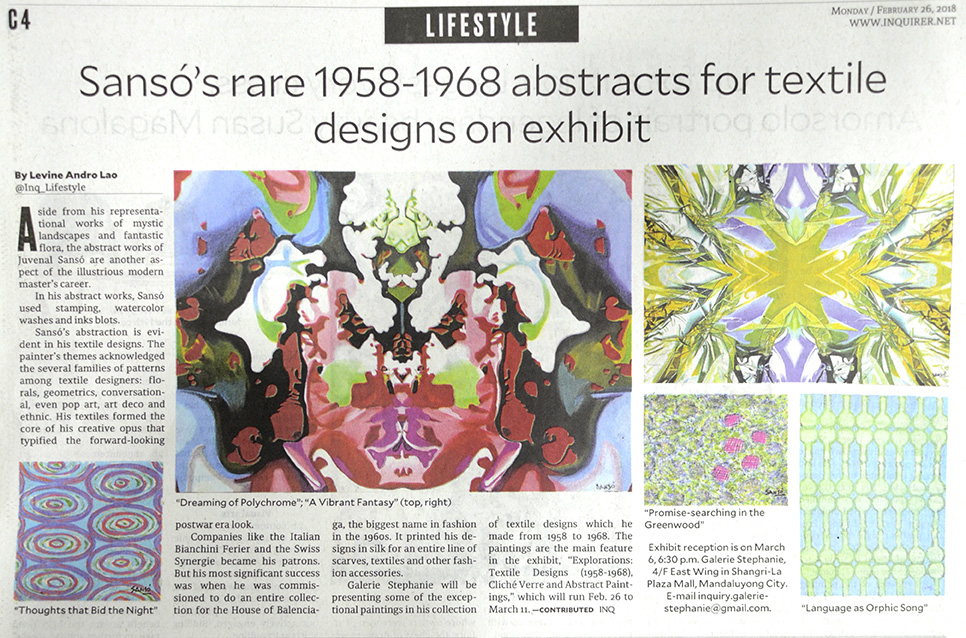 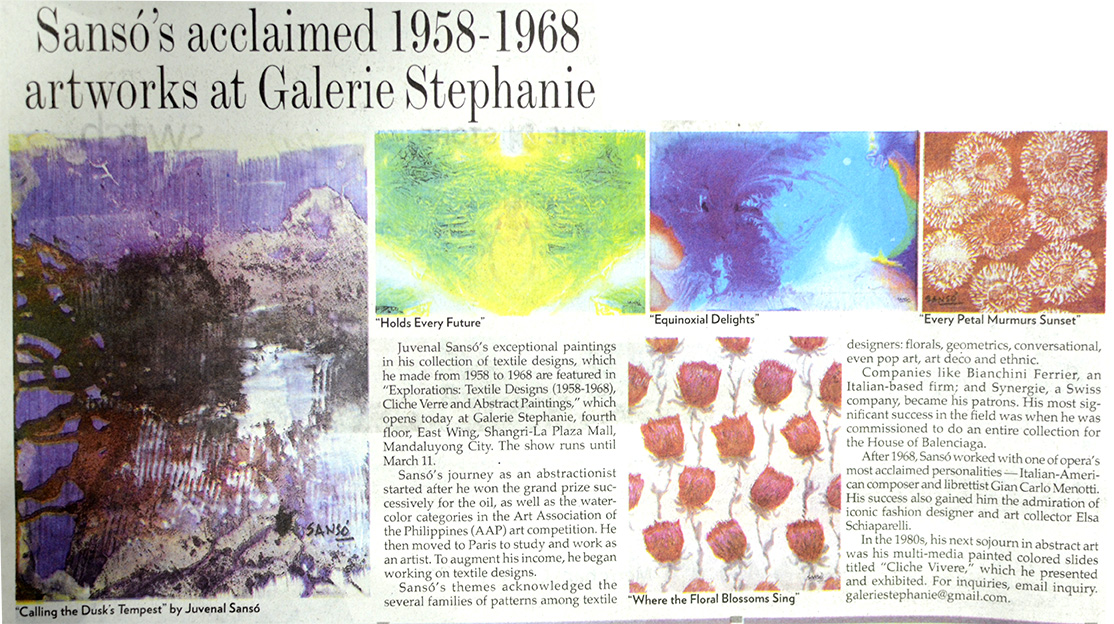