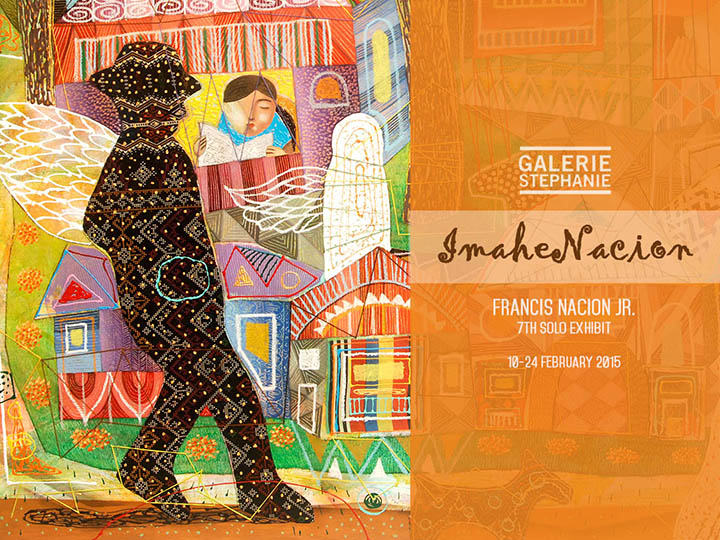 To truly look at a painting by Francis Nacion Jr. is to read it like a medieval cathedral. Both are coded with symbols that point to the order in creation, which the Greeks have called the cosmos, that is not just about the wonderful patterns that make life possible but to the necessary moral systems that necessarily govern beings with free will; and by extension of this logic, the necessary faith in the triumph of good in the end. What is beautiful, is good; and what is good, is beautiful. And both, the painting and cathedral, speak about the present, and a promised future – a revelation. Nacion, who developed his early visual language from genre painting, has been known to express idylls of good, abundance and beauty through the familiar idioms of the traditional – mother and child, women with baskets of fruit or flowers, children at play, and the harana – painted in brilliant blues, pinks, greens and magentas, and detailed in exquisite scraffiti, delicate scratchings on wet oil paint, that create the textured look of the ornate embroidery that adorns our barong tagalog and other indigenous ceremonial textiles whose patterns he is fond of. Appealing to our Filipino aesthetic- in the sense that what is good is necessarily beautiful, and dutifully labored over – he has gained wide acceptance and a loyal following.

Known for his depiction of people with only half of their faces revealed, a metaphor for what people choose to reveal and, conversely, to hide in the daily presentation of ourselves to others; he has widened his schema to include representations of the unfamiliar, or more precisely, the unseen.

Starting in 2012, with his third solo exhibit Beguiled, Nacion has ventured into the world of the spirits and beings we do not see but have intimately known through folklore. He then proceeded in both Celebrating Life and Genesis, his fourth and fifth solo exhibits respectively, to explore and populate this world with hybrids – people turning to animals, and chimerical animals so fantastic – to represent how, in this worldview, everything is not as it appears to be, but rather, truly and magnificently mysterious, constantly changing, metamorphosing, and therefore, can never be fully known.

It is consistent then, that for his seventh solo exhibit, ImaheNacion, the artist proceeds in this vein of coded revelation, breaking the image or imahe by using a complex layered perspective, exposing discrete worlds superimposed upon each other, and actually breaking through the image plane, through the use of wire, string, shaped textiles and glues. All the works appear very free; unconstrained by a belabored composition, and rather organic, as if the works were created from pure stream of consciousness, the products of his wild imagination. For theme and technique, these new works indicate a clear breakthrough for his art practice.

The first group of works emphasize change through transformation and metamorphosis. The other, reveals the overlayed worlds and the coexistence of the matter and spirit. Both point to the notion of not fully trusting what one appears to see, and both integral to the concept of an “end time” where all shall be accountable for their actions.

The first group in ImaheNacion is composed of female figures. One subgroup is characterized by the peculiarity of their dress, ornamented with wire breaking through the canvas, becoming nearly three dimensional like a bas relief such as Nature’s Bloom and Birthstone. The other group depicts women in the act of transformation from one form to the next. Notable in this group are Imaginary Queen, Third Eye, and White Cat. They point to the mystical, where spirit connects to the physical, in ways that are wonderful and strange.

The second group in the exhibit is exemplified by the series of carousel works and in the singular Angels Around Us. These works show also breakaway from style of Nacion, which has so far been notably simple and flat in their composition, like ancient Egyptian wall drawings. These new works retain this approach but differs in the the method of overlaying different images done in different media- paint, string, textile and colored glue – creating an x-ray like view, revealing what is otherwise naturally hidden, and exposing the superimposed worlds that comprise Nacion’s complex cosmology.

Most of the works in the exhibit integrate textile and string; materials associated with craft, into his art. But, as we already know, things are not simple in the symbolic art of Nacion. As with his ideas of creation, the use of material is also a code – thread and cloth are associated with the femine, a vital clue: a tribute to the artist’s mother who loved to sew. By using these materials, a symbolic connnection is made between him and her, bridging the physical with the spiritual, a poetic expression of remembrance; of love made tactile in each of the works.

Like many artists whose works of fiction are often revealing of the artist’s personhood, each work here crystalizes vital aspects of Nacion. Childlike joy that revels in the carousel, that love of a son that dutifully remembers, and a healthy respect for the unknown – of which, one can say, we all are, as embodied spirits living in a wonderful and mysterious world. Through this exhibit, we get to know not just the imagination of this artist, but each work is wrought in his image, imahe ni Nacion. Ultimately, what is revealed, we realize, are not just glimpses of hidden worlds, but of the heart of the artist himself.