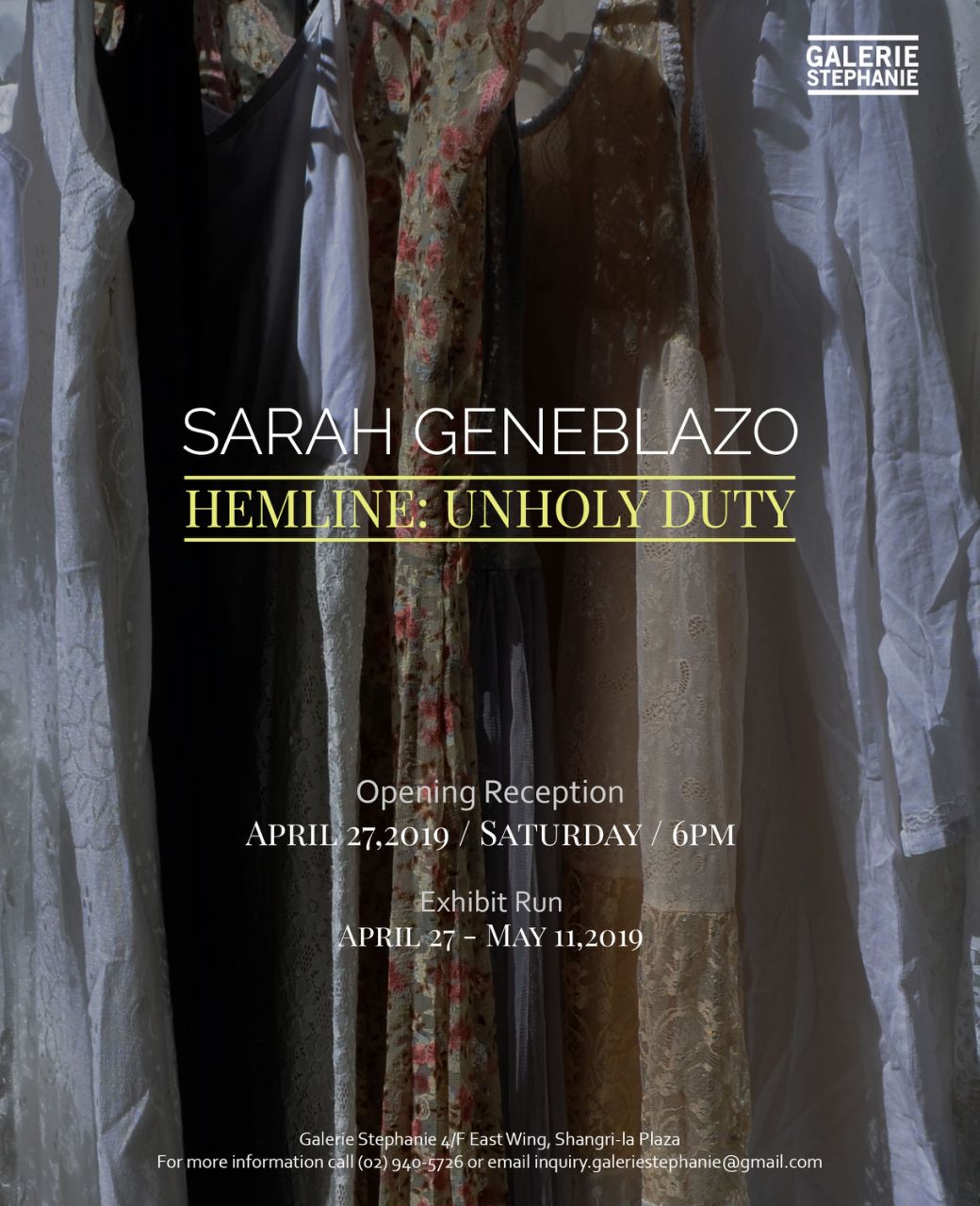 The Spaniards were horrified by the revolting liberty and too high social status of the woman, mujer indigena. The Conquistadors and the friars quickly changed this; education was given only to upper class girls, who were trained to become beautiful, submissive, capable to stitch embroidery, and suitable to marriage.[1]

The evolution of Sarah Geneblazo’s body of work tracks her journey through artistic therapeutic healing, her paintings serving as outlet for childhood sexual trauma. Since her first solo exhibition “Escape” at West Gallery in 2012, Sarah has been depicting pensive scenes of women – often using herself as model – free falling in dark hallways, in repose amidst nature, lost in vast greenery, or physically absent yet implied. Her canvases are austere and burdensome, carrying as if a cathartic breath suspended through frozen time.

In her ninth solo exhibition, “Hemline: Unholy Duty,” Sarah challenges the socio-cultural pressures that dictate a woman’s behavior, goals, future, and self-worth. She depicts female figures solitary and burdened, as if weighed down heavily by their delicate sheer garments as well as by the yoke of the viewer’s gaze. One of the exhibit’s central pieces, ‘Sacrosanct Mania’ features a woman robed in a massive white wedding gown – designed by her uncle Yto Gonzaga – whose immense folds and embellishments swallow the figure entirely. In the ten piece series ‘Anatomy of Melancholy,’ Sarah pairs an oil painting of a seated woman with a resin-encased piece of clothing. The imagery is delicate and powerful, poignant and intense; the bird’s eye perspective implicating the audience within the predominant ideologies that shackle a woman’s self-worth to her domestic ‘duty.’

As a woman just entering her 30’s, Sarah keenly feels the pressure to settle down, get married, and have a family, despite her wishes to do otherwise. Gone are the days of the cult of domesticity, when womanhood was defined by the fulfillment of domestic roles and the possession of the virtues of piety, purity, domesticity, and submissiveness. For Sarah, womanhood isn’t and shouldn’t be anything but freedom – freedom to choose, to find happiness, to heal, to change, and be the change.