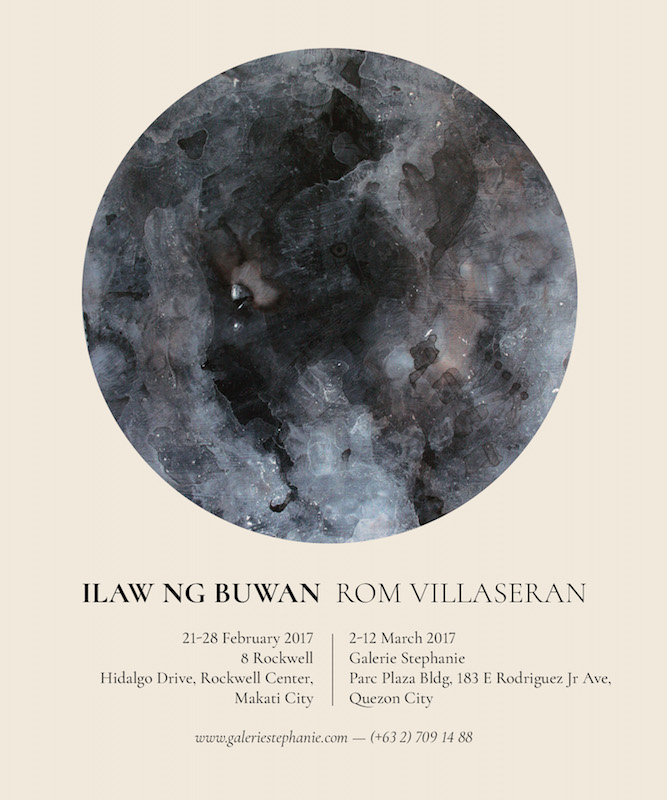 Visual artist and world-weaver Rom Villaseran has known since he was a child that he was destined to live inside his imagined landscapes. The outside world was an uninteresting, hostile, and barren place where he didn’t fit in; the vast fantastical realms in his head held far more sway than real people and places could. The likes of Tolkien, Gaiman, and M. John Harrison tagged along his adolescent world-building. As he grew older, Rom began to realize that creatures grounded in reality and natural science – connected as they are to humanity in a circle of life – could inspire the same sense of mystical wonder as science fiction literature did. Rom now translates this wonder into equally-stunning masterpieces that begin as watered-down acrylic swept randomly across a horizontally-flat canvas. After the water evaporates and leaves behind patterns of pigment, Rom digs into his vast trove of creative vision, seeing past the liquid bleed marks to pareidolic images lurking beneath. Various life forms materialize through Rom’s deft hand – octopuses, dragonflies, flying squirrel-human hybrids, landscapes, even fields of flowers – all elements meticulously painted and drawn in a way that allows them to communicate with each other and to populate the canvas naturally. Rom hides details in plain sight – minuscule, sometimes just barely visible as it hides under other patterns, or visible only when one turns the painting upside down – in an bid to share the delight of discovery with his audience, .

This immensely technical and challengingly creative practice has turned Rom Villaseran into one of the art world’s best-kept secrets. His canvas and paper works are enthusiastically coveted by even the most discerning of contemporary collectors in the Philippines and abroad. After joining the roster of modern and contemporary art gallery Galerie Stephanie in 2012, Rom has held one exhibition after another, beginning with a solo exhibition in 2014 entitled Orchestra. After which he traveled to Singapore for Art Stage Singapore, to Japan for Art Fair Tokyo, and Indonesia for Bazaar Art Jakarta, all in the same hectic year of 2015. The well-established Japanese gallery Kashima Arts took notice of Rom’s Art Fair Tokyo showing and hosted his first solo exhibition abroad, an impressive tour de force entitled Hardin sa Lawa (Garden in the Pond). This frenetic string of shows finally slowed down in early 2016 as Rom returned to home base for Art Fair Philippines, where the budding artist was greeted rapturously by his faithful clients.

This was Rom Villaseran’s life as viewed from the crowd. He was an artist bursting with creativity, with lines of enthusiasts clamoring for his work, and audiences local and international singing his praises. But behind the scenes was a different story. The non-stop workload was taking a heavy toll on Rom and his home life, which he shared with his wife and partner Kara de Dios. “My [mood] swings were really going crazy at home,” he attests in an interview with this author. After finishing the paintings “Nursery” and “Oytser,” both large dramatic pieces done in Rom’s signature style, Rom decided he had to change things before irreparable damage was made. He began by painting a five by four foot portrait of something that meant a lot to him – his wife Kara. Entitled “Sibol” (Germination), the striking black and white piece punctuated by bright yellow bumblebees and a single flower was to become the catalyst for the whole series of his new exhibition Ilaw ng Buwan (Light of the Moon).

After Sibol, Kara convinced him to go to therapy. “It was becoming more and more difficult for her to live with me. Because we’re partners, we see each other every day, her studio’s down stairs. I was getting too heavy for her.” Rom’s psychiatrist diagnosed him with bipolar disorder. Though it was difficult to accept, suddenly it made everything click into place – the wild mood swings, his difficulty in socializing, and the unwillingness to leave the house. The realizations stretched back until early childhood; Rom finally knew why he could never seem to fit in. But the struggle wasn’t resolved with the realization. “At that point I realized I really felt like a monster chasing Kara,” he says, describing the emotion behind the next painting in the series, a monochromatic four by four foot piece that alludes to Rom and Kara’s relationship told through the mythical story of Apollo chasing Daphne. A spectacular painting filled with honest emotion entitled Lilim.

Once he started painting about himself, Rom found he couldn’t stop. ”Kailangan ko eh. [I needed it.] There was no way I could produce paintings like Oyster or Nursery. It had to be this. It had to be taken out of my system.” Rom moved on from talking about Kara to talking about the dual personalities that existed within him. One was the original Rom – extremely creative, very honest, fiery to a fault, and generally uncaring of the world outside; the second was the created Rom – a mask to wear around normal people that allowed him to interact with human beings properly. The former was the beating heart of Rom as an artist, but the latter was his connection to the outside world, a necessary element for him to survive. However at some point the violence of his swings from manic to depressive shifted the balance; Rom’s mask became so strong that it threatened the real him, denigrating the creative to house guest status. Rom’s desire to honestly express this mental state in order to cope with his illness resulted in a rare series of self-portraits, “Both of Me” and “I Am”. Both of Me is a marvel of a work, especially when situated within Rom’s usual oeuvre. Large yet simple, expressionist in stroke, and possessing no hidden details – it could almost be called an anomaly. It succinctly and honestly expresses the two characters populating the same being that is Rom Villaseran.

The knowledge was painful yet illuminating. “That’s what [the painting] I Am is all about. At the moment I made that piece, it was like me embracing who I was.” This other self-portrait, a five by five foot painting, depicts a large figure emerging from shadow, the faint light illuminating only his gaunt limbs and massive ram-like horns. Beneath it is an upside-down wintry landscape, barren save for silhouettes of trees and houses and a large dead tree in the center. At the painting’s very top is a hint of shimmering gold, with a slight blue haze mirroring it directly opposite, representing a brightly illuminated daytime. This is Rom embracing his Hades archetype personality and accepting its consequences.

Rom and Kara share with me a quote from the late actress Carrie Fisher, who was also diagnosed with bipolar disorder: “One mood is the meal, and the next mood is the check,” she said in her 2008 memoir Wishful Drinking. Rom says it’s a painfully accurate description of the disease he and Carrie share. “I Am” was Rom’s last self-portrait. His next pieces were much smaller, still snapshots of his mental state but less introspective – “Pusang Itim” [Black Cat] shows how Rom thinks his cats must see him as; “Halikan” (Kissing) is about how he enjoys being a couple with Kara, even until death. His “Sampung Anak ng Gabi” (Ten Children of the Night) series is an elaboration on fictional characters that exist in and are inspired by the nighttime, the time which Rom believes to be the most magical part of the day.

“This is probably the one time I’m going to do this. It’s too taxing for me,” Rom confesses. Indeed, Ilaw ng Buwan could be taxing even for a viewer. To look past its aesthetic façade is to look unabashedly into the depths of a person’s lowest point. It is not all beautiful, yet it is not all painful either. Rom skillfully and precariously balances on the edge of a knife in order to present a breathtaking outpouring of human experience. To view the entire series is like stepping inside an emotional echo chamber, each artwork a facet of humanity bouncing and reverberating with immense relatability until it becomes painfully loud. Rom Villaseran is right to favor the magic of the nighttime, the craft of his mind’s eye allowing him to illuminate the darkest depths of the human heart. Ilaw ng Buwan is immensely personal, yet it is also a story about all of us. Rom might be one of few with “wiring in [his] brain that’s not right,” but he is not alone in being human.

Ilaw ng Buwan opens on February 21, 2017 at the pop up gallery space of Galerie Stephanie, located on the Ground Floor of 8 Rockwell Building, Rockwell Center, Makati City. It will be on view there until February 28, after which it will be moved to Galerie Stephanie at Unit 1B Parc Plaza Building, 183 E. Rodriguez Jr. Ave., Libis, Quezon City from March 2 to 12, 2017. For inquiries, call Galerie Stephanie at (02) 709 1488 or send us an email at inquiry.galeriestephanie@gmail.com. 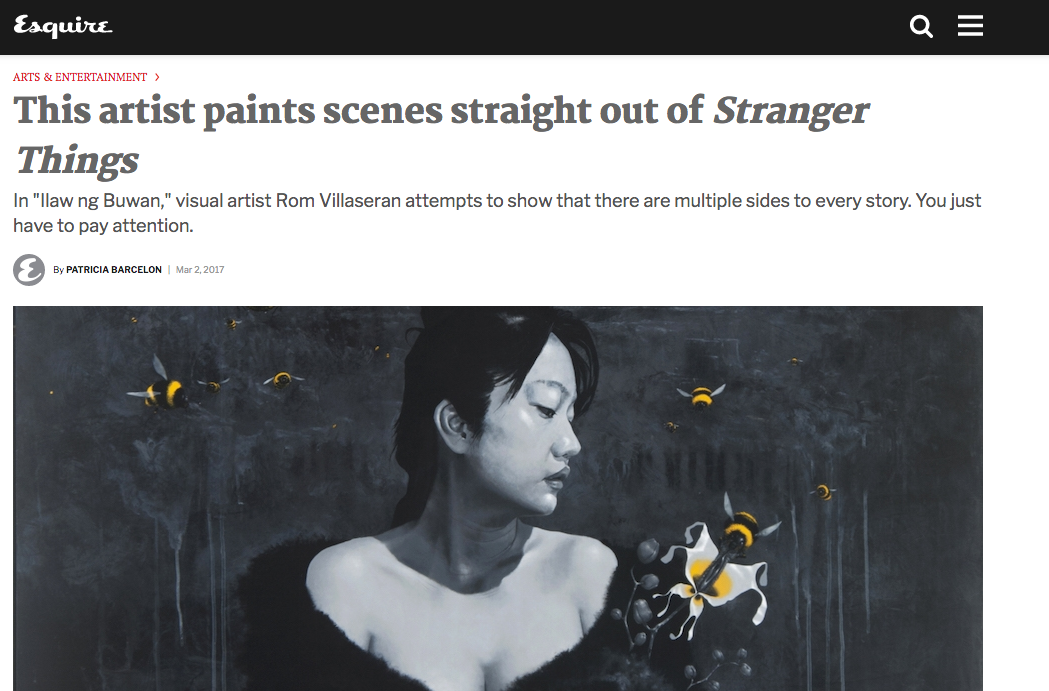 (“Rom Villaseran: Finding the beauty in madness” by Alex Pastor) 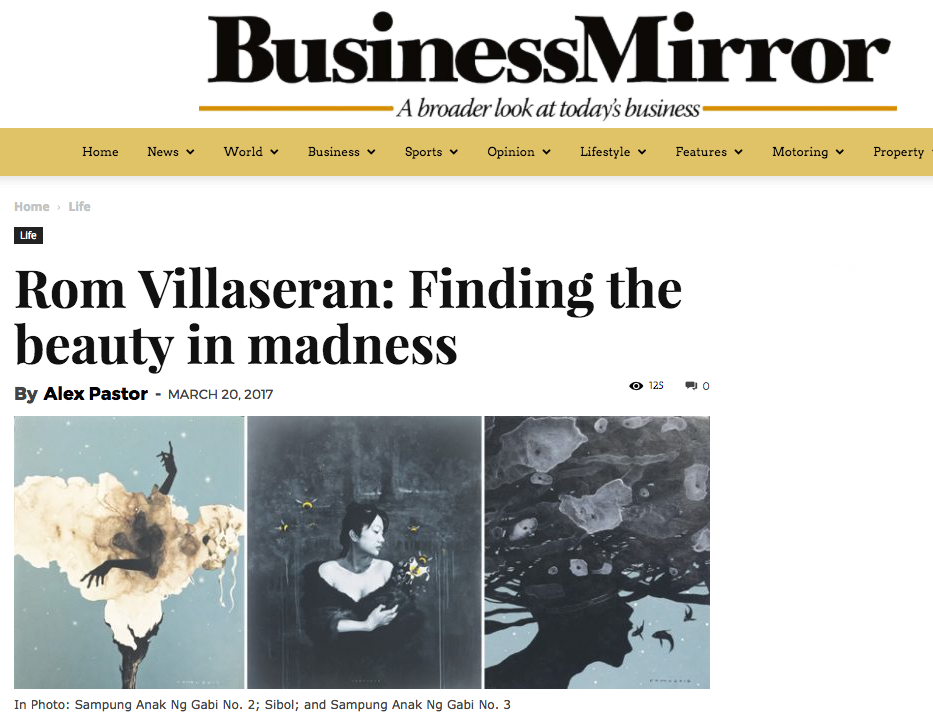 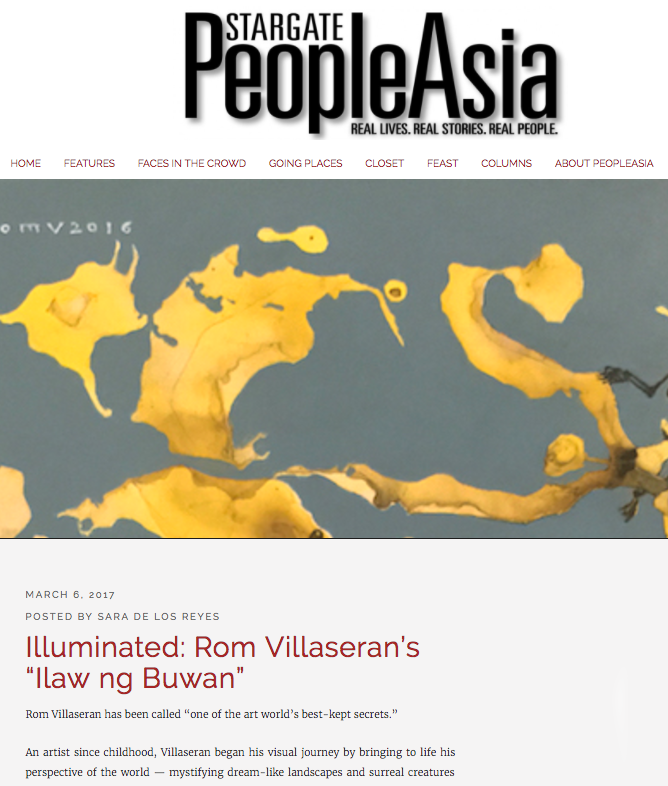 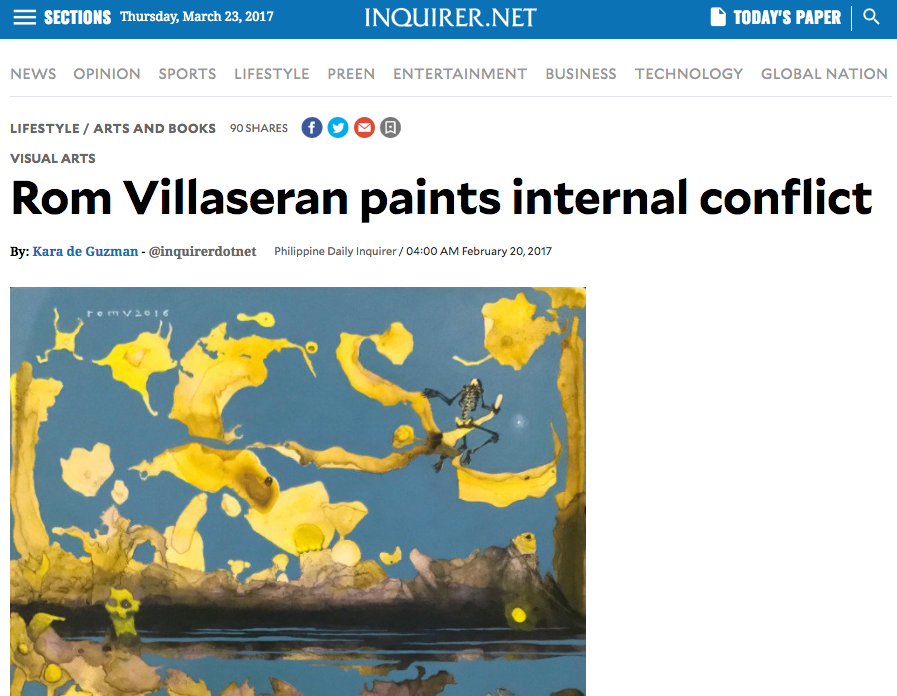 (10 Art Exhibits to See This March by Christa I. De La Cruz) 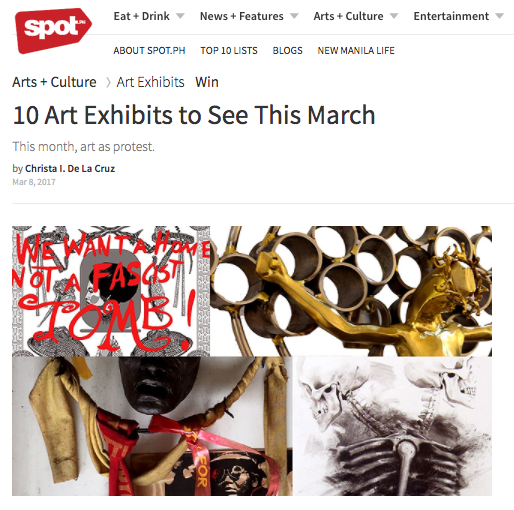