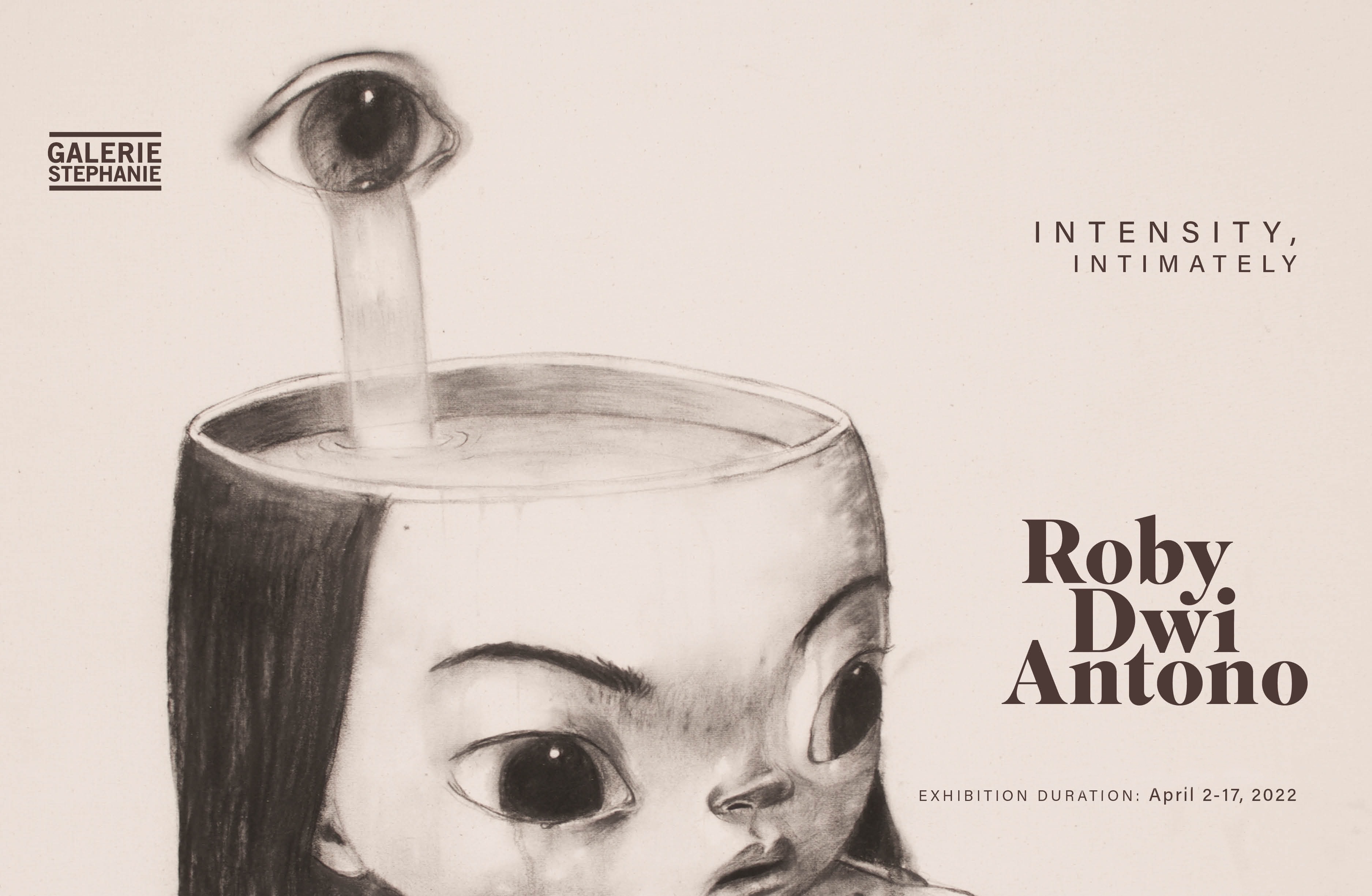 Sonja Dahl in her essay on the 2016 issue of Parse Journal can be a succinct grounding for Roby Dwi Antono’s practice through his most recent works in Galerie Stephanie in 2022: “Nongkrong is an existential process.” Nongkrong as a sociological marker has been recently cultivated by cultural practitioners, art theorists, policy makers, and commercial stakeholders to further unravel and codify some of the creative processes found in the largest South East Asian archipelago. Securing translatability or assimilation into other Indonesian languages as the word is now of the Bahasa Indonesia linguistic mainstream originating from the Javanese, nongkrong (or kongkow) as a denotation perhaps elicits a nuance of statehood despite the word defining an informal state, context, or condition. As a word that has values needing very specific and high-context semantics, nongkrong escapes direct equivalence in the popular English language. As a vessel of soft power, the word is becoming –in artistic discourse and cultural exchange– a standardisation of a way of seeing Indonesian art. (To refer: We know the Chinese term Hallyu is the South Korean soft power wave in the arts, media, and culture.) Nongkrong may be an activity or a situation; a state of being and, as quoted above, a process; or a space-time to be transpired.

We may transliterate nongkrong into the Filipino colloquial tambay. Tambay may be derived from the American English post-war ‘standby’ but has then evolved conversely to imply people who are not always at attention as it describes a person, a place, or a situation which deliberately eases into the improvisation of moments and (non-)reactions, and like nongkrong, into a state of non-productivity.

If we were to then overlay nongkrong as the ritual and the scene at Roby’s latest happening in Galerie Stephanie titled Intensity, Intimately, the set may be seen as Roby’s journal of several hangouts within the archipelago of opportunities that he consciously sustains through a constellation of art industry players in his midst. Experience and exposure through the graphic design industry and art show circuits in Indonesia prepared Roby. Roby’s ventures into the contemporary art scene of South East Asia are maintained by nodes of connections; One of these is his representation through the Philippines’ Galerie Stephanie. This dialogue with the gallery for the past years enables Roby’s storylines and enclosures occupy a spot in the larger tambayan of material culture and dynamics of the Philippine arts scene, with pop culture as a potent point of reference and intervention. ‘Imagineering’ is mutual for Roby, his followers online, and his patrons. This active participation within these circles makes Roby a very active and productive participant of making and offering taste, as his creations then and now candidly break through assumed types of visual consumers. Contemporary art makes this possible, in an age when the polarity of image-making becomes more apparent: On one end, globalisation homogenises signs and symbols, which plays for or against the distinctions that localisms rage for on the other end.

Jose Naval in 2021 elaborates on Roby’s practice through the Curiosities exhibition where Roby was paired with Japanese artist Keiko Yokoyama: Roby shuttles between his fine art world and the wider popular culture through his signature of Pop Surrealism. Palpable in the latest monochrome sets of istambay featured in Intensity, Intimately, we are keen to infer Jose’s observation of the immediate transfer of motif and affect of Roby’s figures from recent Modernist and Postmodernist citizens who subsist on mass media imagery. Television and print images are the bedrock of Roby’s works; a particular millennial setting is presented because of the tropes that Roby is keenly aware of.

Unlike Roby’s previous collections handed over to Galerie Stephanie, the sheen, shine, and sparkle are not present in the works for Intensity, Intimately. The temperament of the troupe is but still held in the traditional, western school (l’academie) of visual framing: An anthropomorphic subject is encased as a portrait, regardless of the captured post. The poses may seem still and stolid; action lines are used sparingly in the works. (We can only see on the pastel work An Asteroid Strike two threadbare strokes and an adulterated comma in the background defining the flying object’s westward transit.) Roby crafts the senses of crudity and sluggishness through rough outlines, bleeds and drips, powder flecks or smudges, and crumples. These make Roby’s floating foci adaptive to any setting: a moist ground for play or murder in a jungle, a not-so-far stratum above earth, a smelly ghetto, or an ascetic room in a quarantine facility. Without colours, we are given more freedom for ‘hot thinking’, much like how our brains act when we listen to a radio show: Through Roby’s careful orientation of his actors, we can actively fill out the variances or gaps of the mise-en-scène.

The rawness of the artist’s oil pastels easily prompts children’s drawings. Roby, like his contemporaries, acknowledges the blur of distinctions between high and low art through deconstruction. Like plastic (and toxic) toys made from industrialised process or bespoke beings made from backyard tools and dirt, the works suggest eeriness and discomfort because of the bricolage of human, non-human, natural, and artificial parts. The charcoal works on the other hand have images in fuller volumes as Roby renders light and shadow. In the work Intensity, Intimately, Roby breaks apart the bodies and rearranges them as entities doing a nongkrong or a tambay time. We may see four discrete entities: the eye, the head/bucket, and the two headless and naked bodies in repose. An overreading of the scene is that this is a confessional among lovers. Or this maybe is about someone speaking to itself. The bodies lying on the ground have suppleness that may indicate the coming of age. The head, though configured in dimensions appropriating those of a child’s, seems however like an adult compelled to arrive at an important decision as she gazes eastward. An ‘active unproductivity’ is encapsulated by Roby in this work.

The superficially different registers of oil pastel and charcoal converge nonetheless through the subjects. As in his works in prior projects, Roby’s characters can be considered as a genre of a kawaii or ‘cute’ in Japanese, flanging between kimo- (creepy) and guro- (gross) kawaii subgenres. The derivations and variations from Japanese pop iconography is explicit, such as in Roby’s work Ridoron which stems from the 1971 live action tokusatsu and multimedia franchise Kamen Rider. Ridoron (or Raidoron, Ridelone) in the taxonomy of this Japanese fictional universe is the car used by the first hero in the series. In Roby’s work, Ridoron the automobile is replaced by a dragon or lizard ridden by the masked grasshopper-looking hero. The hero’s proportions are packed into the chibi animation/drawing style and the abstraction is further doubled-down with the simplicity of thick lines and opaque fill up on the form.

As seen in the face (regardless if it’s wearing a mask) on the Ridoron work, we assume Roby’s interest to naturalise the magical, the fantastical, or the grotesque as beings who naturally cry, sulk, or smile because of the circumstances that might be beyond the diegetics of the graphic plane. Boredom, sadness, or fury, the emotions of Roby’s characters are in situ. The characters are in their moment of their emotions. This is reflexive of how we as image consumers-producers have been so accustomed to documenting split-second emotional change through our camera phones. The aim for candidness is intrusively woven through Roby’s graphic compositions, which does not necessarily have to be visually explosive, intrusive, or scathing. In the recent world of virtual nongkrongs/tambays amid the standbys brought about by urgencies and delays, Roby stands by his characters, giving them the nuance and venue to play out the hangout that the inner world offers them. Intensity, Intimately may be inferred as an invitation for us to acknowledge concrete time and space for communal unproductiveness and for collective respite to survive a world that precariously feeds us with notions of unrealistic success and self-serving progress.

“A Time for Tambay: Variations and variances of standing by in the works of Roby Dwi Antono” 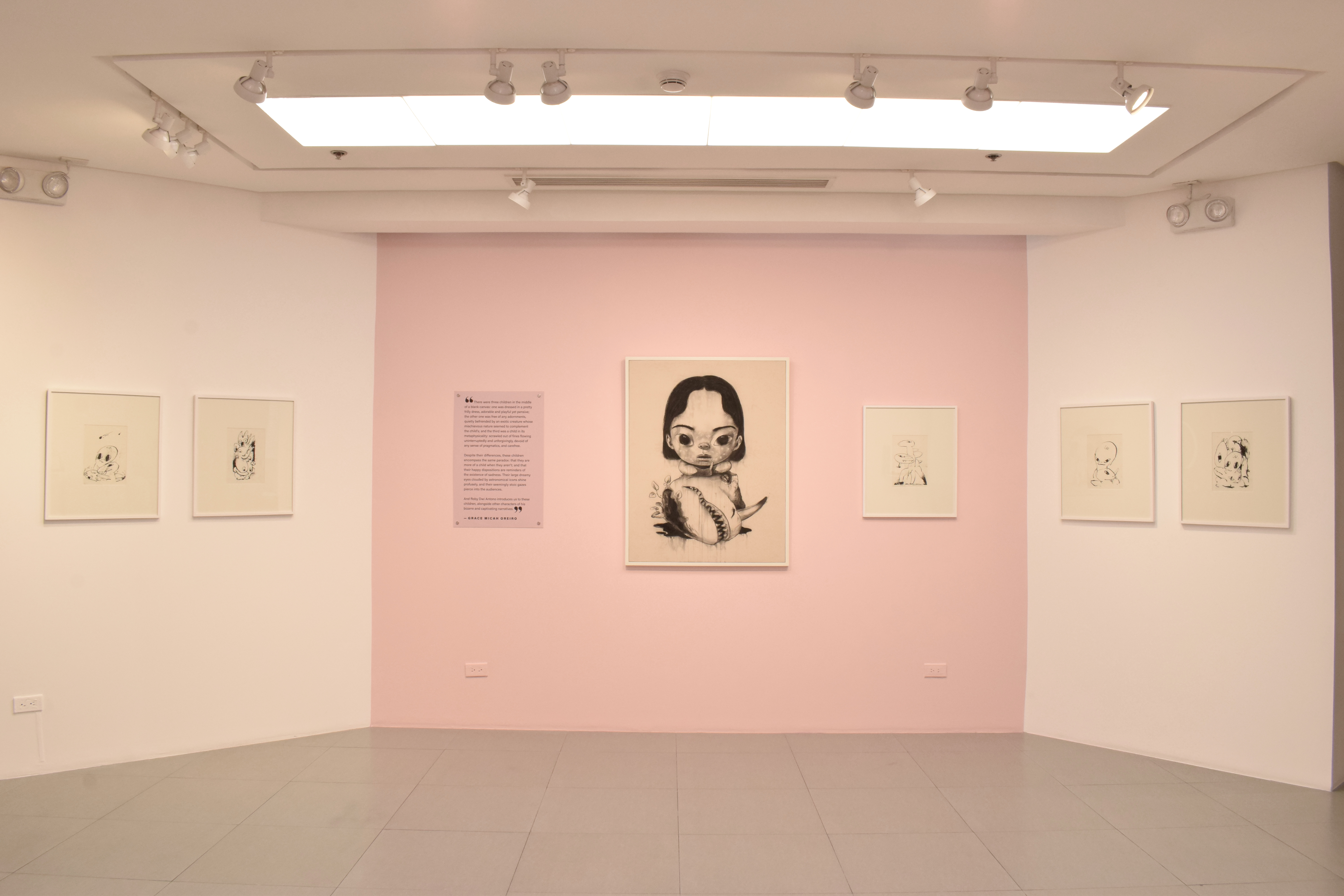 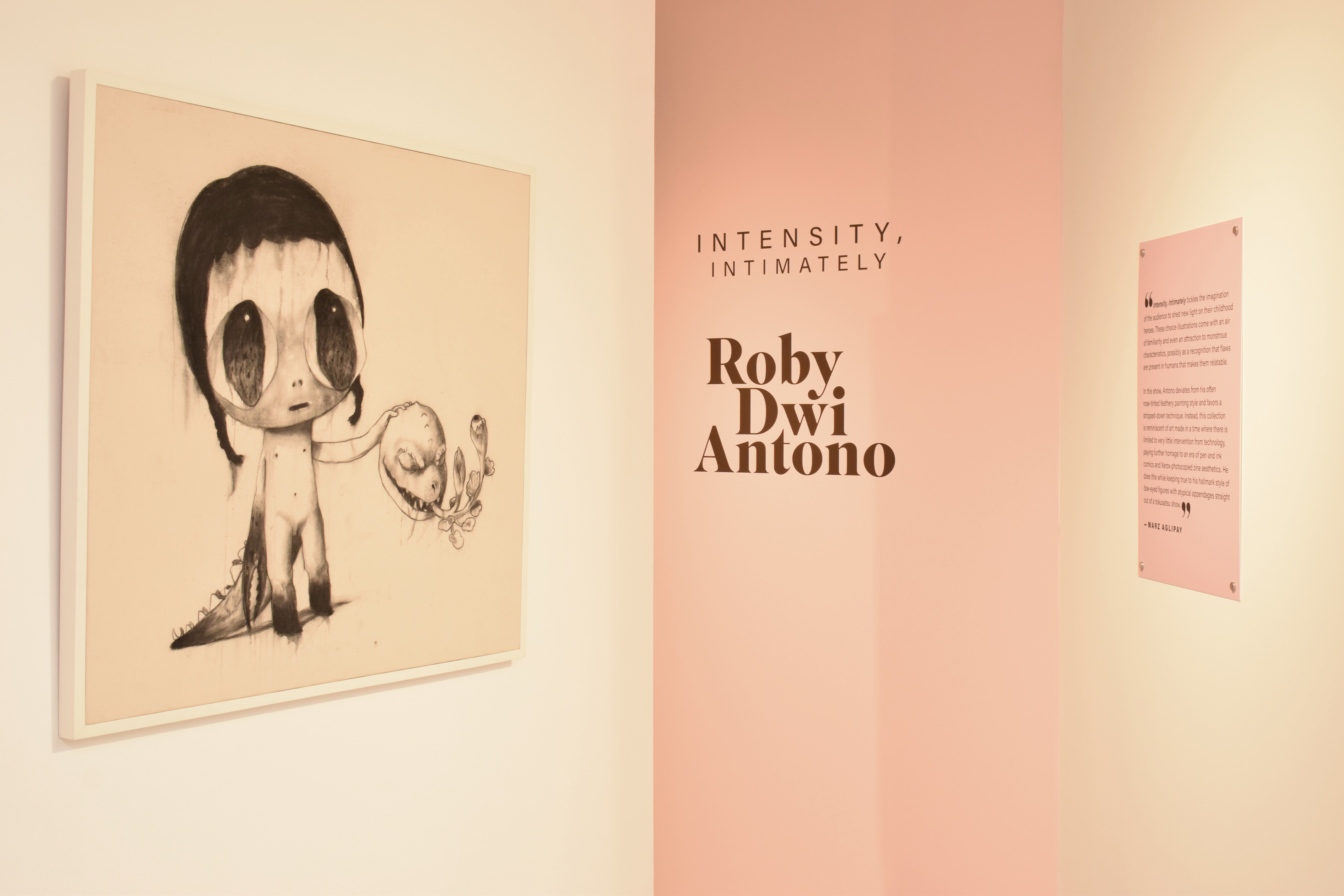