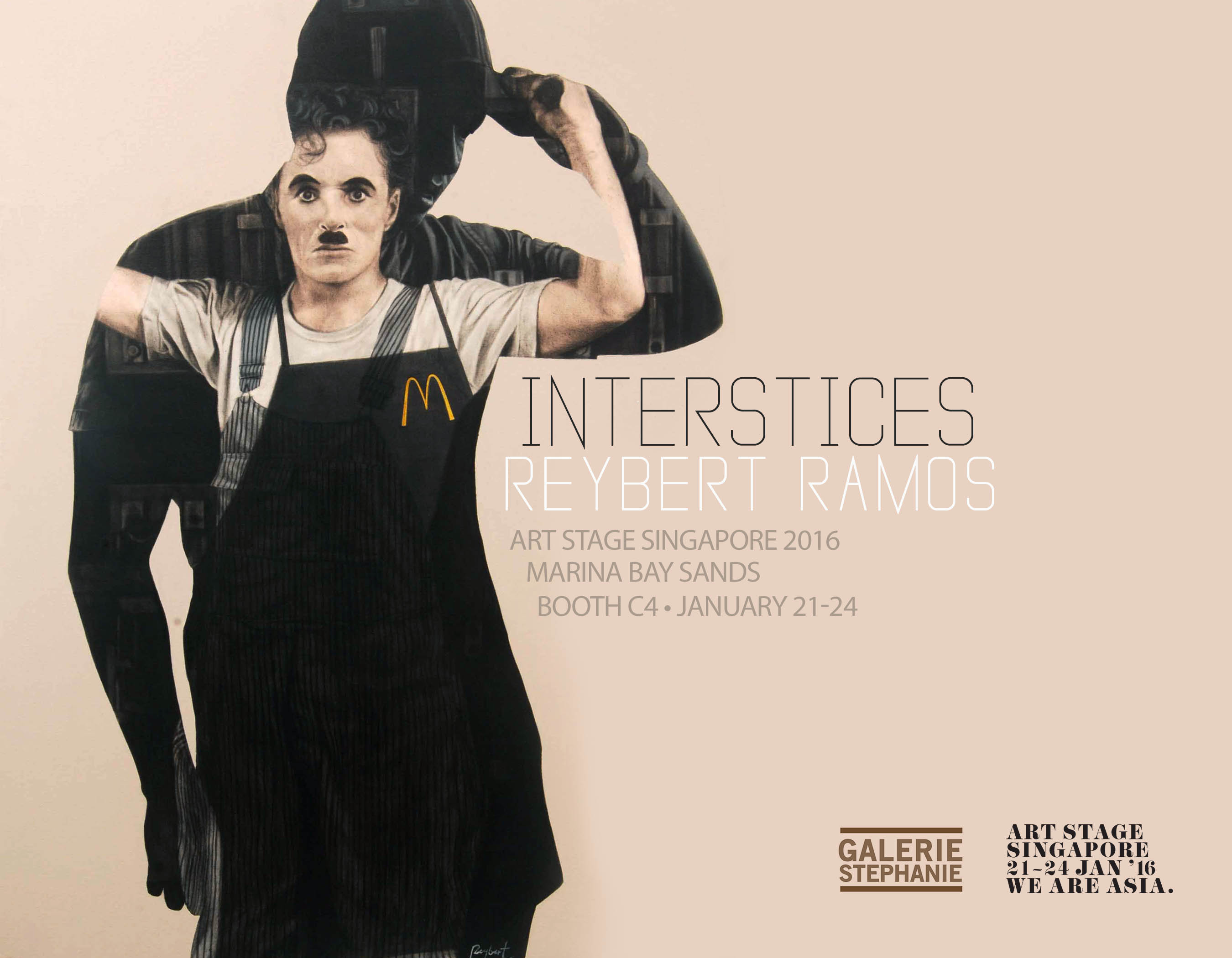 INTERSTICES, is an exhibition of paintings that outline the relationship of transformative nostalgia and the intended socio-analytical thematics of Reybert Ramos’ whole body of work, while attempting to reflect upon the central question of what’s at stake for painters today: “Has pluralism created an atomization that’s done away with a collective meaning?”

From 1900 to 1960, painting was either representational or abstract. By the ’70s, the question had become, “is painting dead?” partly because of the work of minimalism, and the serious attention given to photography. The last five decades of the 20th century have honed in on the nature of perception, i.e. temporarility through painting, how we perceive a figure, and the difference between reading and mark making. Painters no longer work toward some sort of “theological endpoint,” as do many genres today, e.g., the way Hollywood has Westerns, sci-fi, film noir. etc.

Reybert Ramos’ paintings explore a direction akin to early avant-garde filmmakers whose works lie between terrains of compilation, appropriation and a collage of images. Films of such are composed of visual quotations of history (or more precisely, selected moments of historical “reality”) that have been ripped out of context and placed end to end according to the filmmaker’s theme or argument.

“Not only are the pictures in the archives often literally for sale, but their meanings are up for grabs.[1]”

INTERSTICES capitalizes on this idea by utilizing personal iconography that simultaneously carries collective meaning—the historical pop film icons. These paintings are portraits of some of Hollywood’s most iconic fictional characters. From portraits of Indiana Jones, Atticus Finch, and Terry Malloy, to Charlie Chaplin—another layer of images is set in to produce a collage, letting the viewer perceive the images as if they were gazing through a looking glass. These portraits are then set side by side with paintings of objects (or symbols taken from the subject’s fictional worlds) of contrast and likeness, experimenting with the conjunction between iconography and iconoclasm.

Reybert recycles images from Hollywood to purposely allow disparate images to appeal to collective meaning; asking the viewer, what do these characters symbolize in the society of their fictional worlds? These recycled images call attention to themselves as images, as products of the image-producing industries of film and television, and therefore as pieces of the vast and intricate mosaic of information, entertainment, and persuasion that constitute the media-saturated environment of the modern—or many would say, postmodern—life. By reminding us that we are seeing images produced and disseminated by the media, these images open the door to a critical examination of the methods and motives underlying the media’s use of images.

To open the door is one thing; to go through it and confront the media on their own ground is another thing. Reybert takes this a step further and draws most heavily on the ultimately political resources of montage.

Rogue Magazine: “All the World’s a Stage”