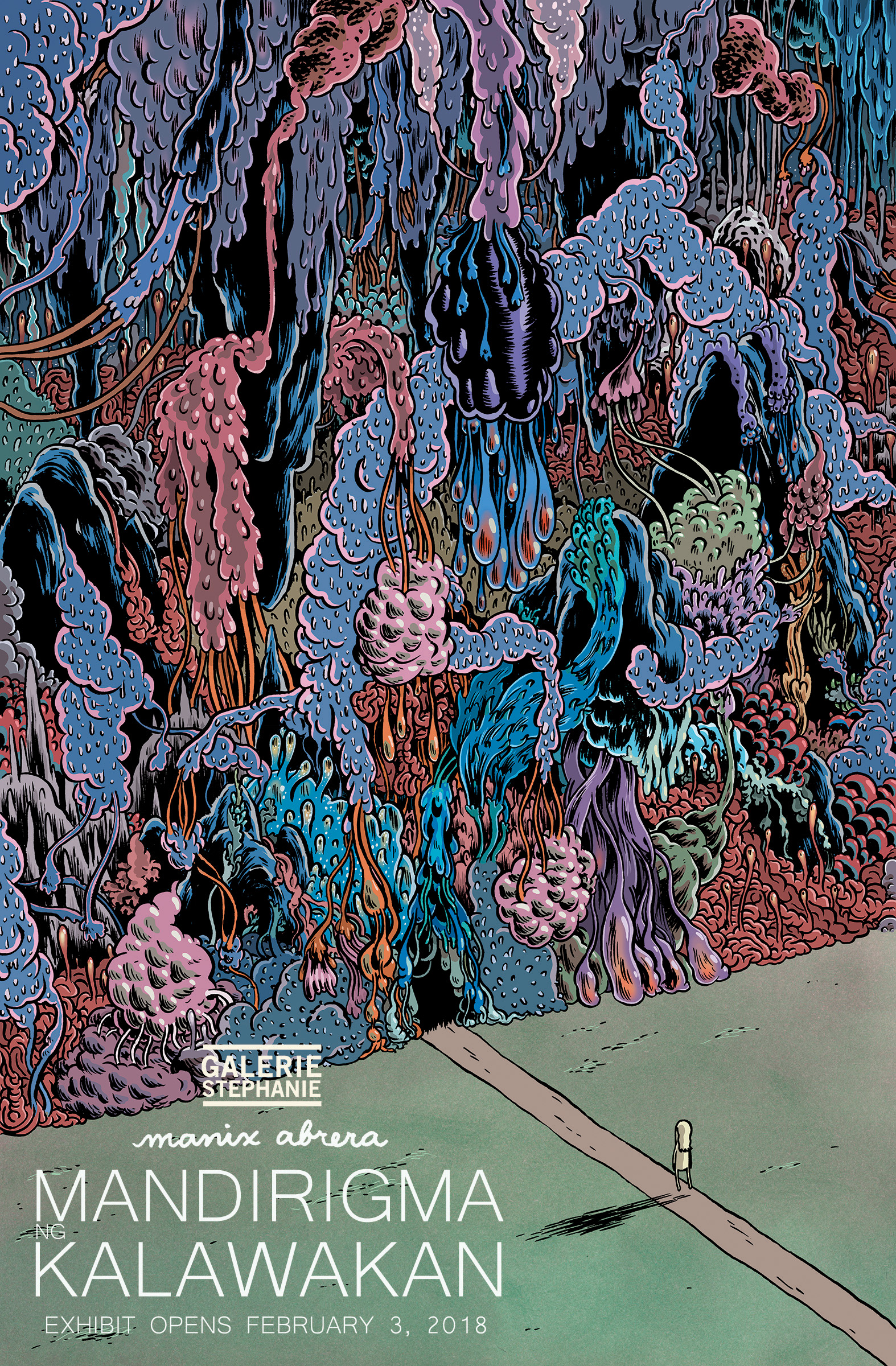 The paths we choose to take and explore ultimately define who we are. These paths initially instill a sense of fear of the unknown and an excitement of the things yet to be learned. However, in popular cartoonist Manix Abrera’s fourth solo exhibition, the idea of the “unexpected path” is presented in a comic-like narration without the speech bubbles. It leads into a jungle of emotions and questions that ultimately revert as an optimistic view of the foundations of our choices and what we make of them.

Continuously heralded by a singular prominent character amidst an engulfing overgrowth, his pieces from this latest installation portray a wonderful sense of balance between solitude and chaos—two factors that decorate the state of human mind when choosing.

The name “Manix Abrera” (sometimes completed with a smiling icon or a jumping figure at the end) has resonated as a popular reference in the comics industry and rightfully so. For more than a decade, he has produced thousands of comic strips appearing in a daily newspaper, magazines, a dedicated section in a news website, and even on junk food packaging. His Kikomachine Komix’ immense following has materialized in 13 book compilations under Visprint. He also even produced two silent comic books “12” and “14” to back up his publication repertoire. Strongly influenced by the likes of Hergé and Moebius, he deviates a similar sense of philosophy and heart in his works, cultivating his storyline with prevalent Filipino quirks and antics.

For his fourth solo show (his second in Galerie Stephanie), this UP Diliman graduate seeks to narrate the wonders of making choices visualized as paths. Mandirigma ng Kalawakan is vaguely reminiscent of one of Robert Frost’s famous poems, with a harmonious echo of human sentiments.

Unlike his previous exhibits, the artworks present in his fourth showcase are all exclusively done for this endeavor. Manix says he enjoyed this dedicated work process as it revolved on a central theme, and even had the absence of his popular comic strips. However, the artworks still hold independent stories and deviates from his usual comic series setup. Take for instance his “Dalingsil” and “Unang Ulan ng Mayo”. The first artwork presents a lone figure in the middle of a dense cluster, further exuding a dreadful yet exciting feeling of being lost or going astray; whereas the second artwork manifests the popular belief of being blessed with luck during the first rain of May as seen in its animated alien-like foliage receiving the faint droplets. These two seemingly unrelated artworks, however, prevails with a common denominator—welcoming the wonder of ambiguity. This warrior-like characteristic is evident in most of the other stories “suggested” by the artworks, since Manix emphasizes that the message of these works is still dependent on how his audience connects with them.

Since it is already evident that his ability to conceptualize meaningful themes is admirable, it is also good to recognize his equally commendable execution and process. Having been fond of patterns, Manix found it enjoyable to be able to integrate very detailed and seemingly organized squiggles. His process begins with ink on paper, which is later on painted digitally. By incorporating creative digital trends, he puts gravity on the digital art scene. Though his works’ genre is quite difficult to pinpoint, this mere fact makes his style stand out as if he is establishing his own.

When asked what artwork best reflects the exhibit’s concept, Manix cites “Mandirigma ng Luwal-hati” as the flagbearer. This piece indeed spells well what Manix has been trying to narrate—a lone character looking at an “entrance” to another world, whatever kind of world it may be interpreted as. It bombards us with emotions of fear, anticipation, curiosity, and self-discovery—all pivotal elements of classic adventures. This digitally rendered artwork presents a stark transformation in scenery with the forest combusting in cool, quiet shades of blue and purple, and energetic accents of red, to amplify the passage to a new chapter from the pale green landscape.

His works take on an aesthetic array of geometry, playing with shapes and negative spaces. Some pieces like “Sentro ng Kosmos” take a collective narration of three pieces framed into one. Most of the artworks are done in ink and graphite on paper, where most of them have digitally-colored versions printed on archival papers and canvases.

Manix also recalls that one of the “unexpected paths” he took was making comics and storytelling his full-time career. Likewise drawn from the idea of spacemen, Manix takes his audience to a vast sanctuary to reflect on the paths they traverse in their lives. He quips, “Yung iba malinaw. Yung iba malabo. Yung iba hindi pa nahahanap. Yung iba umaalis sa beaten path…Para tayong spacemen na nag-eexplore.” Indeed like a warrior in space, we continue to discover an unfamiliar realm symbolizing a future we cannot predict, but only influence. 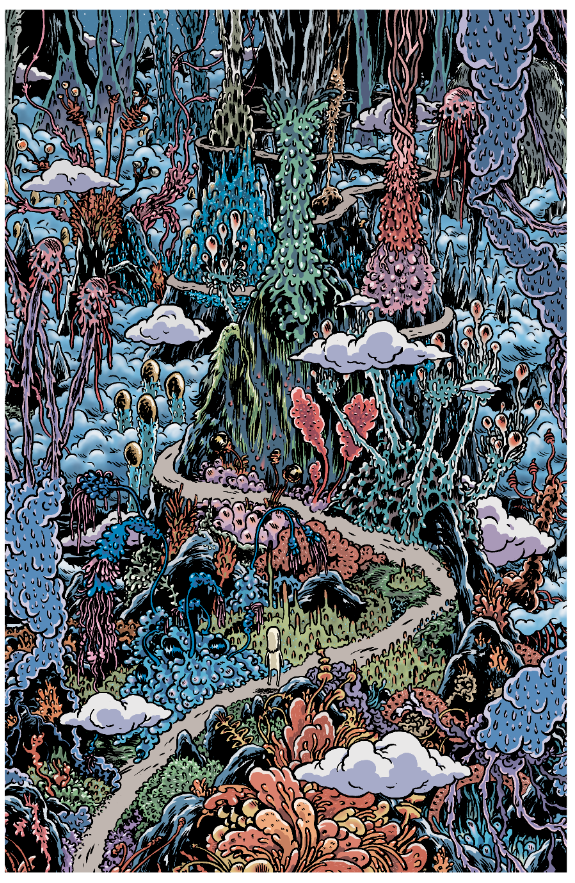 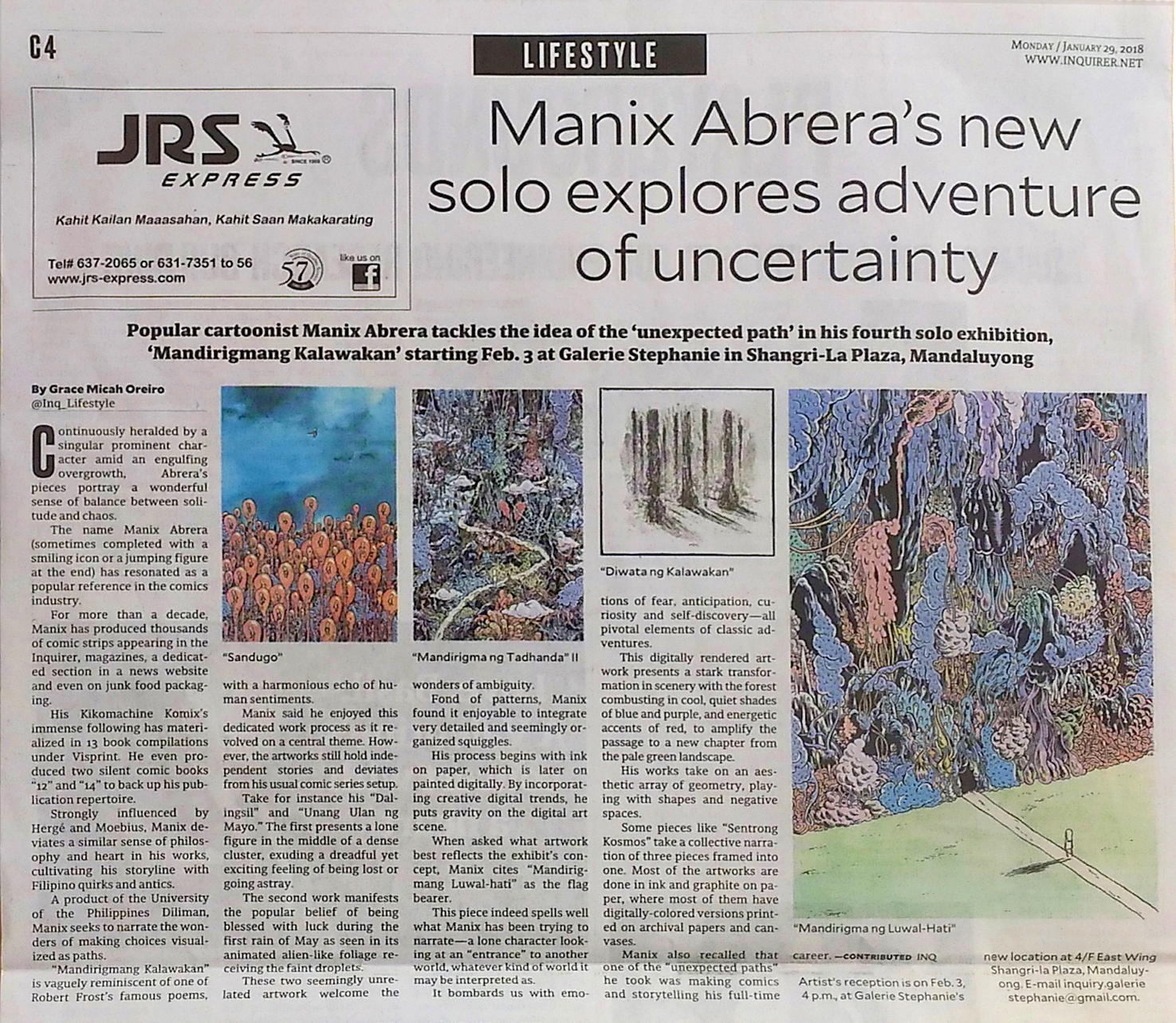