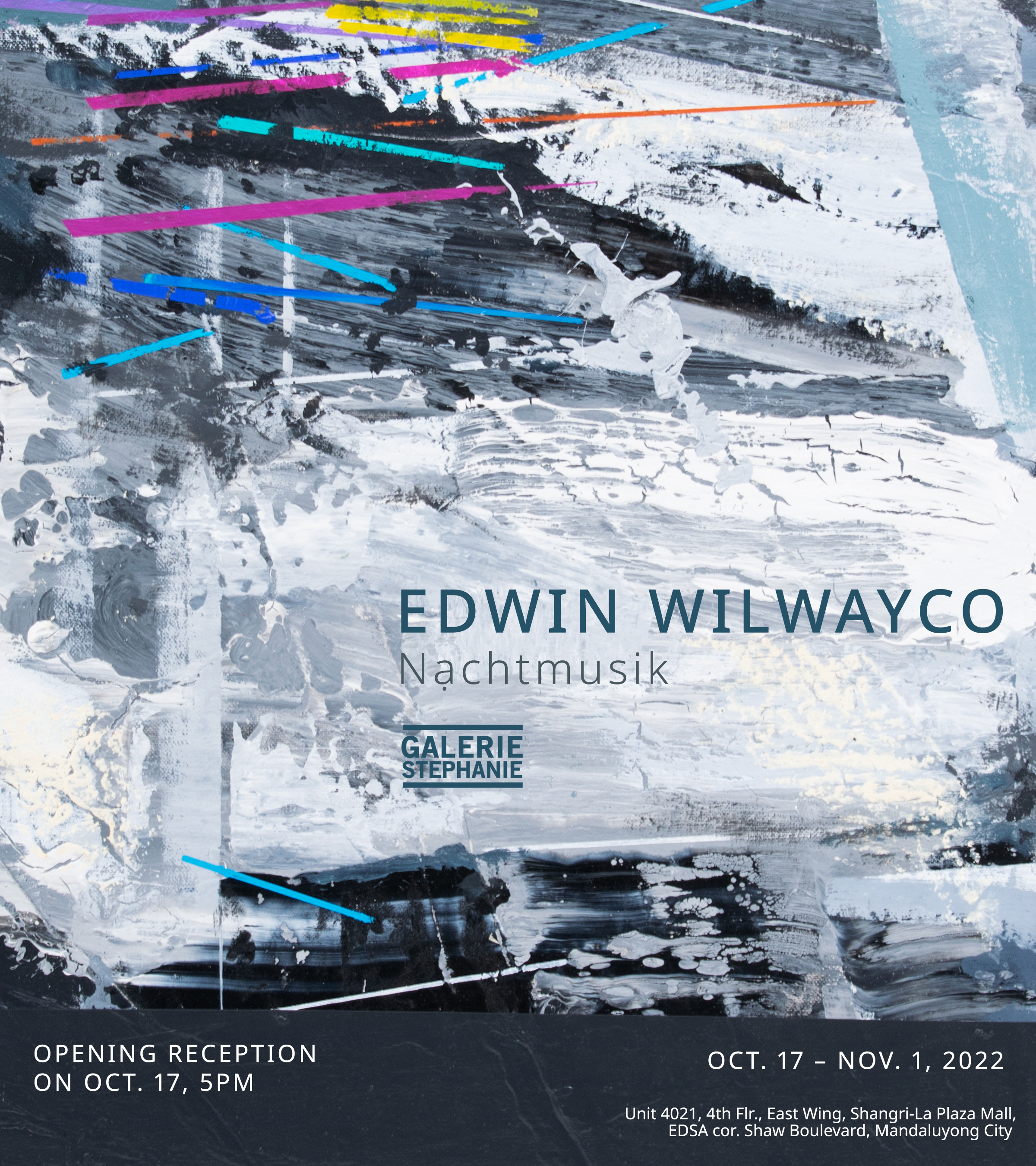 Edwin Wilwayco: Color in Between, Red and Blue
by JF Martins

In the moody, mysterious, and enigmatic Color in Between group of paintings, Edwin Wilwayco challenges the viewer to consider Wolfgang Amadeus Mozartʼs most recognized and appreciated Eine kleine Nachtmusik, 1787, as the musical representation of nighttime colors red and blue. Eine kleine Nachtmusik is the German title of Serenade No. 13 translated into English as A Little Night Music. As a serenade, it grabs and then entraps the listener into a position of attention and relaxation to conjure up an emotive potential dreamy quality; a condition of possibility, where all things can be imagined, both darkness and light. It is the space of fairytales and the soul, and as is understood: fairytales are not always comfortable.

While the colors red and blue appear as dramatically opposite forms to each other, they are the most important primary colors, along with yellow; being highly potent visuals that when mixed together, they form the mystical violet or purple shades and tones. Violet is the in-between color of dreams and intermediaries, hence the “color in between”, an other-worldly, sleepy, elevated, and enlightened, sometimes psychedelic experience. This makes violet, the mixture of blue and red, the true representative color of Eine kleine Nachtmusik – the dream world.

One of the best Modern period scenes of the color blue with a touch of red is in Marc Chagallʼs The Dream, 1939. In this charming painting, a man and woman embrace on a bed in a loving moment while an angelic figure, possibly an angel hovers over them, while they are surrounded, in place within a village of blue and green toned houses, with one red brink house to the far right corner. Chagallʼs panting is worth a view in comparison to Wilwaycoʼs blue abstract paintings in regards to examination of the blue theme and its emotionality.

As we return to Mozart, to arrive in the haze of sleep-dream and its violet shades, Mozart sends the listener on a sound journey, and Wilwayco engages the viewer into a heady, imaginative, and intellectual consideration of sunsets: end of day, hot red light, and sunrises: start of day, cold blue light. When blue and red are held along side each other, as they are by Wilwayco in Color in Between, not blended, they evoke a fugue emotive state, the profoundly transformative dissociative condition.

Eine kleine Nachtmusik is organized into four main sections, each corresponding to a specific nocturnal aspect: Allegro ( a brisk high moment); Romanze (tender lyrical movement as in a romance); Menuetto ( a minuet dance, graceful with balance and elegance), and the Finale ( the ending which can be high or low is position). These stages naturally mirror what happens biologically in the four aspects of sleep, a physiological process which allows the brain and body to perform cleaning and repair function necessary for healthy living and mental health. During this process, dreams come alive in brilliant coloration and vivid imagery, often the inspiration for art as in painting, as is seen in Wilwaycoʼs Color In Between. Music critics and historians point to and have identified several more complex structures within Mozartʼs composition, as layered forms that add weight and depth to the sound. These sections are aligned in a general manner to Wilwaycoʼs Color In Between as each painting alludes to a different condition of musical construction and mood, also layered to bring out and hide various other colors as in a subtle pulsating condition. The physical properties of the paintings, the solid size of each one, which is variable, and the heaviness of the paint is an equivalent to musical sound texture.

While considering Wilwaycoʼs paintings against Mozartʼs Eine kleine Nachtmusik, it is useful to remember that Sir Isaac Newton included the various blue spectrums in his structure of the visible color. For Newton, colors corresponded to musical structure and scale; he included indigo, the hue between blue and violet, as one of the separate colors, though today it is usually considered a hue of blue.

Another interesting and potentially significant item to consider when looking at Wilwaycoʼs Color in Between, is Mozartʼs opera dramma giocoso, Don Giovanni, the opera that Mozart wrote in the same period as Eine kleine Nachtmusik. Don Giovanni holds a number of variable themes all of which conclude a narrative of blue and red uncomfortably: comedy, melodrama, and supernatural events and situations. The colors associated with Don Giovanni are blue and red to symbolize his dark personality. The musical score for this opera features woodwinds, horns, along with strings to place the environment within a highly anxious condition. Don Giovanni is a thundering, fanciful, young and arrogant nobleman / rake / libertine disliked for his rude and violent behavior much of which happens within the nachtmusik world.

Color In Between hosts 7 Blue paintings in the group. They are primarily in a horizontal orientation with only one : Blue No. 6 being in a vertical orientation. In Blue, the deep tones of Mozartʼs Eine Kleine Nachtmusik are felt in the wide and lust brush sweeps across the canvas in oil. In this group, various shades of violet, purples, and touches of pink are observed presenting a range and layers of in-between and unsettled frequencies. In Blue No. 5, the main theme of purple intermediates are strongest. In this painting at 18 3/4 x 24” in oil, dramatic and elevated shades of blue in indigo, turquoise, lapis, and other blueish tones, are loose mixed with white tones to form a spectrum of purples. In Blue No. 4, thereʼs a surprise in the inclusion of the other primary color yellow as an underlay to top tones of pastels in aquamarine and lavender shades. The inclusion of yellow gives the form a burst of excitement within the composition, to pull the viewer back away from the purple and blue haze of dream world into the reality of light.

As for the color red, it holds a bombastic power quality always associated with the heights of life and death – blood. Red pigment was one of the first colors used in prehistory in art, and is historically associated with the high physical events of life. The paintings and drawings associated with ritual in Spainʼs Cave of Altamira are in the red ochre substance, for example. During the inventive and symbolic Renaissance, red was the color employed to draw attention from the viewer to significant element details in a paint and work of art. In the Modern period, red is associated with a variety of conditions everything from war and danger to fashion and royalty. Most importantly, in religious sources, red is often associated with evil, particularly that of Satan in popular culture,and yet it is also a symbol of the potent blood of Christ. In Hinduism, red is the color of the goddess Lakshmi, who embodies wealth and beauty. Sunsets and sunrises are both colored red in the optimal conditions when the optical effect of Rayleigh scattering is correct. Moreover, the planet Mars is called the Red Planet due to its surface being that of iron oxide. How does red evoke in Eine kleine Nachtmusik? How and what does Wilwayco do with his reds?

The Red group of paintings in Color in Between are like the Blue, 7 in number, for a balanced presentation that matches Mozartʼs composition. In Red there is a higher variability of canvas size. In this group, the sinister aspect of red is most strong because thereʼs a higher depth of deep purples within the red, blue, and white mixture of paint. Here the oil seems heavier, more robust in the layering, alternating to thin with some areas such as in No. 6 to splashes and splatters of red over a slight yellow under-paint. No. 7, a smaller painting at only 18×22 is a lovely evocation of a sunset over water. No. 5, is the best aligned with a hot sunset on a summer storm filled sky evening, with blasts of orange reds is fat lust brush over a deep blue underscore. Wilwaycoʼs Red group in Color In Between hits the viewer with heavy emotionality and passion, a contrast to the coolness of Blue.

In Color in Between, Wilwayco forces a possible argument, an engagement as to the question of what is the exact intermediate color between red and blue, and how Mozart fits in with the comparison. Eine kleine Nachtmusik is usually considered a light-hearted composition, but does it hold a deeper, darker, and terror filled meaning? The paintings in Wilwaycoʼs Color In Between group engage traditional imagery especially in Catholic philosophy as seen primarily in Medieval art, in which the blue directly represents the divine Holy Mary, Mother of God, and the red represents the burning heart of Jesus Christ. Wilwayco continues to be a master who allows for interpretation of his abstract paintings, encouraging the viewer to contemplate and personalize the colors and forms and consider in meditation, or prayer, the mysterious nature of art and the human soul.