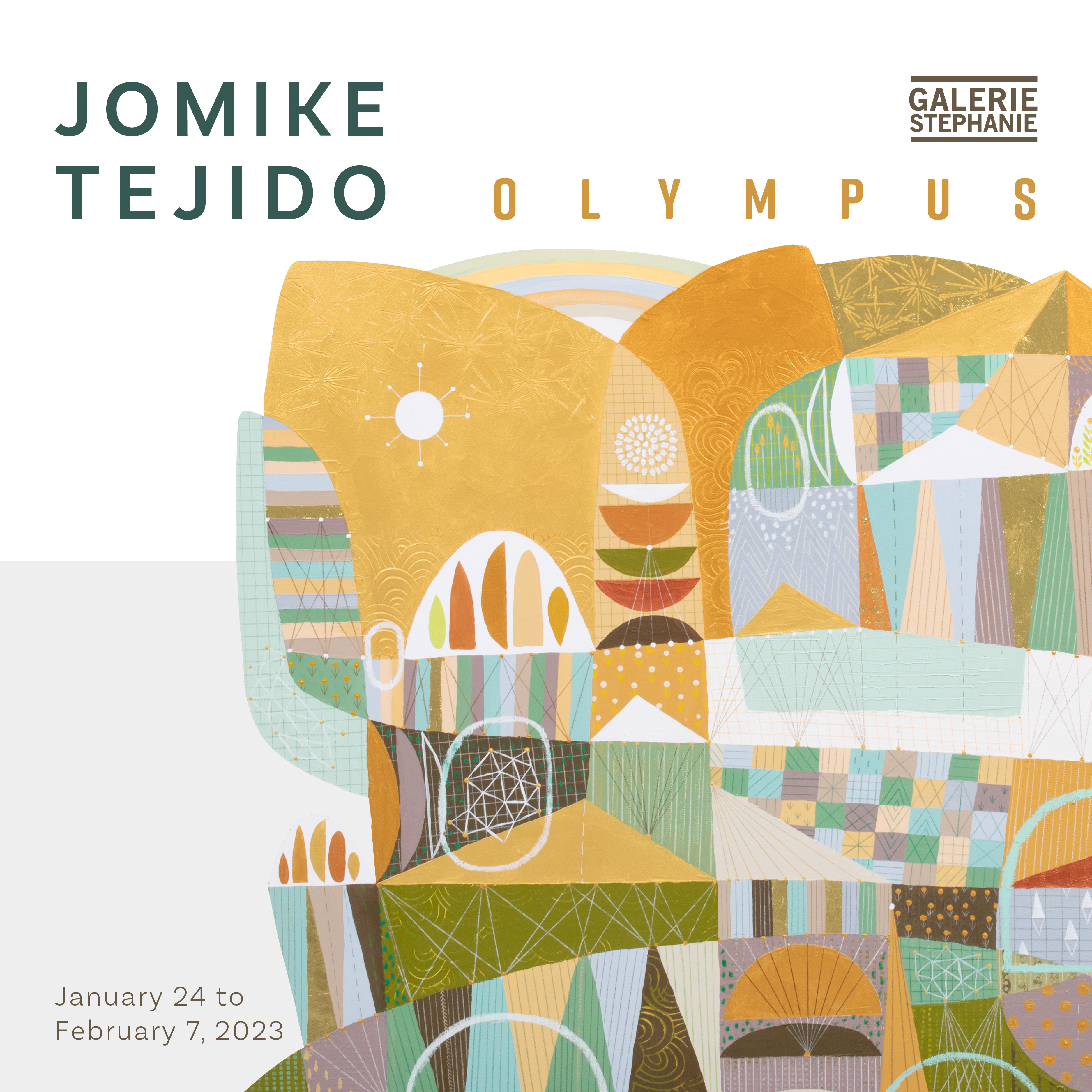 Unsheathing lore and adventure, “Olympus” depicts the ancient Greek deities through contemporary abstractions and explorations. His works represent the eminence of Greek mythology and their homes, narrated through acrylic and gold leaf on four-feet canvases. The signature organic shapes of structured abstraction and balanced colors sprawl throughout Tejido’s works, merging his fascination with mystical fantasy and his affinity with architecture.

In his solo exhibition, Tejido’s use of mid-century shapes and palettes complemented the idea of the mythology’s ancient abstractions. The towering figures of gods and goddesses portrayed in definitive colors and elements that each deity possesses. The almighty leader of the Olympians, Zeus is portrayed in powerful blues, immaculate whites and rich browns that embrace a sharp golden outlay in the corner, seemingly molding a narrative of the sky, sea and earth as well as his notable thunderbolt. The other immortal personas are donned in distinguishing shades: Aphrodite in her tender hues of magenta and lavender, Artemis hunts through verdant greens and deep amber, and Poseidon emerges from deep cerulean and midnight sapphires.

Much like these godly symbols, Tejido sets the scene further through their architectural counterparts in forms of temples. These structures are laid out in conjectural combinations of angular shapes with more defined movements depicting the journey of their “Constructing”.

Complementing the honors of these mythical icons, Tejido also incorporates the presence of mortals amidst the circle of the undying through a work called “Toys of the Avant Garde”. “In this set, I made 12 everyday people out of a very mundane and relatable object—children’s wooden blocks,” he shares. These woodblock sculptures put a laconic trajectory from medieval ideations to the familiar present, incorporating vocations that are imbibed with personal stories of heroism: “They are people that one may consider a personal hero, may it be a parent, a child, an animal companion or a food vendor who brings us simple joys.”

“Olympus” is a remembrance of the glories that were founded on moralities and heroic journeys that have shaped our modern-day ideologies–creating nobility out of the ordinary, temples out of mere stones, and legends out of quiet stories yet to be told.