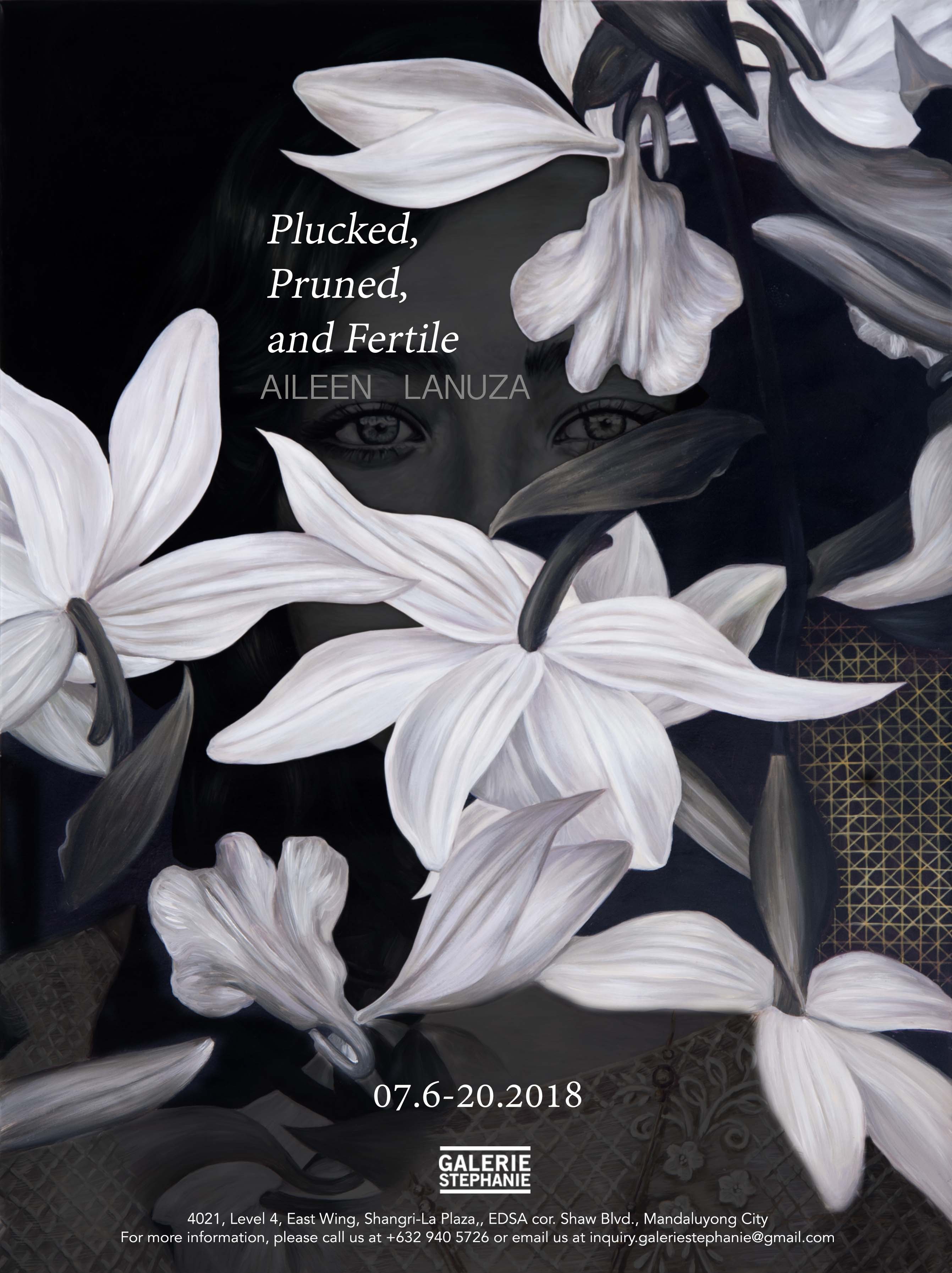 Since graduating cum laude from the University of the Philippines’s Fine Arts program, Aileen has spent the last 15 years of her professional art career consistently growing her artistic concept and stature. Since 2003, she has had over 60 group exhibits in the Philippines, Indonesia, Singapore, Hong Kong, and Canada; five solo exhibits; and has been auctioned off in seven local and international auction houses. Her artworks have appeared in the publications “A Treasury of Philippine Nudes,” “Larasati: Pictures of Asia,” “Rhythms: Philippine Dance on Canvas,” and “Filipino Artists in Their Studios, Vol. 2” to name a few. Most recently, she participated in the “Buhay UP” exhibit celebrating the 10th anniversary of University of the Philippines’ national university charter, mounted her 5th solo exhibit, “Piercing the Veil,” and was featured by entrepreneur and TV personality Daphne Oseña Paez on the Cignal TV show ‘Create.’

The artworks in Plucked, Pruned, and Fertile exhibit Aileen’s effortless grasp of technique, her skillful use of stroke and highlight bringing lifelike vivacity to her impressionist subjects. Concealed by garlands of lilies, roses, and hibiscus, the female personas appear demure and mysterious, the blossoming flowers standing in place of sight, sound, or voice. Once prosaic senses transform into sensuous festoons of verdant life, gaily decorating the Filipiniana garbed women in that quintessential symbol of reproduction and rebirth, chastity, passion, and femininity.

Historically, the feminine ideal has been typified by the symbolism of the blooming flower – a white lily of the valley represents the purity and chastity of the Virgin Mary, Renaissance portraits of women often included bouquets to convey fertility and beauty, and Freud’s dream symbolism took flowers to mean virginity, as well as the female genitals. Both flowers and women constitute classic subjects in male-dominated art history: one as still lifes, and the other as nudes. As 20th century women became able to pursue careers outside of the home, so too did their careers in art redefine feminine identity and sexuality. Frida Kahlo depicted a wilted orchid in ‘Henry Ford Hospital’ to allude to her sense of incompleteness as a woman, Judy Chicago created floral ‘cunt imagery’ paintings to assert her identity and sexuality, and then the Guerilla Girls most famously brought to light the representational disparity of women artists versus women nude paintings in the Metropolitan Museum of Art.

Reading Aileen Lanuza’s artworks with this lens of contested symbolism reveals shifting interactions between the magnified floral decor, the female subject, and the viewer who is met or not met by her gaze. By varying engagement with the viewer, Aileen brings forward the suffocating restriction of female stereotypes, but also women’s rebellion against inequality, and eventual reclamation of feminine symbolism. With a title that could refer to both plants and persons—Plucked, Pruned, and Fertile—the works allude to this fraught history, while taking control of it to empower women. Unapologetically sensual, confident, and akin to the flower’s verdant energy, Aileen Lanuza espouses the strength of today’s women.