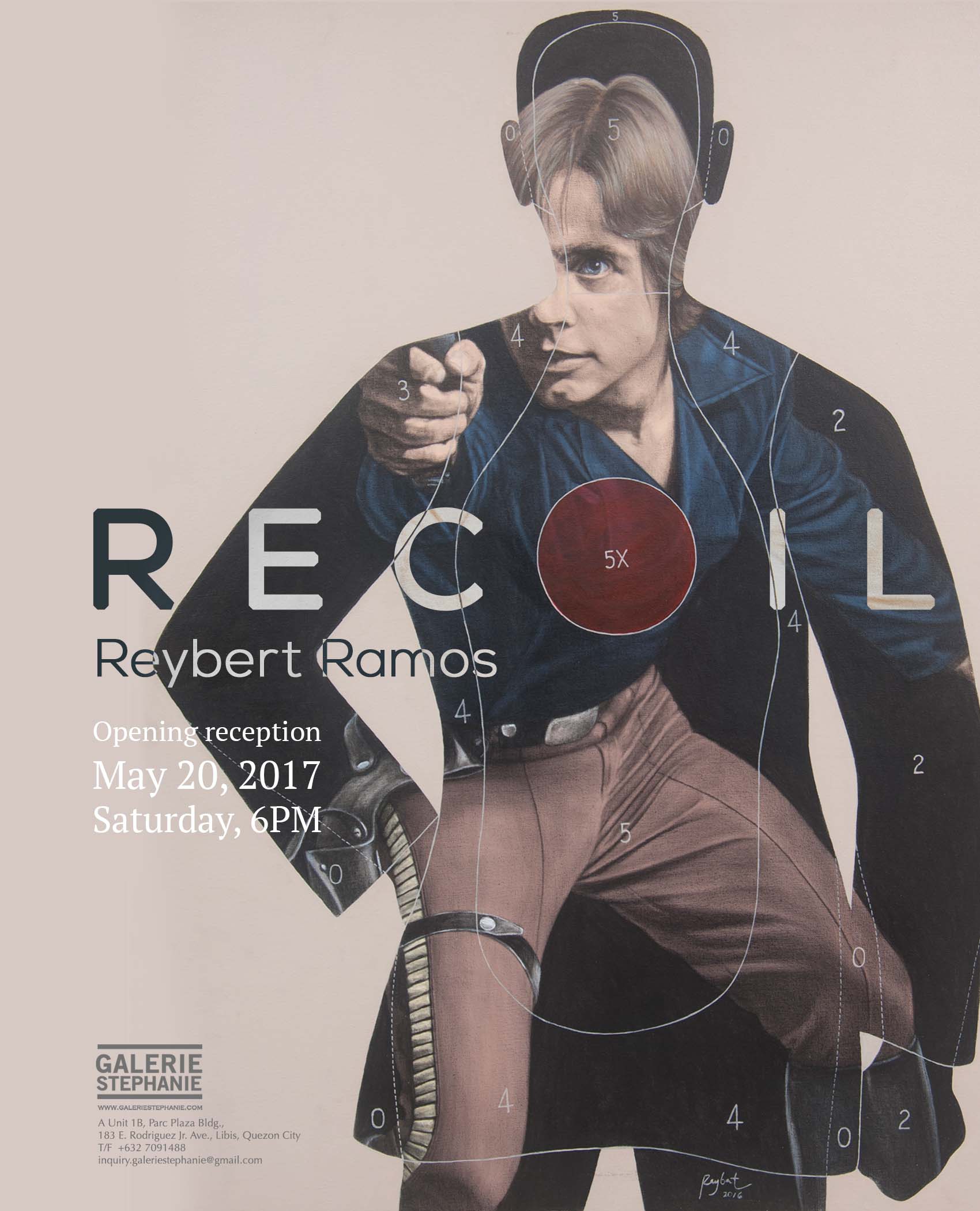 RECOIL: A Self Impact

In Abraham Maslow’s famous hierarchy of needs, self-actualization lands as the highest necessity for any individual. This need rises as the realization of one’s true self, the recognition of one’s absolute being and the living thereof. It portrays the completion of an identity and its existence, and how it is maintained to be as such.

However, in this essence, we question how “absolute” this self-actualization can really be, and how important it is on a holistic concept. The recent generations have no problem vocalizing their identities having the privilege of mass expression thanks to the booming social media culture. Conversely, we come to dissect the value of an identity, what it means to have one’s own, and the avenues that lead to its attainment.

There is also a large question that individuals tend to oversee—where do these identities come from? Oftentimes, humans only recognize them once they are idealized in one’s self or reflected upon a certain label that can either be politically, socially, and economically understood (i.e. reformist, transgender, middle class.) However, a great part of what influences an identity is usually overlooked. The totality of the “being” overshadows “how it comes to be” and sometimes the foundation of individuals come to identify themselves is more valuable than the identity itself.

Answering this question, accompanied by a prevailing power of mass media, is at the center of the target in Reybert Ramos’ fourth solo exhibition entitled “Recoil.”

Paradox and Irony of Realities

It is already basic knowledge that most of society’s beliefs are shaped by the power of information distributed by the power of mass media. Empowered even more by the rapid globalization of social media, the dissemination of views and news absorb most individuals today. Even if we remove its context, the power of media is still an undisputable avenue of influence. Film, for instance, has its own undeniable effect on people. Back in the late 19th century when Thomas Edison merely experimented on his “movies”, people were already enthralled by the idea of a motion picture. What more when radical gunslingers and charismatic saviors began to dominate the silver screen. People began idolizing them, envisioning a similar life of adventure and excitement.

In short, people began idealizing themselves as the fictional heroes they see on screen. Their standard of “being” were shaped by the characteristics that were drawn out of the minds of writers and directors. They became, in their accord, their own glorified protagonist.

Identifying one’s self with a fictional character is the very core of the narrative media. They strive on how relatable they are and how their adventures appeal to the general public. Such intentions, when met, spruce the vicariousness of thought; and such lead to looking at one’s self as another. This is the idea that graces the works of Ramos. It plays with the idea of reflective gratification—are these fanatics who look up to these figments of fiction aware of how less of themselves they really become even when they pattern their lives and philosophies with other’s?

On another note, Recoil also treads on two roads—paradoxical and ironic. It is paradoxical when the audience of his artworks are imitators of lifestyles and fully acknowledge themselves as a “secondary identity”—that their real self is to be another. Meanwhile, it is ironic when one considers one’s true self as the mere reflection of a character and nothing more—that they are themselves but of another being.

This philosophical mindgame entertains the content of Ramos’ show. With famous film characters like James Bond, Indiana Jones, and The Man With No Name, situated within a noticeable outline of shooting targets, he aims to have his viewers answer why people relate to these characters more than they do with real people.

Ramos, however, was not the first social-realist artist to tackle such question. Some artists have already superimposed the Filipinos (or the “public”) in attacking the human condition or the status quo. Antipas Delotavo, for instance, painted “Itak sa Puso ni Mang Juan” in 1978 to condensate the capitalization of American goods in our native soil by portraying the recognizable Coca-Cola logo’s tail serif as a dagger about to pierce the heart of one lanky Mang Juan. Gustave Courbet also painted himself in “The Painter’s Studio” amidst an audience of contrasting classes to depict that society’s notion on human value is flawed. In recent years also, Mideo Cruz made a highly controversial statement on the kind of “worship” Filipinos practice in his “Poleteismo” sculpture. Despite not being the first to raise a question, Ramos relies on his signature strategy of subtle yet powerful interrogations in acrylic and graphite. His art is not the type to hail bullets on the “enemy”, however, in a rather unorthodox manner, he hands them a gun loaded with questions, and with every shot fired, the recoil is the answer they get. And perhaps, the most important one yet.

With twenty artworks to support this philosophical attack, Ramos again leaves his audience with the thirst of a story about to be discovered that lurk in the eyes of Jackie Chan, Fernando Poe Jr., Bruce Lee, and Harrison Ford among others, who are trapped in the bullseye of classical hero-worship. Are these the people we aim to be?

Reybert Ramos socio-political adversaries and curiosities were shaped by his education at the University of the Philippines, Diliman. This was then geared by his talent of the arts, which was further honed through his practice of fine arts. His first solo show held at Galerie Stephanie was already a testament of his skills an artist, having been sold out. After two solo shows and numerous group shows, Ramos expanded his collector base on an international scope by staging his first solo exhibition at Art Stage Singapore 2016. His show there, “Interstices”, which garnered several rave reviews, is similar to his body of work that resembles superimposed characters seemingly wearing cloaks of intrigue and peculiarity. Aside from the superimpositions, his oeuvre also popularly consists of human-canine hybrids that are neither grotesque nor superficial. These hybrids denote the domestication and the visions of humans as intelligent beasts.

Ramos keeps himself active in the art industry despite having to work as an artistic director at GMA Network—a job he has been maintaining for more than a decade. This fourth solo show is a continuing showcase of his growing skill and perspective as an artist, creating important realms for relevant issues for humanity expressed by the vibrancy and diversity of his art.

“Recoil” will hold its opening reception on May 20, 2017, 6PM at Galerie Stephanie, which is located at Unit 1B Parc Plaza Building, 183 E. Rodriguez Jr. Ave., Libis, Quezon City. The exhibit will be on view until June 3. For inquiries please call (+63) 709 1488 or email inquiry.galeriestephanie@gmail.com. 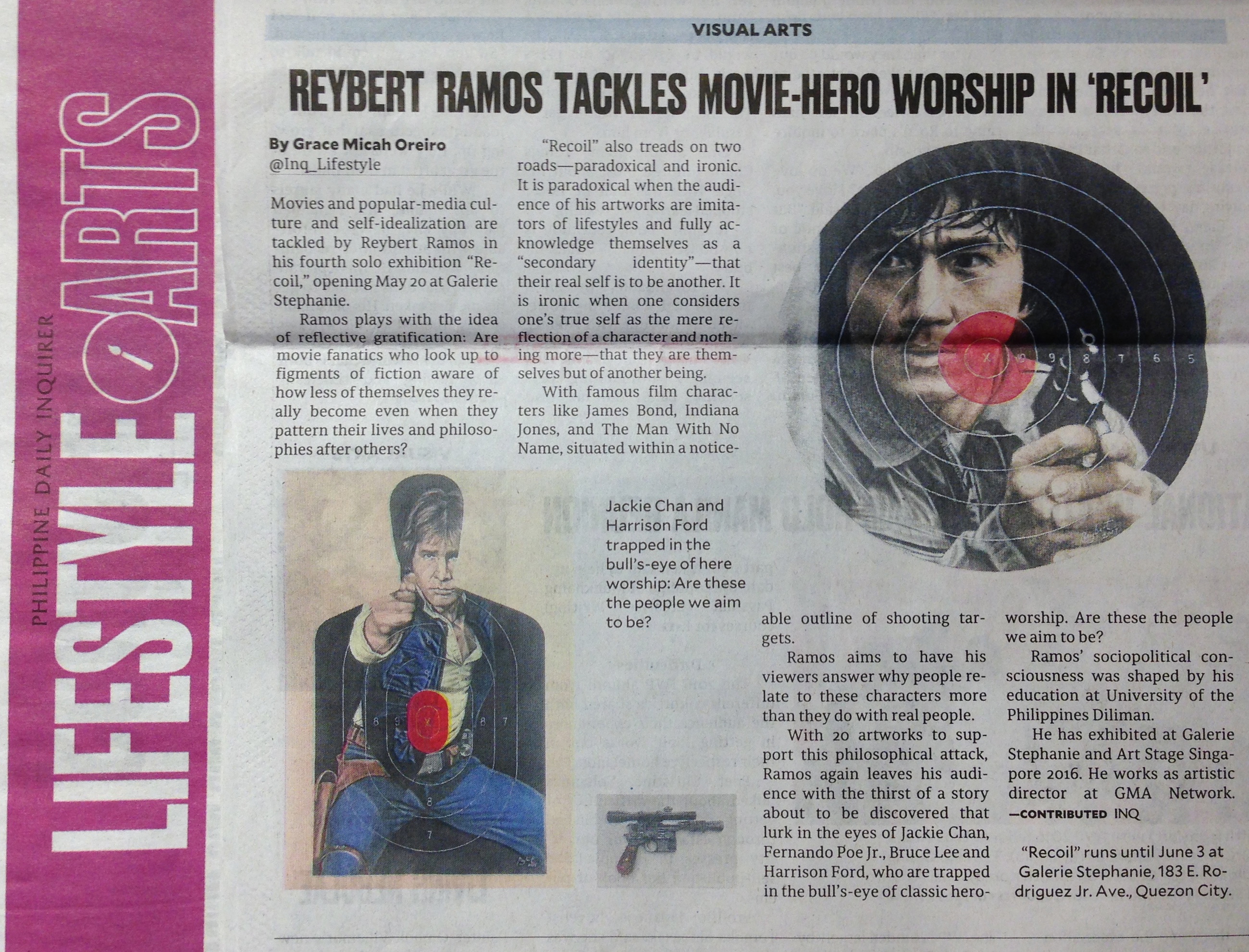 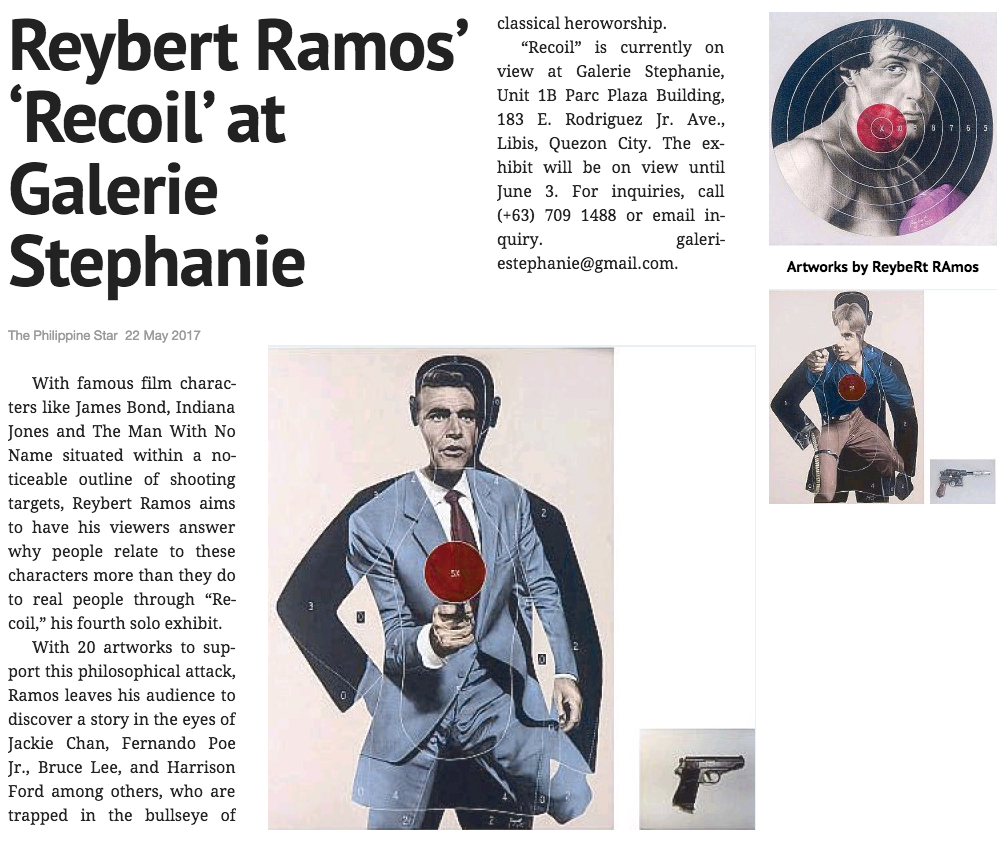