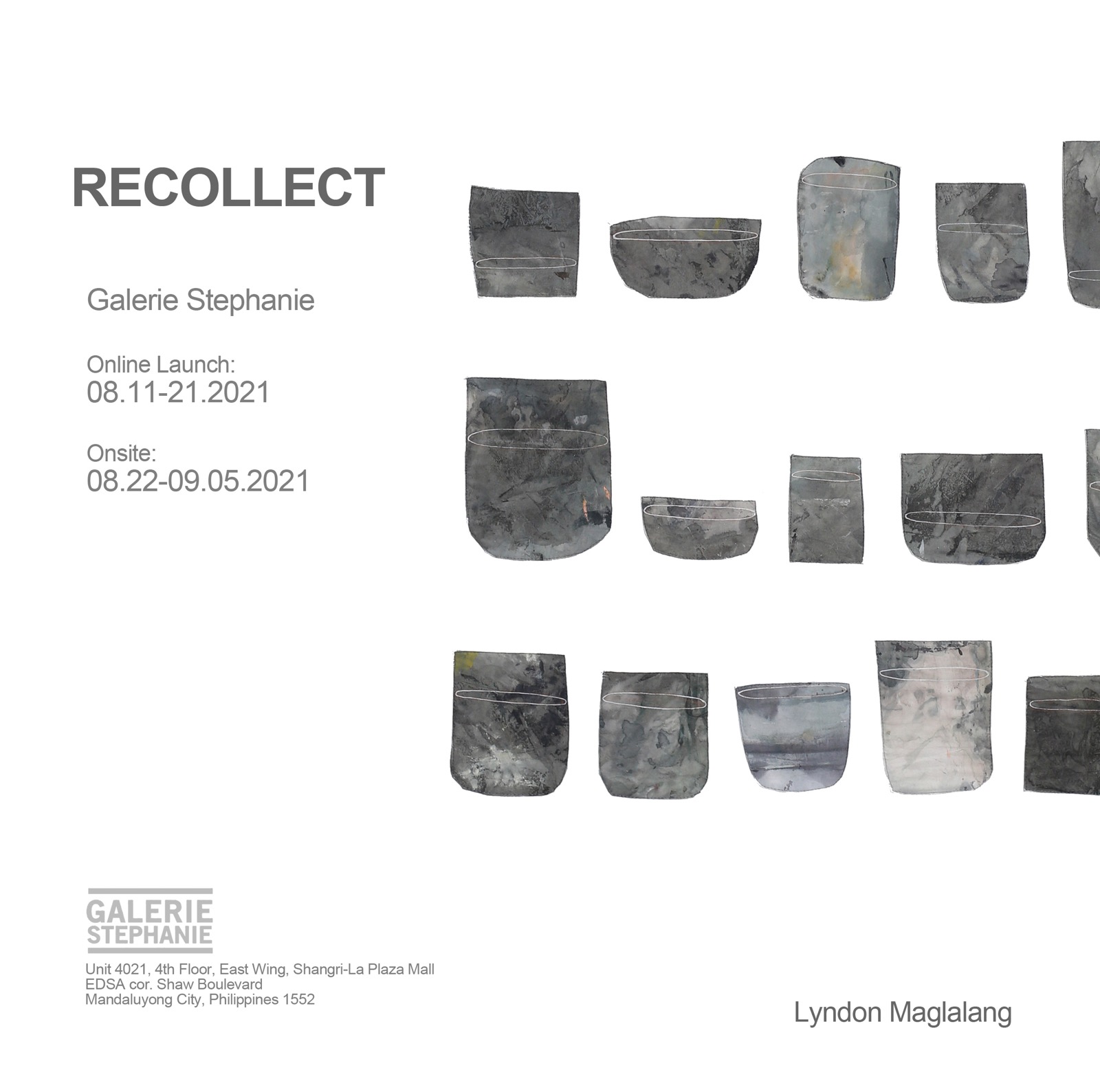 In the paintings of Lyndon Maglalang, stillness is the outcome of a peerless investigation. For “Recollect,” the artist continues his ego-less speculation into radically anti-subjective, core truths. The results are vast landscapes, either inhabited or traveled, sectioned off by delicate, ridged lines, and intimate scenes of similarly serene, tepid atmospheres. The figures beholden to these scenes, often human silhouettes, come to reflect the experiences they are beholden to—and literally, too. To keep with the artist’s privileged symbol of the container is to uphold the aesthetics put forward by the ancient Greek stoics: for a full, embodied experience, one must first be emptied of its prior contents.

To recollect here is, in short, a profound meditation on taking stock. Revelations come unbidden to these figures, if at all. Put into focus for us viewers is what appears to be a constant negotiation and renegotiation of terms, the abiding sense of grand statements whittling away. Hinted is a logic that continues to evaporate in the perduring silence of these scenes. The impression retained in “Mull” and the diptychs “Review” and “Recollect: In Search of Tolerance,” in particular, is that of engagement, rather than the answers that arise from it or fall away.

It is perhaps for this reason that the artist’s hard work seems to lie, almost exclusively, in committing one’s strokes to canvas. Maglalang’s practice resembles a sort of ascetic regimen: ritualistic, rigorous, and repetitive, devoid of visual non-sequiturs; fashioned from it is a technique with an equivalent number of constraints.

Perhaps, too, this transmits to the viewing. One feels choiceless to view the works, as if caught in a daze. The effect is profound inarticulation: each painting halts thought mid-sentence, the remainders of which as penetrating and as friable as a phrase. In this sense, Maglalang arrives at conclusions like a poet: without avidity, and in waves.

It is always the reminders that Lyndon Maglalang looks back upon.

In his latest exhibition entitled Recollect, he brings his audience back to the roots of how things have come to be, and shows the potential paths they may take. He speaks about his learnings in his artistic and personal journey, about acceptance of the various hurdles along the way, and about how being focused on the goal always gives value to the hard work that it takes to accomplish something. He emphasizes on trying to take everything as it is, in all its up and downs, and graciously digest the lessons that each moment brings.

His series of works borrows from a concept that he has used before which are containers. He said that these are symbols that reminds him to always look back on the simple things, they signify a position where one can begin something and push them to various possibilities, and they also show an end of sorts; like when a goal has been settled. His other works invite his audience to explore in gentle contemplation with still images that invoke a sense of serenity while others opens up a conversation on the ways life brings upon an element of surprise to the journey that each of us takes. His process of utilizing materials that are meant to be thrown away gives his works another dimension that again reflects back to his initial concept of starting from the roots. It is both a unique artistic choice and a reverential gesture towards his materials and shows a very deep appreciation for the smaller things.