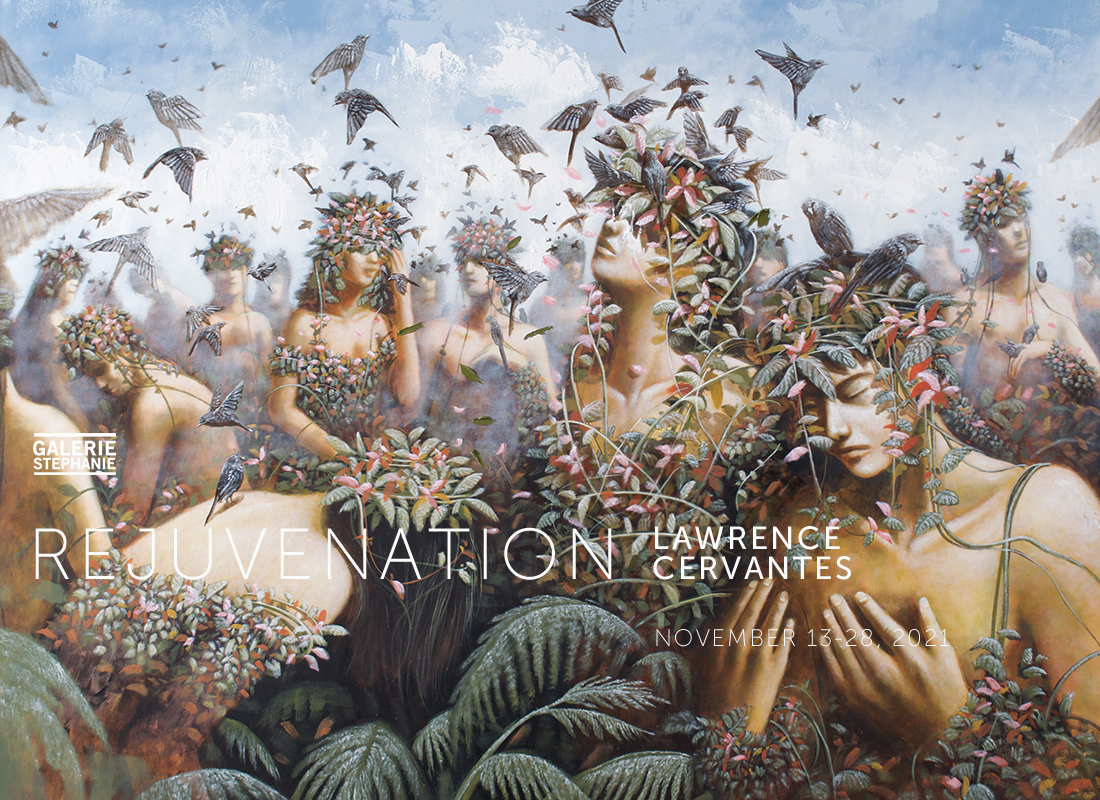 Man only knows himself in so far as he knows the world, becoming aware of it only in himself and of himself only within it. Every new object well contemplated unlocks a new organ within ourselves.

– Goethe, “Significant Help Given by an Ingenious Turn of Phrase”

There is distinct luminosity in Lawrence Cervantes’ new series of paintings. Some of his subjects’ heads are poised upwards in surrender, some depicting celestial anticipation; their accompanying details dynamically caught mid-burst. Seemingly thriving in abundance, the artist’s formerly muted greens are now tinged with vibrance.

Anchored in these elements, Lawrence returns to Galerie Stephanie with his latest solo exhibition titled “Rejuvenation”. Tying his spiritual knowledge to the knowledge of the world, he narrates the cycle of destruction to restoration–an integral continuation from his past solo shows “Origins”, “Take Over”, and “Reset”. In these undertakings, Lawrence’s otherworldly figures appear restricted and bound by the spaces they inhabit, the despondent atmosphere enveloping his canvases, mirroring society’s present conditions. Traces of previous elements are still seen in his new pieces–however, by imbuing light on his palette, Lawrence brings to the fore uninhibited new beginnings.

Rejuvenation is not a visual denouement; but rather, a revelation of Lawrence’s complex relationship to spirituality, a constant exploration and negotiation of his belief system. Lawrence is intimately aware of the crucial time we live in, as he carries on to portray non-linear narratives–his ethereal worlds between beginnings and endings. Vestiges of his religious exposure are evident in the works “Eve of Nature”, “The Wind In The Sky”, and “The Wind Blows”. “They will soar on wings like eagles; they will run and not grow weary, they will walk and not be faint” [1] , as vividly inscribed in scripture. Meanwhile, the central piece, “Rejuvenate”, embodies the exhibition’s raison d’être, delineating a communal restoration to the bounty and beauty of nature. Consisting of predominantly female figures, they show varying states of submission, awe, and vulnerability–all taking solace in the virtue of hope. For the artist, hope takes faith in the known and unperceived.

Breathing vigor and life on his formerly somber palette, the twenty artworks humbly presented in Rejuvenation depict Lawrences’ subjects’ rituals and reflective reverence. The works compel us to examine the vignettes presented. “Am I included in these scenarios? Who am I in this picture?” Acting as a reprieve from our universal desire to seek clarity, the exhibition presents a breather amidst a world beyond our limited understanding.