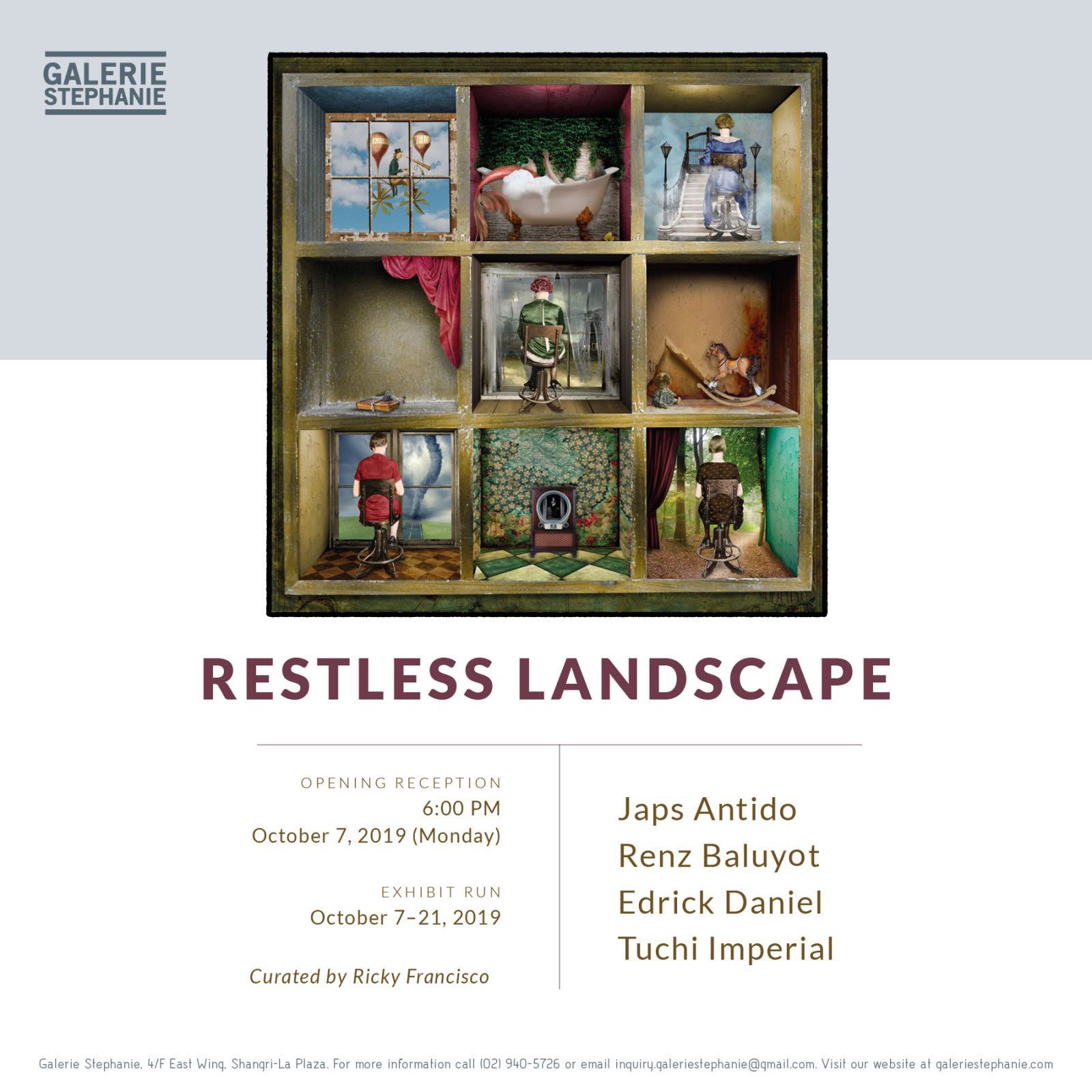 Aviator Charles Lindbergh was once quoted to have said “Life is like a landscape. You live in the midst of it but can describe it only from the vantage point of distance.” The trick though is that the distance is almost always recast as new experiences shape our points of view and put our values to the test. The Restless Landscape takes this conjecture to heart. Four artists of different artistic styles and artistic points of departure created works from this theme, and put this notion within the confines of their works.

Japs Antido is known for his works that use bright colors, impasto, and figures that are in the midst of a journey. Highly narrative, his works have expanded from easel paintings to include books and murals.  Traversing the landscape through boat, plane, and flight, his Voyager pieces have a compass at the background and elements which hint at context and destination.

Renz Baluyot’s oeuvre is concerned with socio-political narratives critical of the abuse of power and the unjust distribution of resources in Philippine society. Many of his works use urban decay as both motif and metaphor. His two works juxtapose heavy, static, rusting iron structures against the ever-changing but ever constant expanse of sky. The pristine sky acts as foil to the earthbound, decaying structures evoking themes of freedom and restriction, boundedness and expansion.

Edrick Daniel works on both traditional painting media and paint over layers of clear resin. His images are surreal, and often refer to the inscape of emotion. For this exhibit, he uses a disproportionately large boy confined in a house that has become too small for him. He holds a toy airplane. His feet are unusually large. The landscape confines the figure who seems to have outgrown his surroundings.

Tuchi Imperial uses found archival images juxtaposed to create surreal contexts and impossibilities. Her works derive from both personal narratives, and from the instinctive creation. Trained as a photographer, her compositions are a departure from the photography that documents what is in front of her. Her works for this exhibit bring the viewer to what is within.

The Restless Landscape alludes to the creative power of us as authors of our lives. Though constraints seem abundant, the art of the way we recollect and share our lives enable us to transcend our limitations.