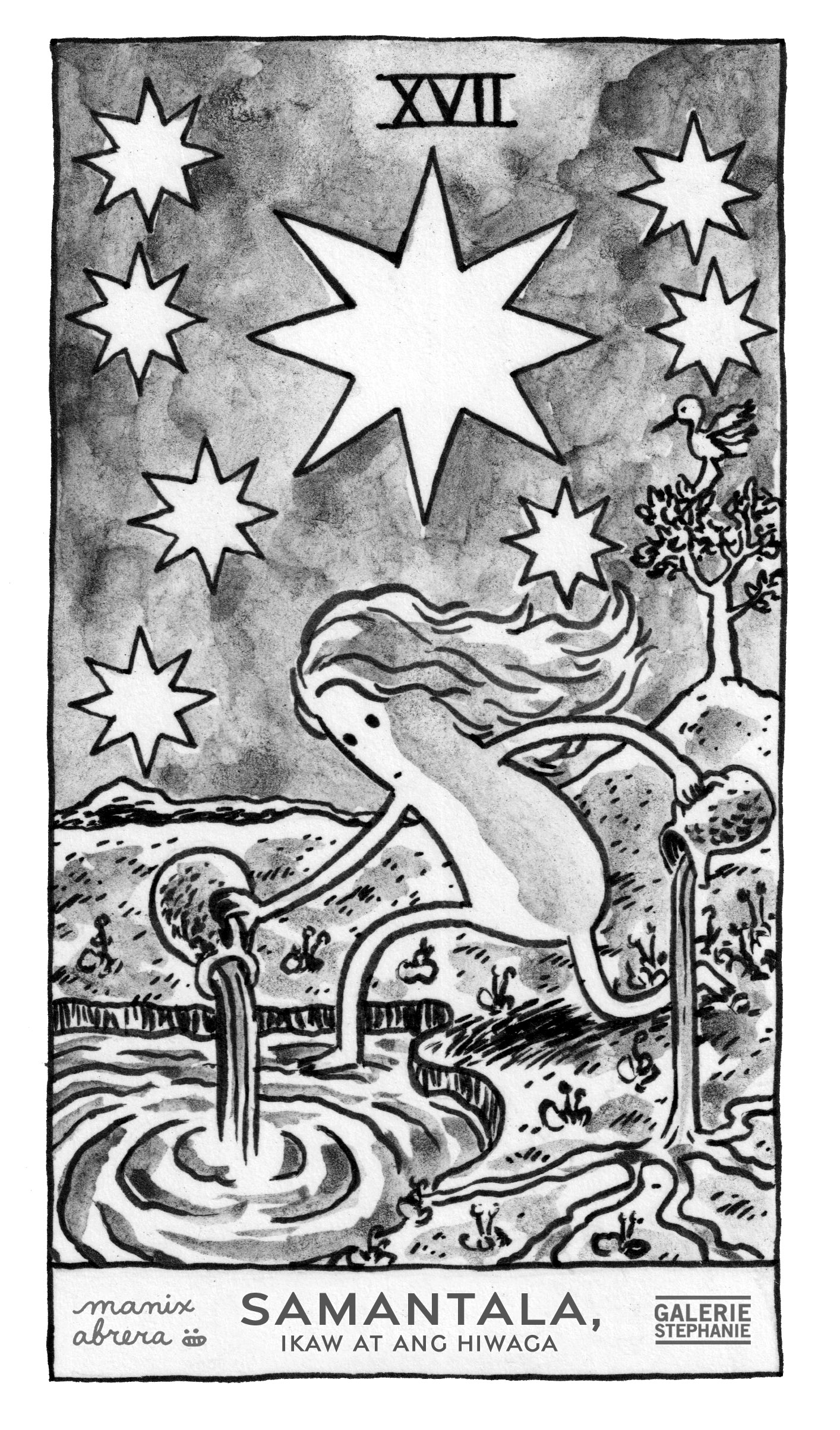 Witty, spirited, and with a fair dose of mischief, this generous offering by Manix Abrera sees the comics industry giant handle the symbolic and its narratives – the imprecations of the tarot, the grandeur of planets, and a series of scenes that drip melancholy – with a wry, sometimes wicked glee. In his familiar good humor, the human dramas that play out are, quite literally, belittled, made small as with the works’ sizes. It is almost as if Abrera presents an ode to smallness, and the wit such short forms allow. Here, moments become mementos. Archetypes take front and center. Here are snippets done another way, but nevertheless stitch together the manifold aspects of everyday public life.

To say nothing yet of Abrera’s trademark lightness, his ability to subtract the weight from the matter and still have his illustrations jump off the page, to let these droll a little. There was a time when tarot cards were regarded as little more than party tricks; as the predecessor of the modern playing cards, they were once used idly, casually, for games, not to divine fate. And in Abrera’s trenchant renderings of the major and minor arcana, the touch of satire rescues that ground for play. His tarot assumes a world where even (or, rather, most especially) figures of authority appear clueless, dupes to their positions in fortune’s wheel; the characters in general appear pensive or absorbed in their actions; as if to insist that meaning can come, too, from the absurd.

Or that the absurd can be wondrously laughable. Presented is a world drawn in the artist’s charming, soft-curve, thick-line style that has this particular kind of jollity to prevail, directing even the direst circumstances to resemble the dailiness of life Abrera never once failed to champion as wild, riotous, and hardcore.

As if destined to write our fate, Manix Abrera illustrates it out instead with carefully drawn and painted tiny masterpieces in his upcoming solo, “Samantala, Ikaw at ang Hiwaga” showing at Galerie Stephanie on April 14, 2021.

Manix Abrera, award-winning cartoonist and creator of Kikomachine Komix (his long-running daily strip for the Inquirer), brings us closer to the realms of magic and divination and eventually, closer to ourselves in his sixth solo exhibition (fourth with Galerie Stephanie). “Samantala, Ikaw at ang Hiwaga” features 91 art pieces, each carrying a story of its own and at the same time, meaningfully intertwined with a grand story in totality.

Inspired by the Hermetic axiom fundamental to any magical practice, “as above, so below”, Manix plays around the macrocosm-microcosm analogy that the verse refers to. There are indeed similarities in the makros kosmos or “the great world” – the whole universe as a whole, perceived as a great living being, and the mikros kosmos or “the small world” – the human being, our self, understood as a miniature universe. The artistic genius thought the best way to interpret all of these ideas is through the tarot, which is believed to be an entire universe by itself, encompassing all life events, depicting stories that everyone has undergone through.

The exhibit highlights Manix’s own version of the popular 78-piece Rider-Waite-Smith deck. Manix admits he has always been fascinated with the tarot because of its mysticism and the many symbols with hidden meanings, fueling his imagination. He aimed to illustrate all the characters in his distinct cartoon style where the human figure consists of just eyes, the mouth and an outline body, because he feels that the less detailed human subject makes his drawings more relatable to anyone. He adds that the viewer should take note and observe the subtle facial expressions of the characters on the tarot, which he diligently focused on to precisely convey the emotions they express.

The tarot may seem intimidating to many, but Manix hopes through his unique style of drawing and storytelling, he can bring these spheres of the supernatural closer and more accessible. No prior knowledge to tarot reading is required, and he advises us to simply enjoy reading them like comics, get lost within these art pieces and ultimately channel our higher self to decipher the mystery they bring, individually and as a whole sequence. When asked about his top favorites from the deck, Manix excitedly describes, from the Major Arcana: “The High Priestess” – resonates with his creative spirit, “The Fool” – reflects a higher state of mind he hopes to achieve, and “The Magician” – because he believes everyone has their own kind of magic. The Major Arcana are the trump cards of a tarot pack, considered to bring powerful messages, symbolizing great milestones and distinctive moments of transformations in life. The Minor Arcana, on the other hand, are the suit cards which reflect day-to-day matters, suggesting gentle transitions and temporary phases that one goes through. For the Minor Arcana, Manix names the “3 of Wands”, “8 of Cups”, and “7 of Cups” his top three. The “3 of Wands” is extra special for him because this is the first card that he ever made. It is his starting point, the topmost card on the unshuffled deck; to which he spent an ample amount of time pondering on how to achieve the perfect balance of his own drawing style and Smith’s original illustrations, thereby setting the tone for the whole project.

Consistently a crowd-drawer in comic conventions, Manix is well-loved because of the unhurried time he spends with every person asking for his autograph. In a similar way for this exhibit, he patiently took his time drawing each piece of the tarot, saying that each small card, measuring only 4 x 2.3 inches (not even bigger than your hand), takes about 2 hours to finish. He worked on the whole tarot for almost five months, leaving just a few weeks for the other pieces that he planned to include in the exhibit. Completing the show are a total of serendipitously thirteen other even smaller artworks (3 x 2 inches) in the order he created it – “Melencolia Komix”; “Pagkakasundo”; the “Cosmos” and the seven classical planets: Soleil, Lune, Mars, Mercure, Jupiter, Venus and Saturn; “Sanib”; “Baka Sakali”; and a 3-piece set, “Ssshhh”. Manix humbly discloses that he failed to finish one set of artworks supposedly depicting the zodiac, because of the time constraint. (We’ll definitely look forward to that, some other time!)

The thirteen-piece set of original drawings making up “Melencolia Komix” was inspired by one of Manix’s favorite artworks, Melencolia I, by Albrecht Durer in 1514. This engraving has many symbols, mostly alluding to knowledge and magic, and Manix chose to interpret the striking elements which he resonated with through a silent comics form. One may ask, why thirteen? Manix admits that 13 is often associated with bad luck, he even avoided this number in his two best-selling graphic novels, “12” and “14”. But in the world of magic and ancient cultures, 13 has a symbolic (and even sacred) meaning, Manix emphasizes. Even the 13th card of the Major Arcana is Death, but it doesn’t mean a physical death. It actually symbolizes a final end to something in order to bring in new beginnings.

Pagkakasundo” is Manix’s version of the magical Seal of Solomon, which is a hexagram shaped symbol on King Solomon’s ring believed to be engraved by God, granting him powers to command good and evil spirits. “Sanib” is Manix’s personal favorite, saying that it’s the art piece representing the whole collection. It is his own interpretation of the seal of Solomon, taking the form of two overlapping angels, carrying positive and negative energies, posing two highly opposite worlds but creating a Venn-like center of commonality, which according to him, holds the right mix of both worlds, that is you.

“Ssshhh” is a three-piece set showing an angel and a devil, sleeping peacefully like babies in the fetal position, amidst the steady sound of the pouring rain. Imagine the rain is a supernatural force, creating a dynamic union of the heavens above and the earth below, a medium that washes away but at the same time combines all energies, and by feeling the rain all around you, you find yourself at peace with the cosmos. Manix shares with us his love of the rain through this simple yet powerful artwork.

They say that artists must have endured decades of toil before the masterpieces finally emerge. True enough, Manix has been drawing comics for more than two decades now, but for him, he must face the challenges that came with the pandemic and the lockdown while creating the show. He usually conceptualizes and draws outside (coffee shops, parks, etc.) where various elements instantly trigger his imagination in building stories, and his artistic output is accomplished immediately. Imagine how much creative energy Manix must have mustered up in drawing the majority of this work while locked down in the metro. From conceptualizing the show to sealing the final artworks in boxes to be sent to the gallery, Manix barely had the chance to leisurely draw outside, prompting him to experience a very intimate communion with his self and his mind’s eye, trying to see past the same window every day. And the results? Well, no less than this magnificent ouvre, which focused on the self and the mystery inside all of us. “If I did this pre-Covid, the artworks and overall theme must have been different because with this one, I focused on the self and the supernatural, topics really close to me, but couldn’t totally express in my comics,” Manix says.

Manix’s art pieces in “Samantala, Ikaw at ang Hiwaga” may be extremely tiny compared to huge masterpieces that can occupy a whole room such as Rembrandt’s The Night Watch at the Rijksmuseum or Veronese’s The Wedding Feast at Cana at the Louvre, but the power Manix’s tiny pieces bring forth can be limitless and even bigger than your imagination. These pieces are tantamount to cathedrals of beauty, so allow them to speak to you and occupy your heart, mind and spirit. Yet small, they reveal the great big mysteries of your past, present and future, of which only you can imagine and know. Let Manix’s new collection guide you to discovering yourself anew, unlocking the power within you to recognize and fathom the multitude of big and small universes, ephemeral or eternal, within you and around you, as above, so below.