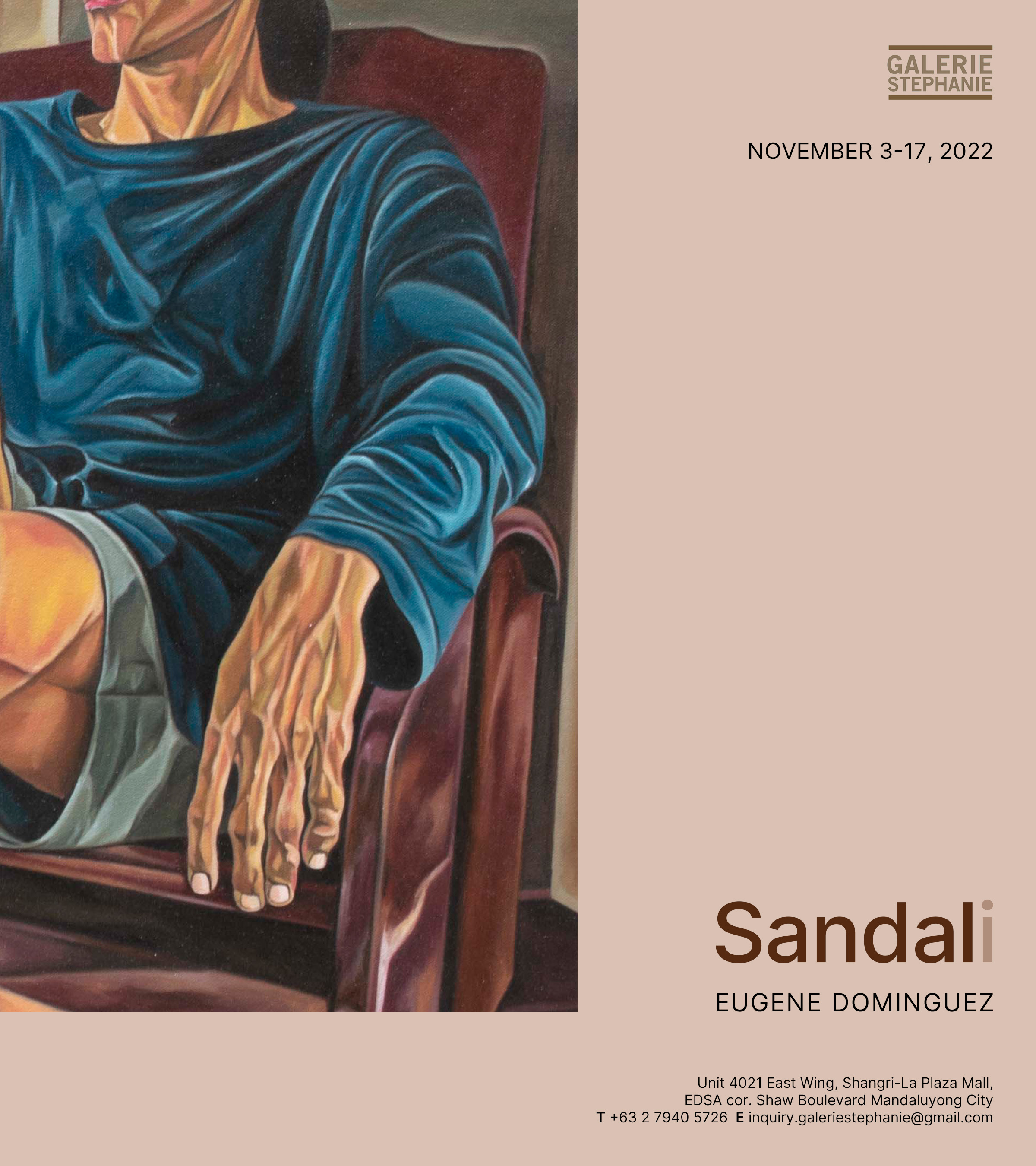 The sun is setting and the shadows are long, sustained and elongated. The dishes on the counter wait, stacked and still, and even the shadows it casts maintain an enduring pause. Perhaps later, it shall be rinsed accompanied by the familiar rhythm of the clinks and clangs of dishwashing. Yet for now, the chore shall be set aside. Light and shadow tell us the day is long and the sun takes it time to set. Because umbras and penumbras tell us much about time and how it is passed, it is just natural that artist Eugene Dominguez‘s works play with light and dark.

Sandali—one moment, a wait, a slight pause, to be still in a rush of motion. Eugene Dominguez‘s Sandali at Galerie Stephanie is a continuation of the artist’s first solo show Papag from earlier this year.  In Sandali, he once again explores the human figure occupying an intimate, domicile space at pause and rest.  For this solo exhibition, Dominguez returns with painting with more acuity—the lines are sharper, the color palette is commanded with vividness and control and everything is settled into balanced focus.

While some rely on searching for creativity to be spurred in the far and wide he takes his immediate surroundings as force and inspiration behind his paintings.  Dominguez hails from Binangonan, Rizal. Not far from the municipality is the town of Angono, where for decades land and people have established itself as artistic hub which has cultivated the talent of a continuously growing community of artists.  Each brushstroke is a careful homage to familial champions. His work is intimate, set in domicile environs, and he needs only to cast his eye and peripheries on family and community to find impetus to create.

A survey of Dominguez’s work reveal a consistent depiction of subjects at the hour of rest. Slumped, sitting, napping and sleeping, sometimes they are on mattresses, sometimes on chairs or bamboo benches. In poetry, sleep is depicted as the period  of respite for the weary and an hour to relieve one’s sorrows. In art history, sleep depicts the subject in their most vulnerable, an exposed torso open for attack, guard completely down. In Dominguez’s work it is an hard-earned respite and an intermission in a life which rolls and toils unceasingly onward.

Light is filtered through a singular, spare window framing the outer environs and functioning as aperture in illuminating figure, object and space in an ambiguously amber light. It is not daybreak, noontide nor the hour of the vesper’s bells. Folds, wooden furniture and muscle are rendered in sharp detail and furnished with high contrast, efforts which divulge that time was taken and spent to lovingly paint each and every crease, sinew and grain. Across the pictorial spaces of the diptyches featured in Sandali, the depths of the pthalo blues, the hints of vermillion in the subtle corals and the greens the shade of desaturated olives show Dominguez’ skill and command over medium and color. He knows which blue goes with what red, which tone and chroma would amplify the other. Limbs and torsos  are long, veined and  sinewed and slathered in warm vermillion highlights. The scenes impart a partially voyeuristic gaze—however can we stare without disturbing Dominguez’ subjects from their transfixed moment of pause? He has an awareness that to paint, and to do it with sensitivity and accomplishment, he must understand the people around him. Through his canvases, Dominguez is rebelling against and countering the race of life by celebrating the simple, albeit significant moments of pause. Time is owned by the subject, and they hurry for no one for in the end, there is nothing that cannot wait.

As viewers of Dominguez’s work we witness snippets of people in intimate states of vulnerability—slumped and relaxed postures paired with intellects taking a well deserved pause to collect and reinvigorate themselves.  There is bliss and joy in the tranquility of ordinary days. Pausing is now a luxury, earned and savored til its last drop, a simple felicity to luxuriate with in a world plagued with the malady of acceleration. Because in the end, there is perhaps nothing more powerful and extraordinary than a ordinary mortal man stopping time.