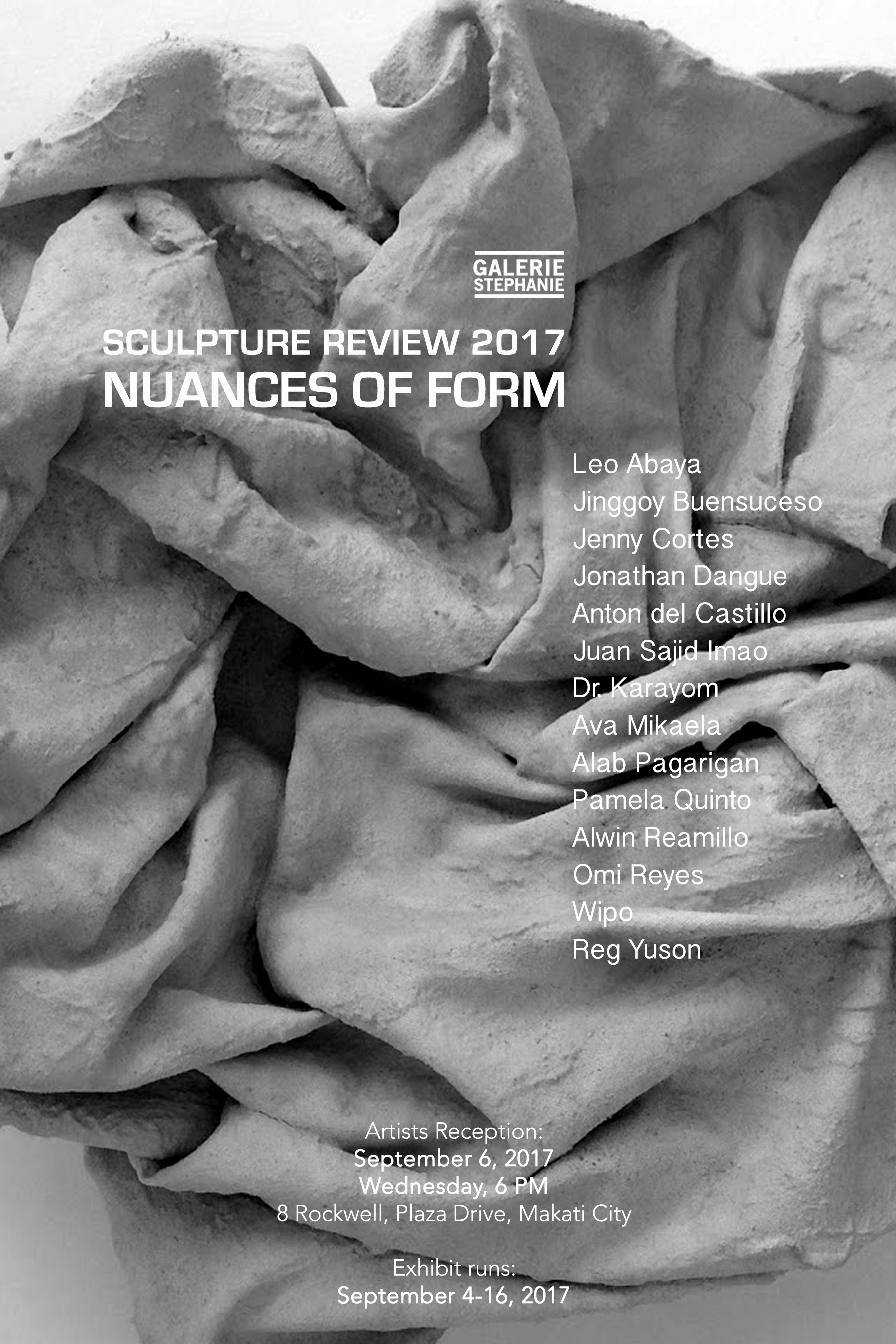 Galerie Stephanie is pleased to present “Nuances of Form,” the 3rd edition of its annual sculpture review at the lobby of 8 Rockwell from September 11 to 17, 2017. The sculpture review has been an advocacy of the gallery to highlight the practice which seems to draw less attention than painting in the amount of exhibitions and critical notice in a year. In fact, there are only two National Artists for Sculpture, where as there are ten for Painting, plus the exception of Federico Alcuaz whose award encompasses both. Abby Frias Teotico, the gallery director, notes that despite less attention given by art collectors to sculptures, the gallery is committed to showcasing the art form as there are still artists who create them. The galleries which do have sculptures often just show certain prominent sculptors without giving a chance to new comers or to those whose styles are not currently embraced by the market. “There are only a handful of exhibitions devoted to a broad band of sculptures yearly, so Galerie Stephanie is committed to doing its part.” This year’s review, is curated by Ricky Francisco, who is the curator of Fundacion Sanso, and has headed similar initiatives to bring art to more people. He has curated the Philippine featured section of Art Kaohsiung last year, and the 25th Anniversary of the Art Walk in Megamall. Francisco says that “Many Filipinos are intimidated by art. Often, only a certain segment of the population go to museums and galleries. In my experience, bringing art to the mall exposes more people to art. And people naturally appreciate art. I often introduce some pieces which challenge accepted notions of what art is, to introduce non-museum goers to other ways of seeing reality and life.” Francisco also notes that while painting is the more popular art form, Filipinos are very tactile and are often tempted to touch art. Sculpture, being more robust and textured, generally withstands handling and the touch of the curious. For this year, the theme and title of the exhibition is “Nuances of Form.” The roster of artists includes practitioners ranging from those who do conceptual art, abstract sculpture, abstract expressionism, even steampunk. But also included are artists whose practice straddle academic traditions, found objects, street and craft, often with overlaps.

The artists, namely Leo Abaya, Jinggoy Buensuceso, Jenny Cortes, Jonathan Dangue, Juan Sajid Imao, Anton del Castillo, Dr. Karayom, Ava Mikael, Alab Pagarigan, Pamela Quinto, Alwin Reamillo, Omi Reyes, Wipo and Reg Yuson represent a cross-section of contemporary sculpture, though not representative, leaves something for everyone. Anton del Castillo’s “Hell on Earth II” is a heavy piece which looks like classical Grecian friezes. Rendered in white, cold-cast marble, it reminds people of the sculptures on the façade of the Parthenon, or the bas-relief on Trajan’s Column. There is the uncanny surprise upon closer inspection that each human figure wears the contemporary gas mask, giving us an idea of what the work is about. The dragonfly-like work of Alwin Reamillo is crafted from a piano key. “There are 88 keys on this piano which was damaged by the flood caused by Ondoy. I have given each key wings, so that they could still take flight, like when they made music which floated on air when the piano was still whole,” says Reamillo. Jonathan Dangue’s brass and wood sculpture is more abstract expressionist. Inspired by ruminations on personal events, his works often have personal titles, like this one which is called “Sa Kabila ng Lahat,” and which features a note on paper nested in a network of brass rods.   In a similar fashion, “Ink” by Jinggoy Buensuceso, celebrates the organic form created when molten metal meets cold water, and takes the shape of that brief but powerful encounter. New comer Ava Mikael breaks into the scene with a sewn fabric sculpture which she describes as “questions transformed into form that are both ‘soft to touch, and of the thinking heart.” Pamela Quinto’s fragile plaster work accentuates issues regarding gender and sexuality. Street artist, currently nominated for Ateneo Art Awards, Doktor Karayom submits a piece which is loaded with political insight. Wipo, on the other hand, uses a deconstructed object in the same vein. While definitely not new to the scene, steampunk artist Omi Reyes presents a rather restrained piece more reminiscent of Arturo Luz’s bas reliefs and Romulo Olazo’s diaphanous forms. “Through this selection, the public is given a preview of contemporary sculpture showcased in a relatively small area. The variety of practices gives them an idea of how wide the themes and methods are, as well as how varied the inspiration. This exhibition may seem disjointed, but it really is the idea to show how different and nuanced the forms are,” says Francisco. “We hope that more people have a greater appreciation of the art form, and the creativity of our Filipino sculptors.”

“Nuances of Form” is presented by Galerie Stephanie. The artists reception was held September 6, Wednesday, 6PM at the 8 Rockwell lobby. For inquiries, please call (+63) 709 1488 or email inquiry.galeriestephanie@gmail.com. 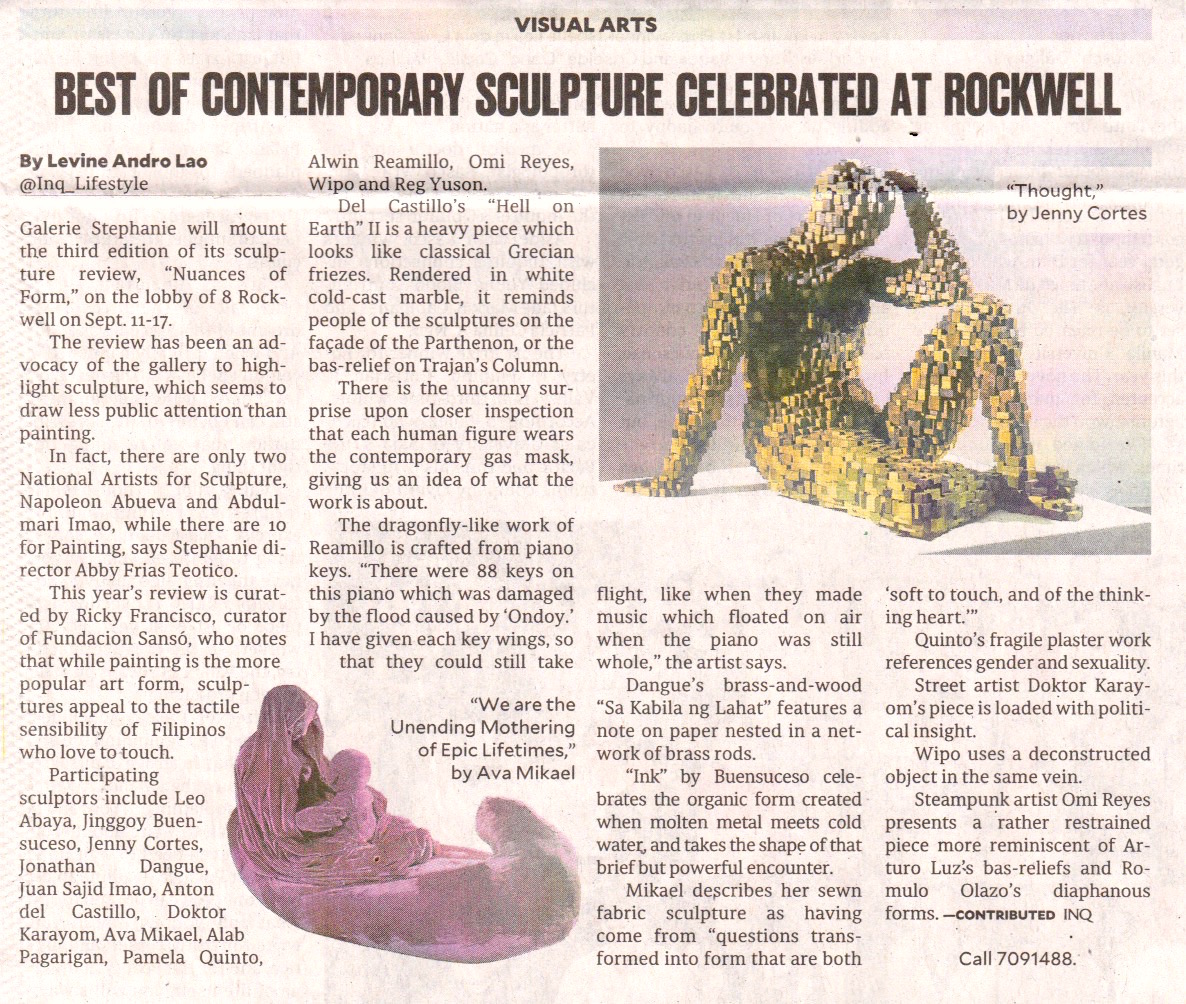 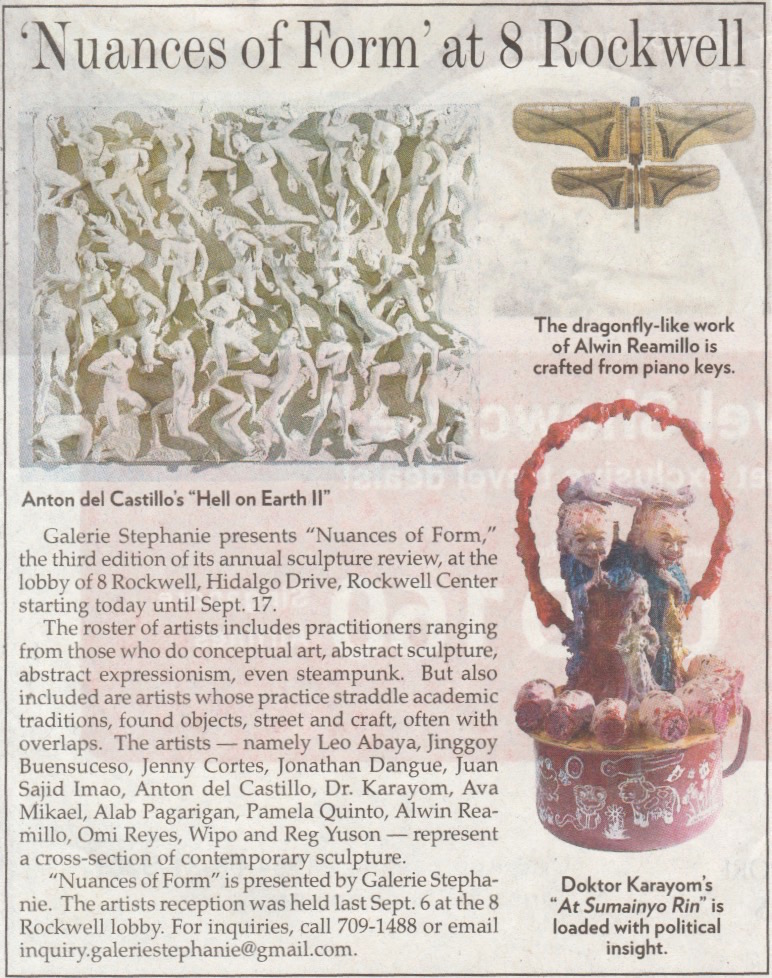 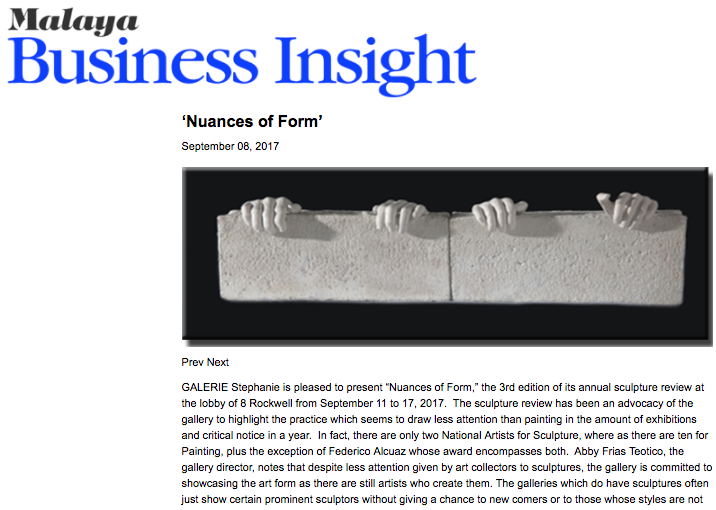