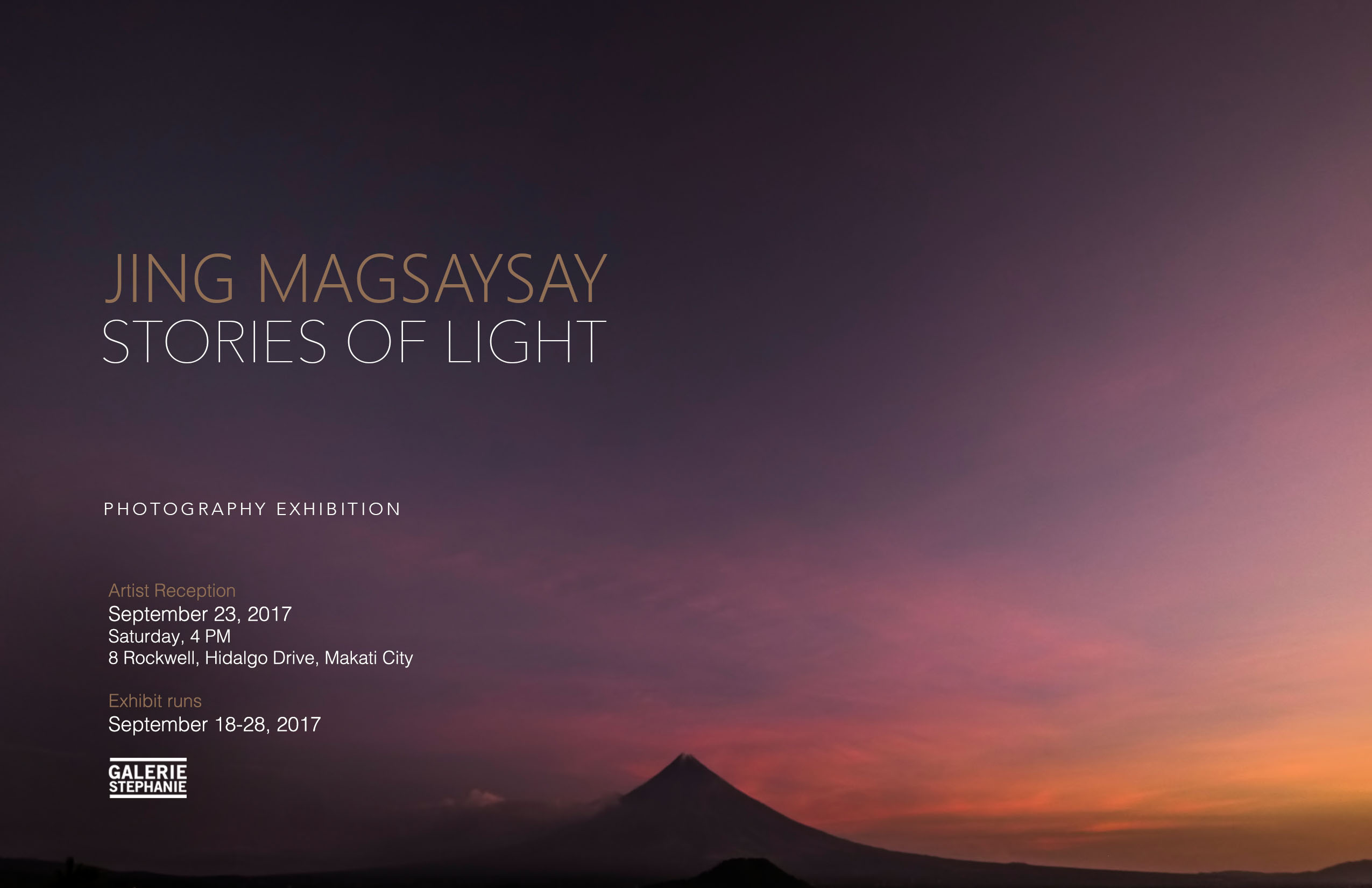 “I’ve been a storyteller all my life,” says veteran photographer and journalist Jing Magsaysay. Beginning his storied career as a radio DJ, he went on to enter the field of TV and News in 1981, working for and eventually becoming head of ABS-CBN News Channel, and later on starting what was then Solar News. Today, despite being retired from the business, his endless curiosity and thirst for new experiences has continued to bring him new adventures. His second solo photography exhibition, Stories of Light is a visual epic, a testament to Jing’s self-taught skill in telling stories through the use of life, space, and light.

Jose Cecilio Magsaysay began taking photographs with an old film Nikon when he was in high school, but he traces his origins back even further. “Growing up as a boy in what was Mandaluyong then,” he relates wistfully, “I spent a lot of time playing in the fields in front of the house. There I discovered tadpoles, dragonflies, butterflies, grasshoppers, and fish.” His childhood, largely spent outdoors, is filled with memories of making mud dams in the rainy season, burning dry grass in the summer, building secret forts, flying kites in the amihan, having kite dogfights, and playing baseball. “I can still smell the grass after it rains. I can still see small spider webs glistening with the overnight dewdrops. I can still smell suag kabayo, a plant that smells like coriander.” The beauty of life and nature, visible from the all-encompassing spectacle of the Milky Way galaxy at night down to the intricate patterns in the smallest leaf, fueled Jing’s curiosity and drive to discover novelty in the every day. It taught him to see the overlooked details obscured by the grind of routine. In seeking to record and share his visceral experiences of the world around him, Jing began what was to be a very long love affair with photography.

In crafting his particular style of landscape photography, Jing looks for powerful contrasts in light, preferring strong light and dark values that produce bold colors and textures. The sun (in resplendent yellow, vibrant orange, or crowned by a halo) and the moon (a solitary figure, being chased by the sun, or reflected off a dark sea) are Jing’s oft-used light sources; a majestic heavenly setting against which he juxtaposes the personas of his story. On the other end of the spectrum, Jing welcomes shadow just as much as he does light, setting up a poignant allegory for life’s ever-present dualities – “intensity and serenity, confusion and clarity, doubt and certainty,” emotions that are for him present during our most trying times. Each photograph contains physical and emotional worlds in themselves, regardless of whether it took a split-second or a lifetime to capture. Ironically, photographs arrest visual evidence of life’s constant changes; exposing transience by capturing a moment that can never again be perfectly replicated. In landscape photography, the poetry of water, land, clouds, and wind is inscribed into history through the help of human intervention. A singular photo captures scenery that is ostensibly constant yet is also constantly changing; Jing observes that “clouds of mist [are] enslaved by the wind and changes in atmosphere; water is drummed by far off trade winds and transcontinental currents” while land’s gentle grind cannot be witnessed by the human eye. Several of Jing’s works in this exhibition are combinations of two or more photographs – “Inspiration” features a singular bright firework against the last vestiges of a shining sunset, a field of wheat in “The Sun and the Grass” is lit from the east while a desert-gold sun sets in the west – injecting subtle touches of surreal that spark the mind’s exploration into an “alternate photographic reality.”

Stories of Light, an exhibition of 21 photographs by Jing Magsaysay continues in the grand tradition of human historiography – an intimate yet universal log of man and nature ascribed in a medium that people of any race or culture can understand. For a brief yet immortalized moment, the parallaxing perspectives of heavenly bodies, waters, lands, and man line up to join in an epic narrative. The Artist Reception of Stories of Light will be held on the 23rd of September at 4:00 in the afternoon, at Galerie Stephanie’s pop-up gallery at the Lobby of 8 Rockwell, Plaza corner Hidalgo Drive, Rockwell Center, Makati. It will be on view from the 18th to the 28th of September, 2017. For inquiries, contact the gallery through their landline at (02) 709 1488 or email them at inquiry.galeriestephanie@gmail.com. 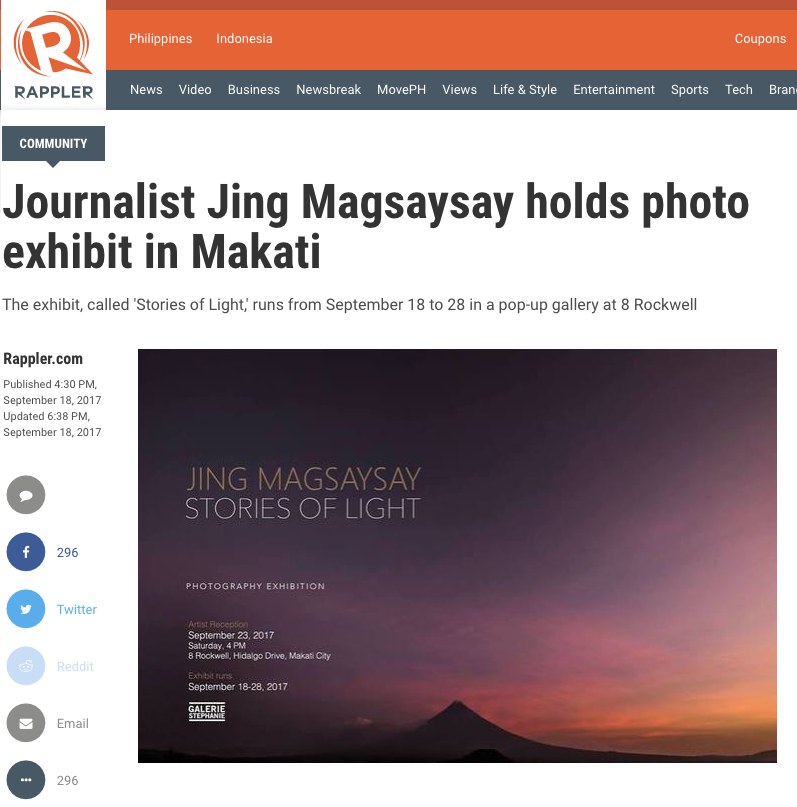