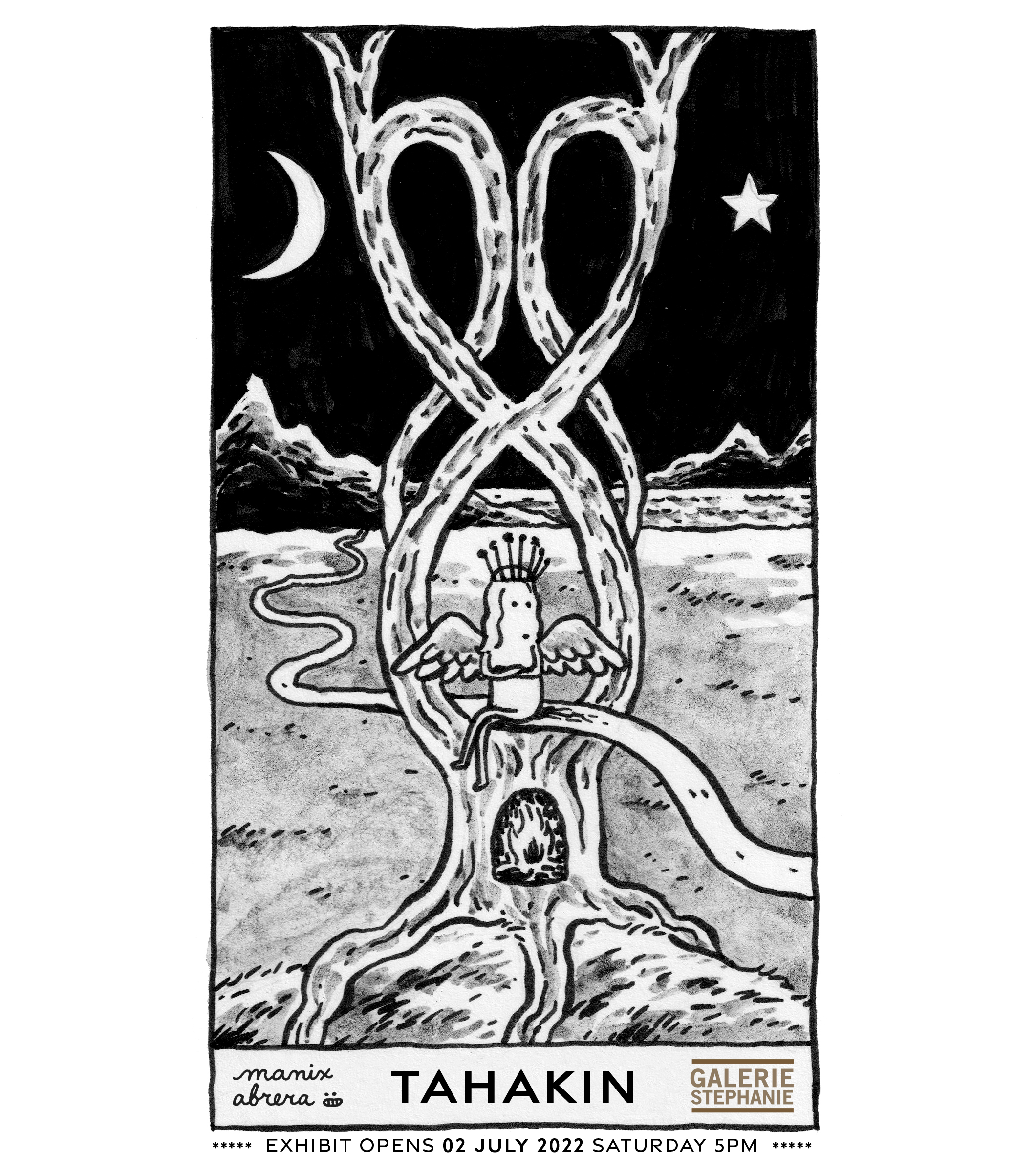 Tahakin draws on Manix Abrera’s expanding library of comic tropes and esoteric symbols in an exploration of life paths and path-making. Of sorts the spiritual successor to Samantala, Ikaw at ang Hiwaga, the works are made to resemble the tarot in shape and in their sigils, as Abrera continues to plumb the theme of travel and the manifold ways by which one’s “quest” for self-discovery may succeed or come awry. Like traditional tarot cards, some of the works of this series combine representational depictions with allegorical designations — a character crosses a chasm on a long thin wand in “Earth,” another catches falling embers with a cup in “Fire.” Notable, too, are the tarot’s familiar suits — cups, swords, wands, and pentacles — which are here let loose and ascribed anew in the artist’s own cosmic mythos. Tarot cards throughout history have been used to predict the outcomes of human affairs and foretell destinies, often reliant on both chance and the ingenuity of the reader. It is on this principle that Abrera invites his viewers to join in on this generative game.

Through illustrations of befuddled, journey-bound rogues and their inadvertent brushes with fate, detailed are some of the most salient episodes of living. In the artist’s trademark fashion, the relatable combines with the otherworldly in this charming series of what-ifs and infinite outcomes. Rife with encounters with cosmic deities and eldritch horrors, each card teems with uncertainty, is shot through with risk: a character who had walked long traces the road before him to a narrow entrance of a foreboding wood; in another work, where the beaten track disappears into the mountainside is a ladder to a floating paper ship — a shortcut.

The word “tahakin” itself connotes carving a new path, a new approach, the very tenet of creativity that Abrera, in his practice, lives by. And as with the best divinatory practices, Tahakin, whether by reading each card in isolation or several in a sequence, offers a means to gain perspective; in this case, perhaps the point-of-view of pilgrims. Just as how a fork in the road splits what is ahead between left and right, to move forward is as much about leaving the past behind as it is committing to the road that entangles, winds, stretches out, or knifes the world before you. And where it is the road and only the road that separates one from the cosmos, that vast, foreboding expanse, the hiwaga, the mystery, the abyss, Tahakin distills what is perhaps the only two states of tension from which the myriad experiences and flavors of life spring: having to choose and having chosen.

Such are the paths we often traverse through life and Manix Abrera has once
again captured the surreal reflections of one’s journey in this collection.

Taking the leap, fighting for chance,
Crossing the bridge, getting lost in the mobius,
Choices and consequences –

Manix emphasizes on the clues and elements along the way:
Pentacles represent Earth, the material world;
Cups symbolize Water, for emotions and relationships;
Wands illustrate Fire, associated with passion and purpose;
Swords denote Air, for courage and challenges.
Essentially what matters are the experiences, the learnings, and the character
you become after traveling through these paths.

“Tahakin” still is a viewer-centric offering from Manix, to open one’s mind to the
infinite possibilities of reconciling the past, realizing today, fulfilling the future; and
ultimately, discovering the right path to a better and oftentimes bigger you.
All roads lead to one, and there we shall meet again.