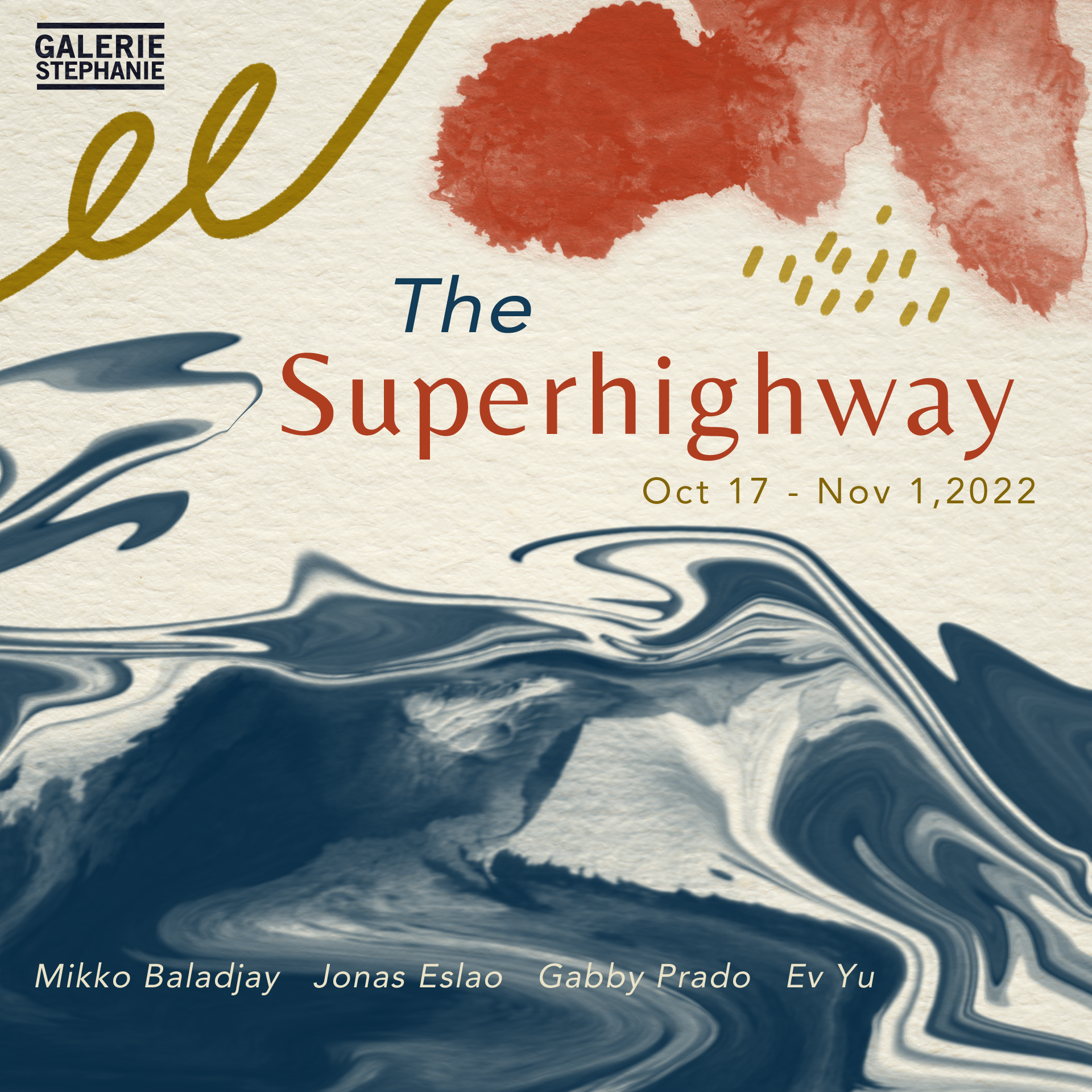 Whatever you have already thought of, whatever you’re about to think of, maybe even before you’ve even thought about it—it’s probably already out there. Every single piece of information, every single morsel of truth (and mistruth) and every germ of an idea ever conceived has been carried over and advanced through space and time and it’s an adrift, invisible, all-encompassing, floating free for all.

To wade through a typical, everyday 21st century life means to wade through a heavy sludge of media, data and information. We are all active participants in this daily slog— transmitters and inheritors of myths and histories, statistics and data, inventions and traditions, fictions and truths. In the group show The Superhighway, artists Mikko Baladjay, Jonas Eslao, Gabby Prado and Ev Yu excavate their everyday experiences to soberly appraise their understanding of a daily life constantly blitzed by choice and possibility, where the mindful sifting of elements to be received and transferred bear consequences of tremendous weight and value.

For this exhibition, Gabby Prado—whose art practice lies on her sensory experience of seeing the world—was prompted from her experience of a busy market day. Above the canopies of the stalls rose an intermingling of haggling human voices and an assortment of music from an assortment of radios, forming a cacophony of sounds. Within the transmission of musical notes and human voices interlaced with the reverberations of radio waves, Prado chooses to listen to the harmony embedded in the disorder of the dense stimuli of this bustling market chaos. In the two works entitled Unearthly Connection & Unearthly Connection II, the artist is not seen as one to shy away from tapping into her unique way of converting her sensory experiences into art. In Prado’s works we witness the most fundamental of transmissions: the nerve impulse across a synapse.

Jonas Eslao more recently has found himself utilizing household tools to create abstract expressionistic landscapes. Examining the physical terrain of Eslao’s works, orderly decisive incisions texturize and wound the surface. The textural repetition further embodies the idea the artist wants to elucidate—the palpable ripple effect of exchanges advancing over space and time. Eslao understands that these exchanges in the age of the Internet have lasting reverberations. For his works for The Superhighway, he makes use of discarded canvas cloth—frayed fibers, imperfections, fluff and all—as representation for all daily information congesting our consciousness. Content is consumed, regurgitated, tossed and forgotten in the age of the Internet. Do you remember the the very last meme you rolled in hysterics over? Perhaps nobody does.

For this group show, Ev Yu presents a series of small works on paper, no bigger than an outstretched hand. Though postcard-sized and diminutive, they are exact and elegant, showing firm control and skill over her chosen medium, watercolor. For The Superhighway Yu fixes her focus on the transmissions of speech, sound waves and vibrating energy—specifically the workings of the telephone—where its creation irrevocably revolutionized communication once and for all (it also set basic infrastructure on which the Internet was built). There is some humor thrown in too: one ear and another converse as a diptych in Devoured by Silence—resulting in what one could imagine to be the most soundless conversation that ever took place. In Procrastinating Little Bud and Balloon Static, we are able to recognize in her imagery the suggestion of a mechanical glitch of a static ink blot, disturbed ever so slightly by the subtlest of vibrations by some razor flat spatula. Here lies the special static-kinetic quality of her work—it possesses a razor-edged fluidity and belies a static force which awaits to be awoken and stirred.

In viewing Mikko Baladjay work, part of the effort lies on the beholder, because after all, much of art experience comes down to pattern recognition. To participate in a cognitive exercise, one must excavate memories (deliberately or unconsciously). His body of work prods and pokes our perceptions of the familiar and the new. Ode to Nothing I, II & III are not unlike Baladjay’s past work—each piece must be viewed as a whole, and as beholder that decision is of a knee-jerk immediacy, yet there is an unexplainable after-effect that lingers. The leanings of viewing a work spatially perhaps presents the antidote for our maladies of mass congestion. It is not so much in wiping the slate clean (in truth that might be an impossibility at this point), but a slower, more accurate manner of processing and synthesizing, may be what an effective rebellion against an onslaught of a super speeding (and super spreading) saturation, is made of.