To See For Oneself 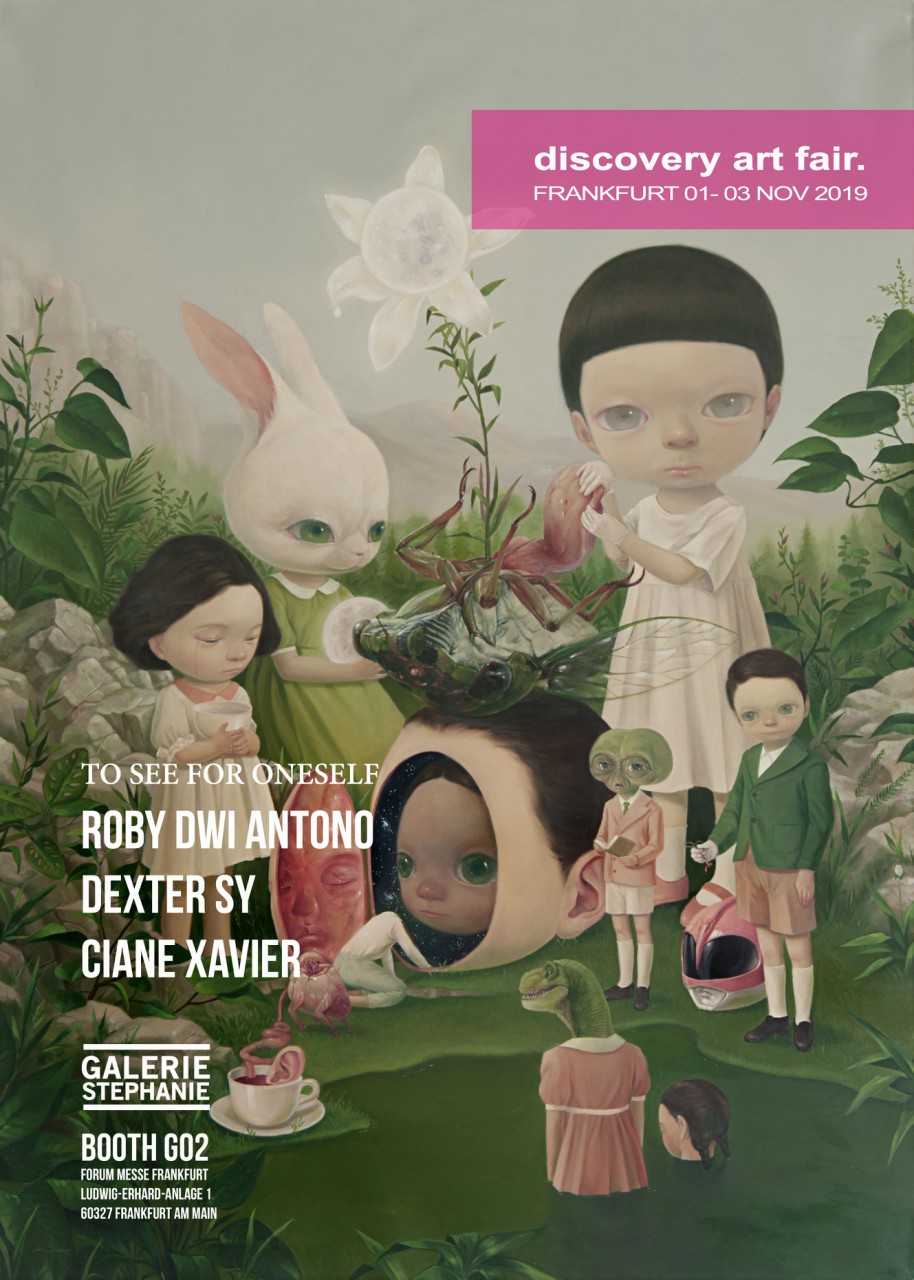 Galerie Stephanie presents “To See For Oneself” as curatorial and thematic anchor that will feature three contemporary visual artists: Ciane Xavier (Brazil), Dexter Sy (Philippines), and Roby Dwi Antono (Indonesia). The synergy of the works of these three artists manifests the delays and anticipations that not only the youth but the totality of the current societal generation belabors in terms of visual culture: We all have the capacity to create new histories based on how we choose our fragments. The three artists are attuned in their chose disciplines and styles which all rely on the creation of figures as a way to anecdote experiences, imagine atmospheres, or define identities. It only entails us to look into various aspects of our psyche—a personal autopsy of sorts.

As we graft new lines of worlds away from the World, the parallels of desire, products, and identities seem to swarm the landscape. The repertoires of the three artists presented as a collection in “To See For Oneself,” for the Discovery Art Fair 2019 nonetheless take advantage of this perception. The artists hail from emergent communities (whether by migrant, descendant, or cosmopolitan stature) and were brought up in domestic histories that acknowledge those webs of identity and yet are complicit of them.

Xavier hails from Brazil and has been a globe-trotter and is self-taught as a visual artist. Her paintings and sculptures depict multiculturality and nuances of migration as they “explore the boundaries of today’s society, touching upon globalization and the distractions of the millennial era.” In Manila, she had three solo exhibitions and was part of several group shows. Her pieces were also part of various art fairs and group shows both in the Philippines and in Europe.

Sy similarly hails from a diverse cultural background, being of Filipino and Chinese ethnicities, which translates in his philosophies as a visual artist and a college professor. In 2017, through the Philippine Artist Residency Program of Alliance française de Manile, he was able to have a residency and a solo exhibition at Centre Intermondes in La Rochelle, France. Prior to this residency in Europe, Sy had short stays (2011, 2012, and 2015) at the Haslla International Open Air Museum Residency and Haslla Art World Museum in Korea. He won the grand prize in the 2016 Philippine Art Awards, and was a consistent finalist in the competition since 2005. His works have been part of group exhibitions in cities in the Philippines and in Seoul, Tokyo, Manhattan, Singapore, Selangor, Jakarta, Kuala Lumpur and Los Angeles.

“To See For Oneself” will be in line with Galerie Stephanie’s participation in Discovery Art Fair in Frankfurt, Germany. The fair will be held at Forum Messe Frankfurt, Ludwig-Erhard-Anlage 1, 60327 Frankfurt am Main, starting November 1 to 3. For inquiries, kindly call the gallery at +632 7949 5726 or email inquiry.galeriestephanie@gmail.com