Welcome to the Playpen 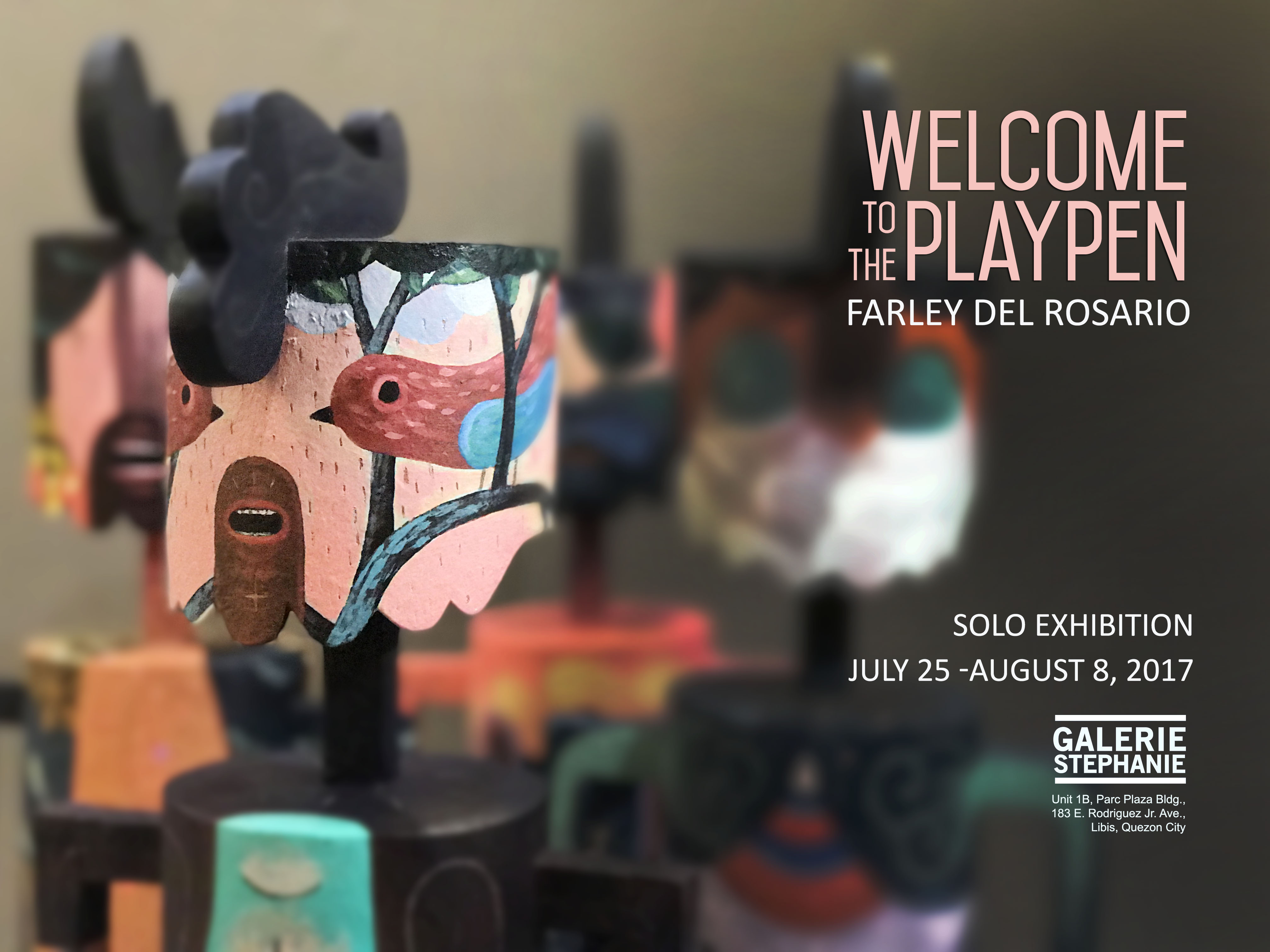 Betwixt and Between:
Farley Del Rosario’s explorations on the brink of reality and fantasy
By Kara de Guzman

Stepping into a museum, a collection of curiosities, or even a house filled with knick-knacks often feels like stepping into a different dimension. New, familiar, and strange things meet the eye –objects marking a bygone area or hinting at the idiosyncrasies of an owner. In these spaces a silent exchange takes place between the fields of the visible and the invisible. “What can be seen on display” says sociologist Tony Bennett, “is valuable and meaningful because of the access it offers to a realm of significance which cannot itself be seen.”[1]

Farley Del Rosario’s latest solo exhibition, Welcome to the Playpen, crafts such a dimension of materialized fantasy. He uses large canvases, mixed media sculptures, and shaped painting-sculpture hybrids as mediums for expression of self as perceived in the present, past, and imagination. He combines objects that evoke memories of a person, place, or time, with fantasy and spontaneity – creating whimsical realms that are unbound by the physical yet evoked by it. His style, borne from a desire to be unique yet sincere, is characterized by an effervescent energy tempered by a keen eye for balance and color. It is fitting then that Farley finds inspiration by taking a walk in the multifarious mania of shopping malls. The onslaught of colors and designs spark ideas that stew in his head until he puts brush to canvas – at which point the maelstrom coalesces directly onto the medium as a vivid two-dimensional daydream, without the means of a study. This has resulted in a style and visual language distinctly his own – his humanoid figures having pinched eyes, simplified bodies, and wiry limbs; his landscapes lushly colored and unheeding of time and space. Albeit filling mostly 2-D space, these images seem to be imbued with an innate ability for dynamic movement; looking as if they could move around their flat land with ease when the viewer is turned around.

As an artist active in the Philippine art scene for over fifteen years, Farley has had his own share of unique life experiences. His musically-oriented college days, the first forays into a professional art career, and starting a family in Olongapo reappear in one way or another in his artworks. His budding experiences as a father manifest in the large paintings Baby Walk and Without Permission. The former features a baby with a pacifier, bib, and rattle keys atop a four-legged high chair. As babies becomes able to sit up and eat solid foods, they move onto the high chair – this one in particular literally walking the baby away from the house hidden in the distance – signifying advancement in the baby’s journey to adulthood. Without Permission depicts two parents playing with an iconic shape-sorter toy. As they sit on a cushioned loveseat, various characters surround them – stuffed animals, one-eyed creatures, and a one-eyed four-legged teapot. The Shape-O-Toy is the focal point of the piece, speaking familiarly of the nostalgic sensation of the childhood flashback that comes with seeing toys we played with as children.

The exhilarating yet well-trodden experience of introducing new life to the world has not only prompted artistic explorations of his new roles as a father and family-man, it has also sparked Farley’s recollection of his own youthful days. As a musician, he used to dabble in genres like new metal and Latin romantic ballads, the latter now immortalized in the painting Tea for Los Panchos. In it, the world-famous all-guitar trío romántico perform aboard a furiously-boiling one-eyed kettle (looking much like the kettle in Without Permission) as it wades through a muted swirling sea interrupted by colorful stalks that resemble a squadron of submarine periscopes. His Jargonauts hearken back to vintage tin robot toys popular from the 50’s to 70’s, save for the addition of various styles of mohawks and pompadours – icons taken from Farley’s early days as an avid punk rock guitarist. The fifteen robots are decorated with an eclectic mix of images, from lucky cats and multi-colored birds to a sacred heart and David Bowie as Aladdin Sane. A combination of ‘jargon’ and ‘argonaut,’ the veritable rally of figures invite exploration of a world defined by images culled purely from Farley’s mind. His Daydream pieces, a series of five shaped canvases combined with sculptural elements, showcase the breadth of Farley’s imagination. Despite having never ridden an amusement park ride, he combines old-style rides with wind-up music boxes, the traditional game kadang-kadang, and sculptures, creating the effect of a layered diorama.

Welcome to the Playpen serves as a kind of transition point in the multiple identities Farley juggles. By combining the nostalgic with the present, the imagined with the real, the thrilling energy of the new with a heady longing for the old; he invites viewers not only to see, but to see through the artworks he presents. With his distinct visual language he playfully explores the liminal space in between seeing and believing, blurring the line between fantastical and perceptual. Despite his imagery taking shape from the unique memories and associations purely his own, Farley uses the communal nature of art to widen his horizon of meaning. By using familiar icons like baby toys, musical instruments, Darth Vader, and teddy bears, he knocks on the doors to realms of meaning hidden in the mind’s eye of each viewer, inviting everyone out to play.

Farley Del Rosario is a young contemporary artist of the faux naïf genre. In 2009 he was recognized as one of Nokia’s 10 Most Exciting Young Artists. He has graced the annual Fookien Times Publication and the Philippine Yearbook 2006 with works complimenting the essays of Philippine National Artist F. Sionil Jose and other known writers. He provided illustrations for the children’s book “SOL, A Legend About the Sun” which was nominated for the Cardinal Sin Catholic Book Awards and was a finalist at the Romeo Forbes Children’s Story Writing Contest. Farley has had numerous solo and group exhibitions, including Canvas Gallery, the National Commission for Culture and the Arts Gallery, and Art Stage Singapore 2016 to name a few. He has also been auctioned off at Leon Gallery’s 2015 ‘Magnificent September Auction’. Since moving to Olongapo with his family, Farley has launched ‘PICASO’ a community of artists from Subic and Olongapo in the hopes of further energizing the existing local art scene.

Farley Del Rosario’s Welcome to the Playpen will hold its Artist Reception on July 25 (Tuesday), 6:00 PM at Galerie Stephanie, located at Unit 1B Parc Plaza Building, 183 E. Rodriguez Jr. Ave., C5, Libis, Quezon City. The exhibit will be open for all to view until August 8, 2017. For inquiries, call us at (02) 709 1488 or send us an email at inquiry.galeriestephanie@gmail.com.