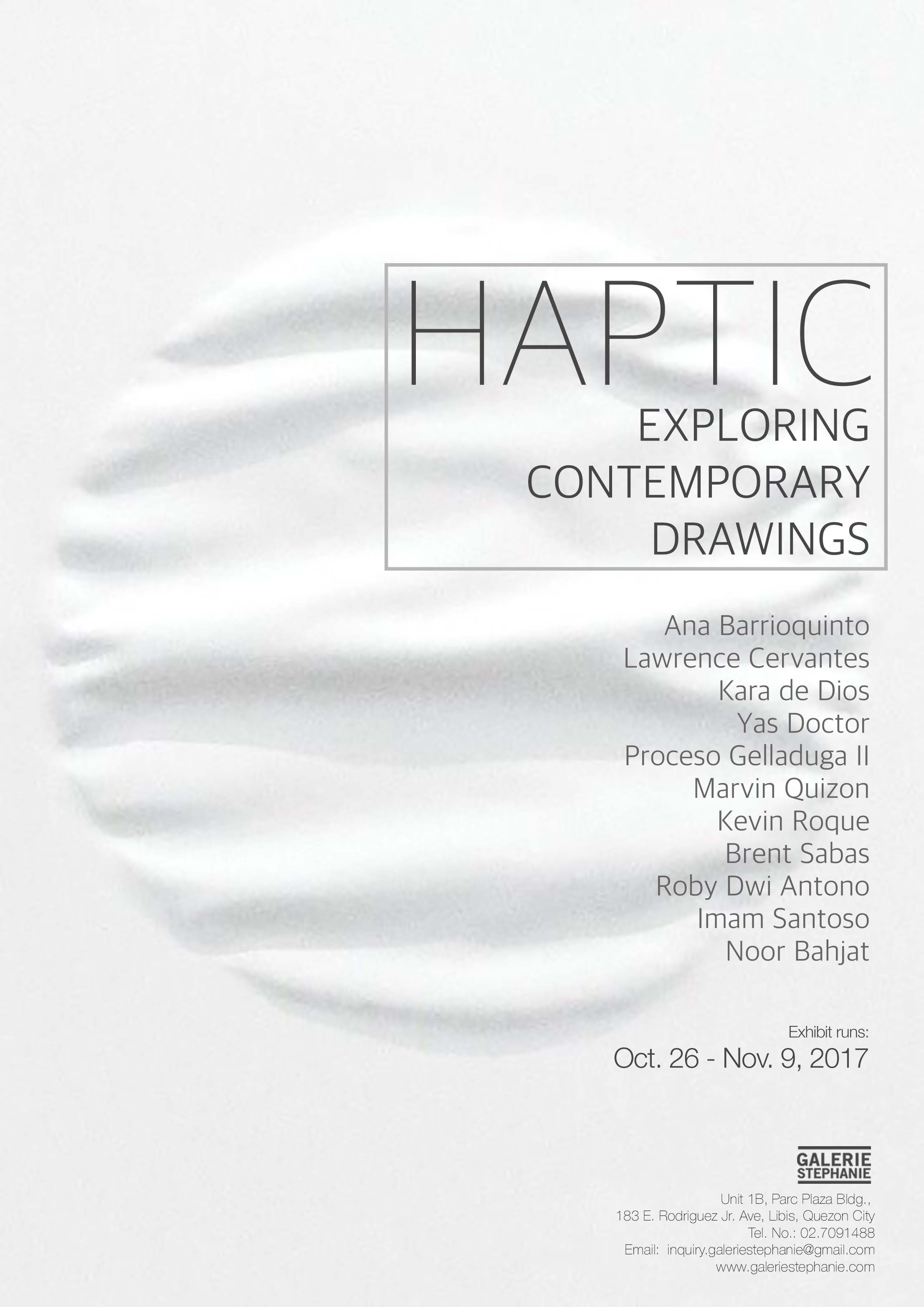 Graphite, charcoal, pen, and pastels – a few of the numerous instruments used to mark two-dimensional media in the ancient art form of drawing. It is a means of expression, communication, problem solving, data representation, documentation, and many more. In essence it is a way of making sense of the world that is as old as humanity itself. In honor of this craft, contemporary art gallery Galerie Stephanie presents its third annual drawing exhibit entitled “Haptic: Exploring Contemporary Drawings.” Local artists Ana Barrioquinto, Lawrence Cervantes, Kara de Dios, Yas Doctor, Proceso Gelladuga, Marvin Quizon, Kevin Roque, and Brent Sabas, together with Indonesian artists Roby Dwi Antono and Imam Santoso, and Syrian artist Noor Bahjat celebrate the art of drawing beyond its use as a simple sketch or study. The process of drawing takes abstract multidimensional thoughts from the mind’s eye to the hand’s grasp. Referring to the perception of objects through the sense of touch, this exhibit likens drawing to a tactile method of knowing the world that is within and without. It seems fitting that the gallery’s last exhibit before it moves to its new location in Shangri-La Plaza Mall centers on drawing. Often, drawing is the raw translation of thought to two-dimensional form; a preliminary exploration of what one’s brain has done to the world. In the world of art and its history, drawing was widely regarded as the foundation for artistic practice. When paper came into wide circulation in the 14th century, drawing became a tool to study nature en plein air, to practice human anatomy, and to make preparatory drawings or studies before the actual painting, mural, mosaic, etching, etc. was made. The practice fell out of fashion with the rise of impressionists who painted directly on the canvas, and with the invention of photography, which changed the landscape of art itself. Instead of only being used to accurately represent visual phenomena, drawing has become more open to abstraction and imagination. The eleven artists included in Haptic illustrate the diversity found within the medium of drawing, communicating a wide array of ideas from politics and culture to the role of economics in the life of the artist. Indonesian visual artist and conservator Imam Santoso presents a series of ball pen drawings in stark black and red. They tell a story of diaspora – a phenomenon familiar to many in East Asia – of people leaving their place of origin for pastures unknown. Even as they journey to far-off places, meeting new people and experiencing new things, they take their home wherever they go, their names evidence of their clan. A solitary figure in “Ancestor Bones” carries on his head a longhouse – ominous smoke rising from behind its dark windows. Amidst a desolate landscape he steps down from a horned skull – possibly his ancestor’s. In contrast, the scenery in “Before He Leaves” is more frantic. A lone red figure floats above a smoking house. Beside it, a lavishly decorated tea table hosts a teacup, a pack of cigarettes, and a stack of burning books. Their titles read ‘HERITAGE,’ ‘AMULET,’ ‘CULTURE,’ and ‘VALUE.’ Filipino visual artist and art director Brent Sabas presents “Baboy” (Pig) of his Mga Animal series. In it, a pig-headed woman is clad in a terno Filipiniana with butterfly sleeves and a lavish brooch cascading down her bosom. Young Bulakeño artist Marvin Quizon showcases one of the classic subjects of drawing – the female nude. The quintessential pose highlights the artist’s technical skill in expressing tonal values and textures. Yas Doctor’s “Rebirth” is a melancholy exploration of the events succeeding the physical death of the body. The viewer stands across a body of water, witnessing as a gigantic female torso cracks open lengthwise, emitting undulating wisps of translucent mist that merge into a mountainous landscape, which then cascades into the wavy hair of a woman floating upright, back into the open torso. She explains, “all of us experience many ‘endings’ in order to make way for growth. I like to think that death is not limited to its literal meaning.” One of drawing’s many appeals is that it communicates to us so directly. Drawing belongs to everyone – whether it’s doodling during a lecture, making someone a map, or applying make up; we are all mark-makers. Drawing is interdisciplinary – it is used to make road markings, to illustrate mathematical concepts, and to map constellations. The process of making marks in order to make sense of the world is as universal as it is meaningful. The group exhibition Haptic will be open for viewing at Galerie Stephanie from October 26 until November 9, 2017. The gallery is located at Unit 1B Parc Plaza Bldg., 183 E. Rodriguez Jr. Ave., Libis, Quezon City. For inquiries, contact the gallery through their landline at (02) 709-1488, or email them at inquiry.galeriestephanie@gmail.com. 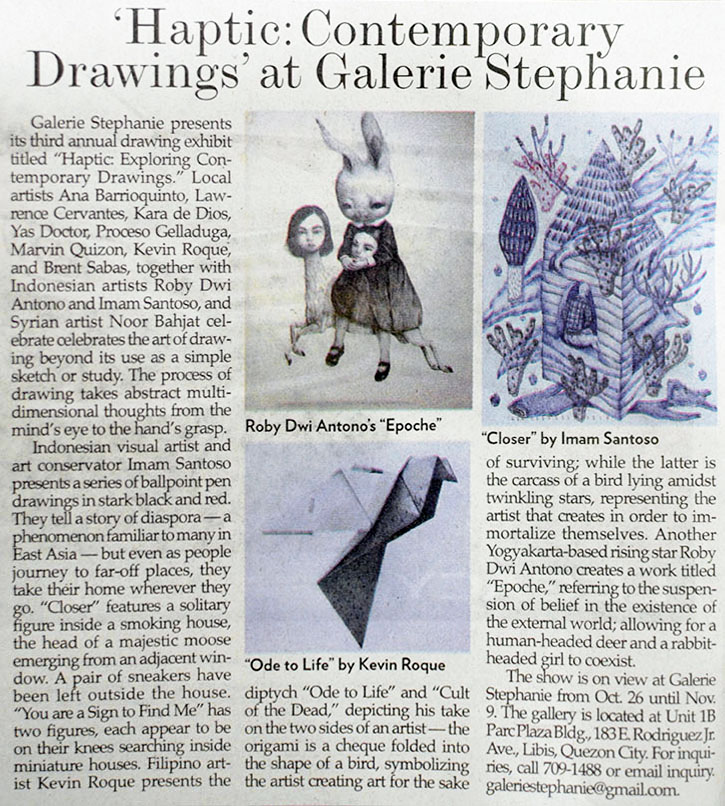