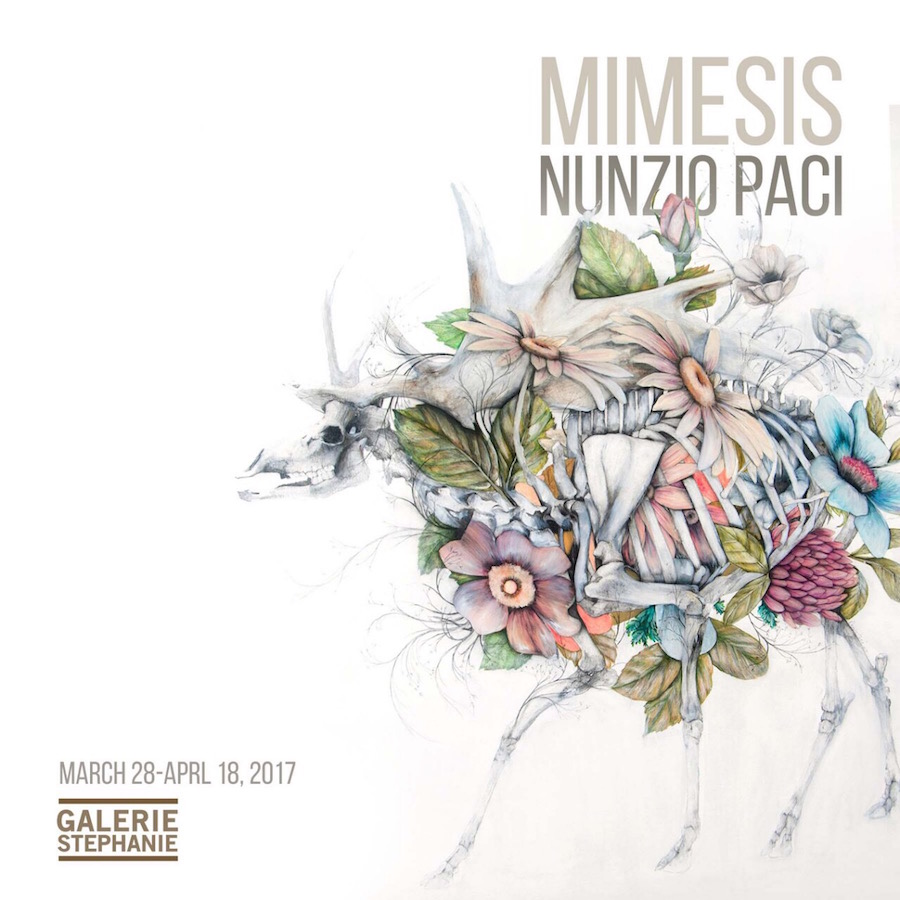 In a large forest in Norway where snow covers the land 200 days a year, an old tree has stood sentinel since the time when the British Isles were still connected to Europe. Named Old Tjikko, this Norway Spruce has lived for nearly 10,000 years. The average human lifespan is .0079% of the age of Old Tjikko—if it were to blink, it could miss us. Still, the tree and its observer are closely interwoven in a cycle that is inconceivably old—a primordial vein that stretches unfathomably into the future. Italian artist-anatomist and Galerie Stephanie’s latest artist-in-residence Nunzio Paci possesses a breathtaking ability to reconnect these beings, reaching through the warp and weft of time to paint figures of regeneration that coalesce what has passed with what has yet to come.

Born in 1977 in Bologna, located in the north of Italy, Nunzio was classically trained in the Fine Arts. But his preoccupation was not with the typically beautiful—rather, he seemed to obsess over the thought of becoming seriously ill. The anxiety about one’s health is called hypochondria, and is what drove Nunzioto study diseases, then generalized and pathological anatomy, and finally human, animal, and comparative anatomy. As a result, his art, which combines strict verisimilitude to anatomic structure with various flora and fauna, is a way for him to exorcise the fears he lives with daily. Using graphite, colored pencils, oil, and acrylic applied through a hybrid of painting and illustration, Nunzio faces his neurosis by looking barefaced at mortality and the transience of creation. The result is human figures—young and old, beautiful and macabre—with their internal structures exposed for all to see. The scene is not one of gore, rather it seems to restore humanity’s lost connection with nature; aortas evolve into thick tree trunks, ligaments become flower stalks, and veins creep outside the body, mimicking spindly branches upon which bluebirds perch. This is Nunzio’s quest for artistic and self-awareness, to confront existence and the never-ending feeling of uneasiness through achieving a balance between reality and imagination.

The maturity of his subject as well as the extreme care with which he produces his profoundly beautiful works has seen him exhibit around Europe, the United States, and Asia. His drawings, paintings, and sculptures have been shown all over Italy: at the Bologna Anatomical Wax Museum (2011, 2016) the historic Fogazzaro Palace (2011, 2012) and at the industrial complex turned exhibition space Fabricca Saccardo (2012) before he was signed onto the Milan contemporary art gallery Officine dell’ Immagine in 2013. Afterwards he exhibited at the Museum of Contemporary Art in Sicily (2013), the Oxholm Gallery in Denmark (2014), at HERR BEINLICH in Germany (2015), and Art Stage Singapore (2016). Nunzio has also been featured in a number of publications, from WideWalls and Hi-Fructose to Vice’s Creators series and most recently in Anatomy Rocks, a compilation of over 60 international artists that reinterpret anatomy in various spectacular fashions. He has been the recipient of six residencies in Sweden, China, and Norway; with this three-month residency under Galerie Stephanie in the Philippines being his latest.

Mimesis, Nunzio Paci’s first exhibition in the Philippines will hold its Opening Reception on Tuesday, March 28, 6:00 P.M. at Galerie Stephanie, located at Unit 1B Parc Plaza Building, 183 E. Rodriguez Jr. Ave., C5, Libis, Quezon City. The artist will be present for the duration of the evening’s reception. For inquiries, do not hesitate to call us on our landline at +63 2 709 1488, or email us at inquiry.galeriestephanie@gmail.com. The exhibit will run until April 18, 2017.

Before coming to the Philippines, Nunzio already had the seed of an idea planted in his head. In his mind he imagined the country to be of a thriving and lush nature, and he was not disappointed. His paintings’ themes of rebirth and regeneration found vigor anew in the vibrancy of Metro Manila—its cities, its nature, and its people. As a culmination of his three-month stay, Nunzio presents a solo exhibition entitled Mimesis. An Ancient Greek word that means “to imitate,” the concept of mimesis has nagged thinkers the world over, from Plato and Aristotle to Sigmund Freud and Jacques Derrida. In this new series of works, Nunzio focuses on evolutionary mimicry—a phenomenon where creatures seem to copy another’s physical traits, as in the case of stick insects, katydids, and many butterflies and moths. It is “the fight that life and nature apply to keep on perpetuating through generations,” as Nunzio says. The need to visualize this concept brought about the cleaner, brighter canvases of Mimesis, heavily dominated by Philippine flora painted in light pastel colors previously unknown to his oeuvre. The three largest pieces feature deer from Norway—Nunzio’s last residency was in late 2016 at the Nordic Artists’ Center—in varying states of suspended decay: in L’errore dell’inquieto (The Error of the Restless) a deer bounds gracefully across the space, exposed musculature sprouting large blooming flowers and clumps of berries; Evasione di un pensiero (Evasion of a Thought) features a skeletal deer with majestic antlers whose ribcage is filled to bursting with flora both large and small, rendered in soft-hued colors as if melting into the snow. Yet other works feature the head and neck of unidentifiable human figures, their faces obscured by veritable bouquets of intricately illustrated flowers. Nunzio takes the concept of mimicry and gives it a broader meaning; fauna and flora not only copy one another, they enmesh themselves in each other’s existence, forming a cohesive organism that exudes life within the confines of Nunzio’s canvas. If evolutionary mimicry is a defense against predators, the ultimate mimicry of one entirely becoming another is a defense against the totality of the outside world, an attempt to disappear into the other so fully as to render oneself invisible; to enter, in his words, “a refuge where boundaries cannot be crossed”.

In Kurt Vonnegut’s satirical 1969 novel Slaughterhouse-Five, the unreliable narrator Billy Pilgrim recounts the time he was captured by aliens called Tralfamadorians who are able to see in four dimensions. “The creatures can see where each has been and where it is going,” says Billy, “[the] Tralfamadorians don’t see human beings as two-legged creatures, either. They see them as great millipedes—‘with ‘babies’ legs at one end and old people’s legs at the other’.” In the creatures Nunzio Paci paints—creatures that copy each other endlessly until one ends where the other begins and vice versa—it seems Nunzio not only shows us the truth of our eventual decay, but also shows us the penultimate death (never the ultimate) only the temporary end of one form as it regenerates into another. Like the Tralfamadorians, he sees the great millipedes of existence of humans, animals, and plants as they stretch from one form to another. With an artistic gaze he takes slices from the expanse of each life and stitches them together to communicate the knowledge of our intertwined existences. Despite a human lifetime passing by in a heartbeat for the world’s oldest tree Old Tjikko, we are inseparably binded by the same matter we are made of, and shall return to. In dealing with the challenge of trying to understand his own mind, Nunziohas realizes that self-awareness does not lie only within, but also without. We are intimately entwined within the infinite possibilities of life, and to restore our connection with nature is to restore our connection with ourselves.

In Mimesis, Nunzio Paci takes the typically clinical study of human and animal anatomy, removes it from coldly laid out textbooks and neatly-labeled diagrams and reintroduces discomfort, imbuing it with context surpassing the lived experience of the once living and breathing human being. Exposing the mechanisms that operate us, muscle fibers, straining ligaments, and sturdy bones, it is a fresh reminder of life’s perpetual struggle—an ongoing product of billions of years of generation and regeneration. 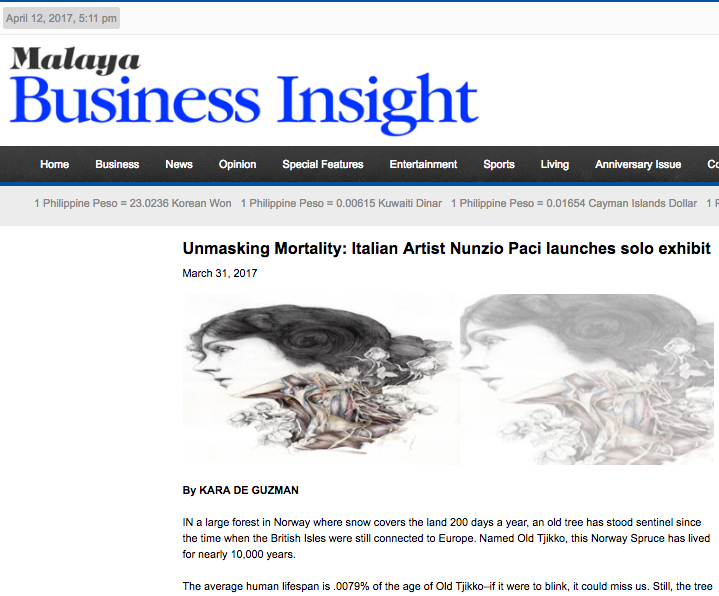 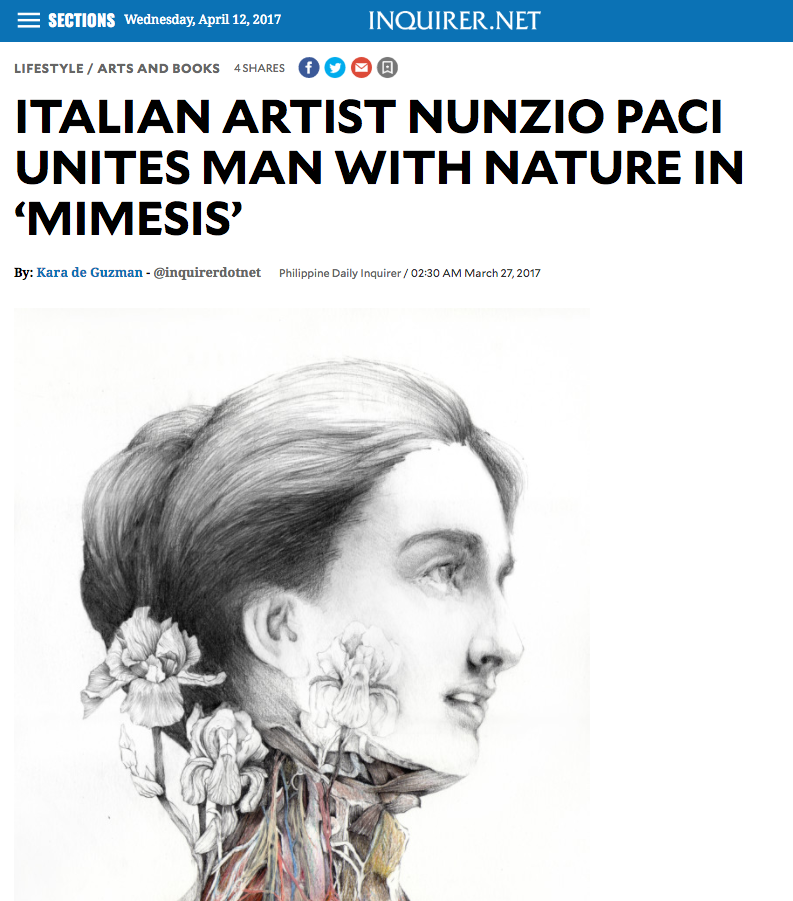