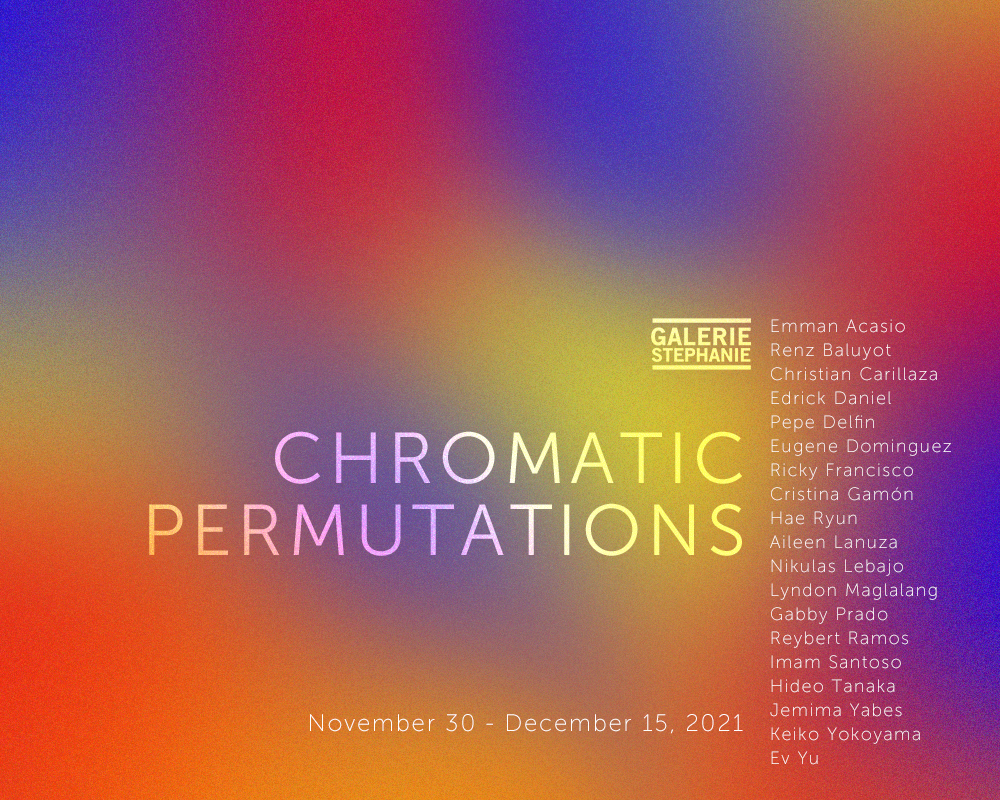 Color is considered the most fundamental, and yet, the most relative element in art. There are hardly identical visual perceptions of color— a single hue may evoke countless readings. Seeing color is strongly anchored on the recognition of the in-betweens of palettes; as well as the placing of the subjects. As creative beings, seeing things singularly is not considered seeing at all.

To visually expound, Galerie Stephanie has gathered artists as an experimental survey. Providing the universally accepted primary colors as their prompts, Chromatic Permutations presents works that give the viewer a more intimate interpretation of the popular color spectrum.

Typically regarded as the color of vitality, passion, and impulsion, the spectrum of red is in its full range, as seen in this collection. The eloquent interaction of the palettes not only highlights the assigned color, but also gives fluency to see the works beyond the sum of its parts. Take for instance the work “Dissimulation” by Lyndon Maglalang–at first glance, the diptych calls attention to its evocative blue. Consistently calm and contemplative, the artist’s use of rose taupe envelopes its lone figure, depicting concealment. This technique is also evident in Eugene Dominguez’s “six o’clock in the morning”—the relatively minimal application of terracotta sets the scene’s humid ambiance. Meanwhile, Reybert Ramos’ props up the color red for his hybrids’ dignified regality. As for the artists Hideo Tanaka, and Aileen Lanuza complements the visualization with the language of flowers—Lanuza with her unabashed femininity, Tanaka’s candidness and subdued sentimentality. Combining unlikely geometric forms in Ev Yu’s “Rose Colored Lens” series, her kinetic abstractions lead us to see other elements in which we are confronted physically. Lastly, Keiko Yokoyama’s tender representation of the color is captured in her works “Rabbit Doll Eye” and “Rabbit Ruby Ring”, tempering an otherwise powerful hue.

Yellow has always been associated with feelings of enlightenment and renewal because of its luminescence. Being the brightest color in the spectrum, it invigorates a certain feeling of warmth, comfort and positivity. These same feelings are collectively evident in the works of Emman Acasio (“Supreme Consciousness Rising”, where scales of a golden snake writhes as a symbol of good favors about to come), Hae Ryun (“The Greeting of the Night I and II” depicting the crisp autumn leaves being blown away into the coming of winter akin to a bittersweet farewell), Christian Carillaza (“Aninag” capturing a sense of guidance and security from the diptych’s lone illumination in contrast to the the thrashing of the waves) and Nikulas Lebajo (“Vegan Women” and “Vegetarian Women” creating an soft, feminine allure). Other artists, however, used the color yellow as a subject, a nod to the historical development of the color itself—from being used as a contrast to deepen other shades to being the focal color of the entire piece. We see this in Gabby Prado’s “Blush” and “Some Yellow”, Pepe Delfin’s “Dreams End at Sunrise” and “Secret Lives Begin at Sunset”, and in Hae Ryun’s “Yellow Forest” and “Free As a Bird”. These artists did not shy away from highlighting this jovial color, portraying it in its strength and its boldness, all while maintaining an array of cool and dark swathes to complement its brilliance.

Over the course of history, visual artists have utilized the variations of Blue, basing on the belief that the hue boosts feelings of calm and productivity. Regarded as the most popular among the colors, blue exudes a feeling of transcendence into the vast openness, and a deep connection with one’s ethos Historically, it was ideally made for royalties and significant religious icons such as the Virgin Mary. Due to its place in history and its rarity in nature, it was often seen as an expensive pigment. Blues in this exhibit portray an analogous emphasis on these as well, with peculiarity in Cristina Gamon’s “Blue Banana Lagoon” and Imam Santoso’s “The Dead Tree” and “Kesunyian” being a principal narrative. In an emotional sense, however, Renz Baluyot’s signature depiction of skies in richer shades of blue encapsulates serenity and the surrender to it. While blue in Baluyot’s works portray calmness in space, Edrick Daniel’s “Blue Boy” and “Bubble” narrate the opposite—calmness amidst limitations. On the other hand, Ricky Francisco and Jemima Yabes presented works that symbolically deny the presence of blue and paradoxically emphasize its significance more. The red meats in Yabes’ works strengthen the meaning of blue having the lack of life (evident in “Barely Alive” and “Heads On”) and Francisco’s use of gradation in “Hue of Revelation (Blue)” uncover more of their characters in their secrecy.

Chromatic Permutations, in a way, not only present colors for how they are universally perceived but gives the audience an intimate glimpse of the representations that were available to the artist that they colored as experiences. These collections of works not only presented themselves as a singular impression of an experience, but likened the nuances of their narratives to the nuances of the vast color spectrum itself. That, despite not always being seen in the exact hue they are presented, are still just as pure and as personal.