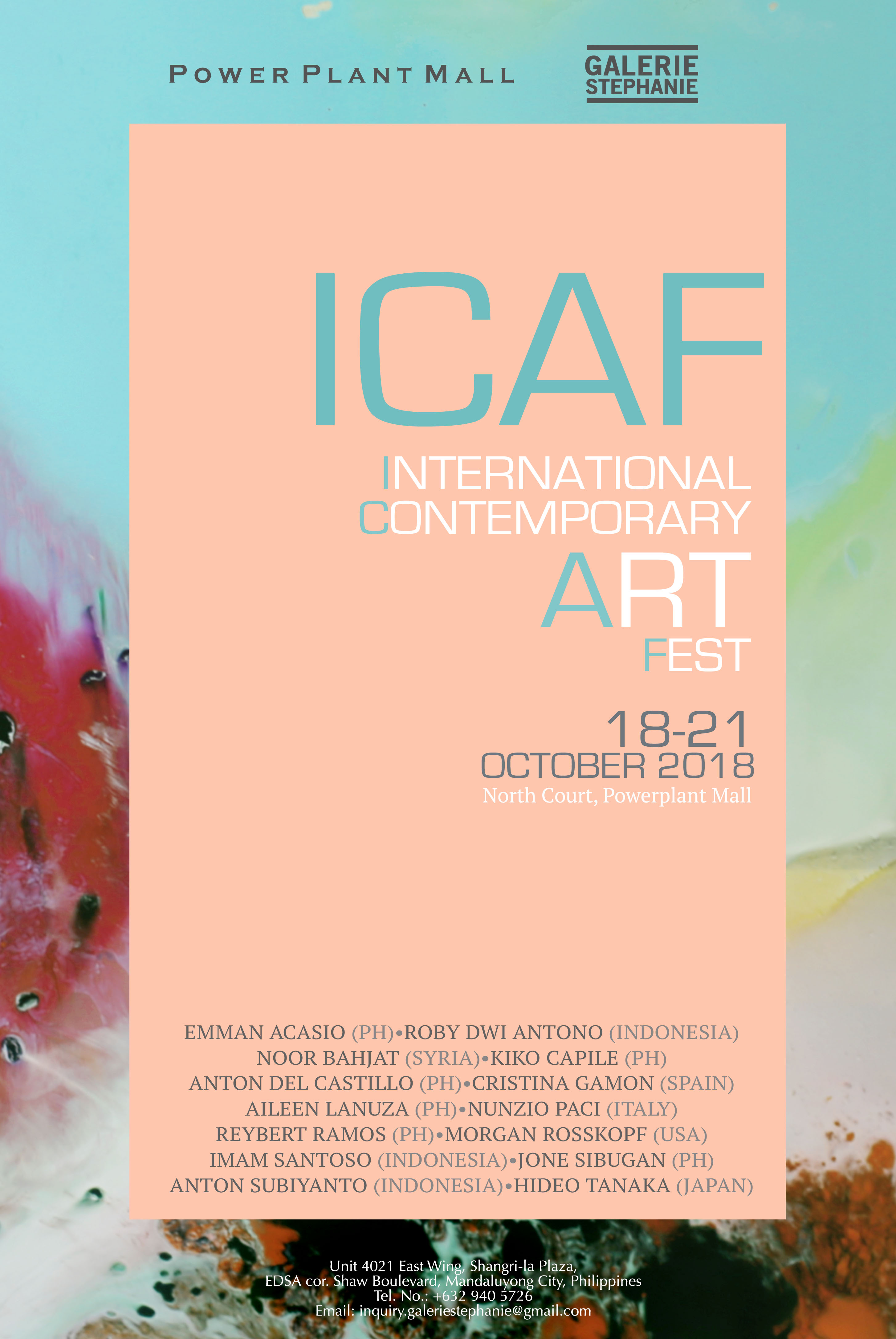 Galerie Stephanie stages its first International Contemporary Art Fest as a celebration of the diversification and growth of international artists in the Philippines.

Since 2015, Galerie Stephanie has been welcoming foreign artists in the Philippines, beginning with UOB Painting of the Year Grand Prize winner for Southeast Asia, Anton Subiyanto from Indonesia. Eventually, the artist-in-residence program has constantly been an active annual project of the gallery, allowing its collectors and artists to have a view of the current multidisciplinary practices and have creative cultural exchanges from artists all around the world.

Part of the international roster are Galerie Stephanie’s past visiting-artists and artists-in-residence like three artists from Indonesia namely Roby Dwi Antono, Anton Subiyanto, and Imam Santoso, Noor Bahjat from Syria, Nunzio Paci from Italy, Cristina Gamon from Spain, and the current one being mixed media artist Morgan Rosskopf from the USA. The gallery will also be showing the artworks of Hideo Tanaka, a hyper realist artist from Japan, for the first time in the Philippines.

The gallery’s set of foreign artists present a characteristic variety of creative processes and philosophies. For instance, Cristina Gamon, the gallery’s first foreign abstract artist and artist-in-residence this 2018, utilizes her intelligent eye for color combinations and applies them on large acrylic sheets; while Noor Bahjat, a young Syrian artist based in Dubai, presents powerful expressionistic renderings to complement the overall collage outlook of her works. However, ICAF is also an avenue to show a comparative perspective of similar genres, like the hyper realistic figures done by Nunzio Paci and those done by Hideo Tanaka—both display incredible executions, but still coincidentally present cultural variation through their subjects.

Intricate mixed media artworks of Morgan Rosskopf will also be on display, giving the viewers a glimpse of her upcoming solo show with Galerie Stephanie this November 2018.

Although this exhibit is mostly comprised of foreign artists, Galerie Stephanie also included Filipino contemporary artists whose skills and techniques are of international caliber. These include Anton del Castillo and Reybert Ramos, who already began making noise in Southeast Asia through various prestigious art fairs; and Jone Sibugan and Kiko Capile, newcomers in the industry, but display immense potential through their distinctly surreal and poignant artworks. Included also are fast-rising contemporary artists Aileen Lanuza and Emman Acasio, both fresh from well-received solo shows in Galerie Stephanie this year.

Anton del Castillo, whose works has been exhibited in Beijing, Hong Kong, New York, Malaysia, Singapore, and Tokyo, lends his Biblically fuelled sculptures illuminated by modern ideals. Reybert Ramos, best known for his hyper realistic superimpositions of popular figures and human-dog hybrids, question the way we humanize things (in this instance, dogs) and how what it tells of society’s psyche. Both Reybert and Anton tap on socio-political aspects of humanity as major themes of their works.

On the other hand, the up-and-coming artists like Jone Sibugan and Kiko Capile, already capitalize their individual styles in making their mark in the industry: Jone’s particular use of mushrooms on his artworks amidst dystopian settings, and Kiko’s immensely detailed pen and ink illustrations of grotesque figures.